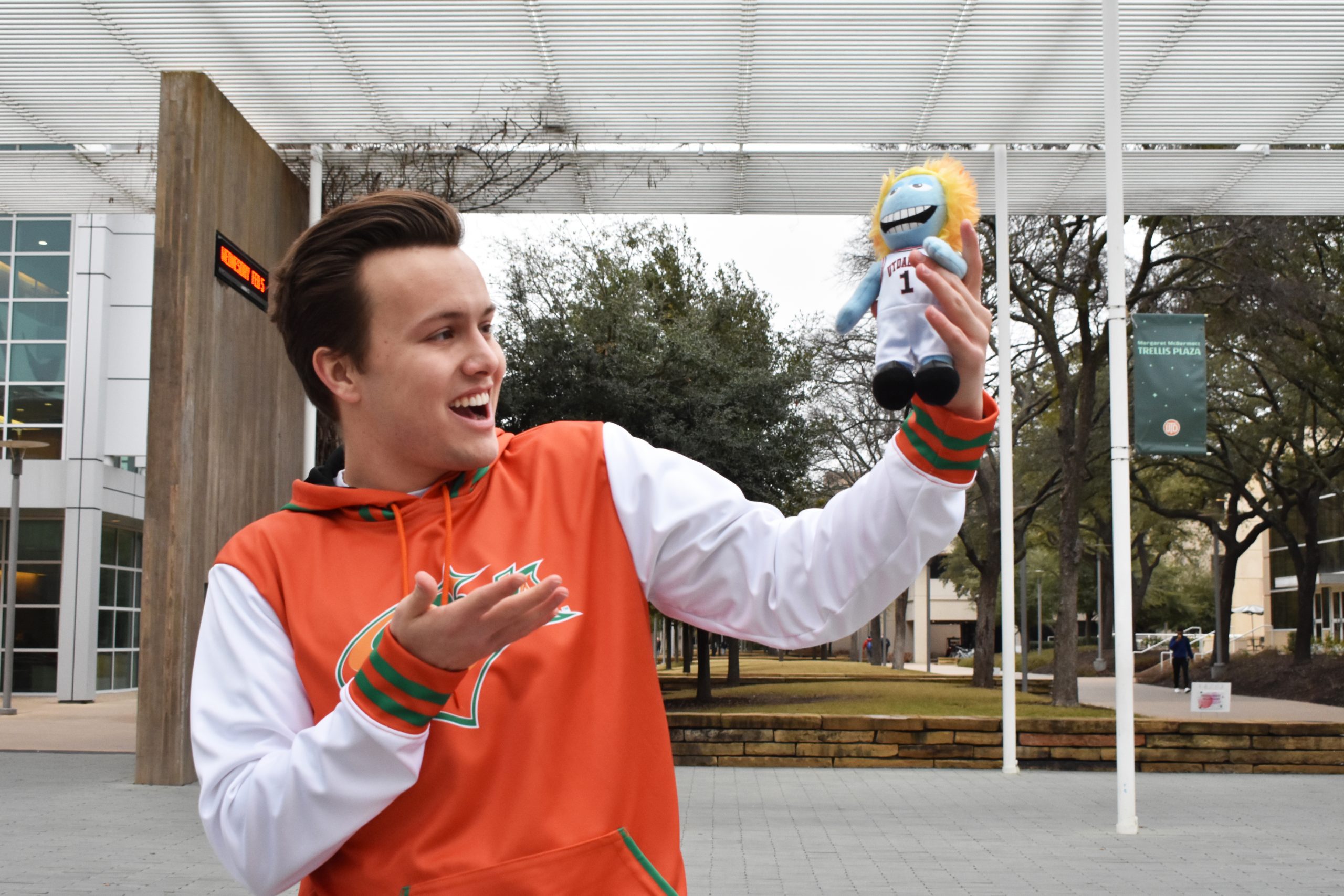 He calls himself the sorcerer of school spirit, his personal Instagram is a mosaic of green and orange and Temoc flashes across multiple posts. Entrepreneurship and marketing sophomore Eric Aaberg takes school spirit to a whole new level, and he wants to share that with other students.

Aaberg is the president of Comet Life, a student organization he created his freshman year, runs the JSOM and UTD Spirit Instagram accounts, works as a Peer Advisor in the Residence Halls, is student director of esports and works another remote job.

“A lot of my free time goes back into UTD because I take joy in it. When I came to UTD I definitely fell in love with the culture we have here, and I really wanted to spread that to other students,” Aaberg said. “We are not a traditional university as we’re only 50 years old, so school spirit is really a bit different. I would say it’s growing, it’s not as big as I would love it to be and I’d love to change that.”

UTD was not Aaberg’s first choice, but he said he postponed applying to college in general. After an unsatisfying experience the first three years of high school, he transferred to JJ Pearce High School for his senior year. There, he created a club called Remain Happy and joined the swim team.

“The number one lesson I learned was, and this was from Twitter, ‘If you learn one thing from high school, it’s that do not be afraid of what other people think of you,’” Aaberg said. “From that I really took into perspective that I can do whatever I want, be whoever I want and it’s the peoples’ choice to accept me or not.”

At first, he said he viewed UTD as a commuter school and while orientation changed his initial perceptions, he did not expect to be as involved in school spirit as he is. One way he got involved was by creating the aforementioned UTD Comet Life Instagram account.

“In my freshman year, I missed Comet Camp, so I wanted a way to connect with these students. Through that, I was able to actually get to know all these people from Instagram,” Aaberg said. “I still have a lot of people come up and be like ‘Oh my gosh I know you from Instagram.’”

University administration has been supportive, Aaberg said, and now, the organization consists of more than 20 volunteers, a majority of whom are freshmen.

“I’m not surprised. Every incoming freshman class has more spirit,” he said. “Even President Benson said in the State of the University Address we just see more school spirit every year.”

In regards to his school spirit, Aaberg received negative feedback and has been told it is “cringey.”

“(School spirit), it’s a new idea in a sense, something you expect at other colleges but when people come to UTD it’s kind of expected that there’s no school spirit,” Aaberg said. “Honestly, cringey is just something other people are too afraid of doing themselves. If I’m going to be called cringey for having school spirit, it just means I’m doing something out of my comfort zone. But it really doesn’t bug me because it’s what makes me happy at the end of the day.”

Aaberg puts in 20-40 hours per week in extracurriculars that are related to UTD. Time management and Google calendar allow him to be involved in these various organizations.

“Being so much out there you have so many people watching you, and it feels like that’s a lot of stress and responsibility sometimes and people don’t really see that unless you’re in that position,” Aaberg said. “Yeah obviously I do get tired sometimes, but when it comes to school spirit, it’s definitely something I harness energy from, in a sense, and (it) really motivates me.”

Though he said does feel drained when there’s a lack of school spirit among students.

“When we go to certain sports games or even the Homecoming parade, it’s kind of sad to see that so much work is being put forth to these programs and not even 100 people seem to be out at the parade,” Aaberg said. “It’s something that needs to be addressed, maybe they have tried, and I just haven’t seen a public statement about it, but this is something that I’m passionate about helping with.”

Aaberg encourages students to go to games, and other student life events.

“I want to create a call out to students, just take this advice,” Aaberg said. “Hey look, you’re at UTD, whether this is your first choice or not, take pride in it. If you’re here for the next six months or even four years, make the best of it. Go out to games, go out to do things, take pride in your university, take pride in getting involved on campus. It’s really going to improve your life, your academics, and when you look back you don’t want to have regrets. Get involved, go do these things; you’ll definitely have fun.”