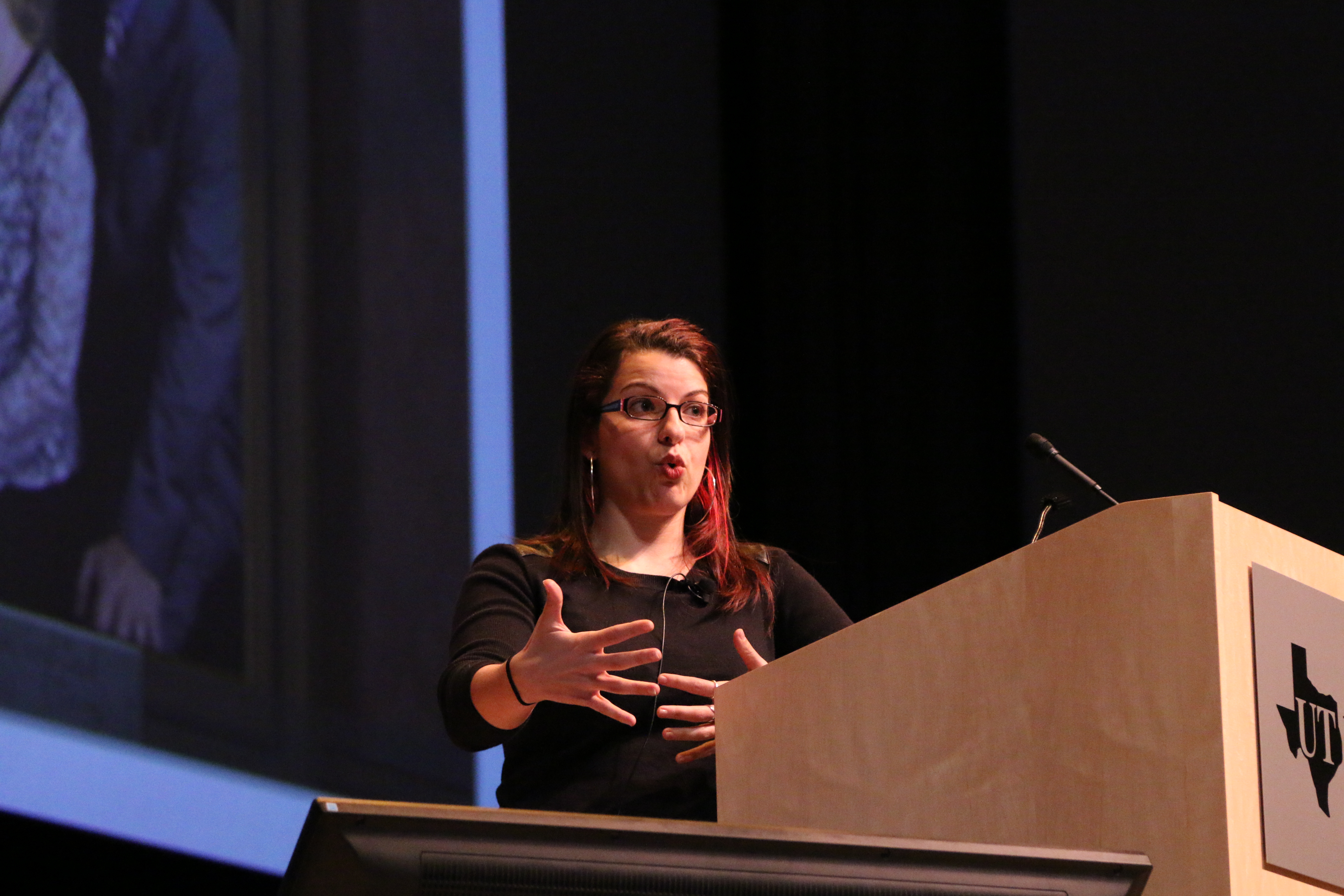 Since she was just old enough to play her first Gameboy, feminist media critic Anita Sarkeesian has been an avid female gamer caught in a male gamer-dominated world. These days, she’s trying to change that.

Sarkeesian visited campus Feb. 11 to talk about sexist impressions in video games at the lecture hall in the Edith O’Donnel Arts & Technology Building. Her Feminist Frequency website is meant to examine a variety of media from a feminist perspective. A video series titled Tropes Vs. Women in Video Games was the basis for her presentation.

During her lecture, Sarkeesian focused on eight ideas in gaming that objectify and demean women, which she said many developers are guilty of propagating. One of the concepts, which she named the “Smurfette Principle”, calls out the way many developers create uneven character choices for gamers.

“In most games, men are the default and women are the other,” Sarkeesian said.

She said, there needs to be fairer representation in the medium. Her solution was for developers to give gamers varied options.

“If we’re going to have games that involve shooting hundreds of people, I’d like to see them equally portrayed as their male counterparts,” Sarkeesian said.

Sarkeesian is no stranger to virtual violence. Her work faced a major backlash in the Gamergate controversy, a debate that started in 2014 surrounding a chain reaction of events in the video game industry that resulted in threats to her and other women.

Another trope she mentioned, titled “What about the Menz” responded to the false equivalency that some gamers make about the way developers portray men as hyper-masculine giving them the impression that male character portrayals are unrealistic.

But she deconstructed this idea by showing the audience that there are really a variety of male characters in many games – masculine and otherwise – while women are too often portrayed as the damsel in distress.

“There’s no standard oppressive social construct in the sexualization of male characters,” she said.

She also suggested that they use real pain sounds instead of sexual noises when female characters are in a fighting situation. Part of her lecture briefly touched on fairly portraying women of color in games aside from the stereotypical exotic fantasy.

“When you find there’s so many ways to make a game, you’ll discover there are so many different stories to tell,” Sarkeesian said.

When you find there’s so many ways to make a game, you’ll discover there are so many different stories to tell.

Matthew Brown, director for the Center for Values in Science, Medicine and Technology, chose Sarkeesian to speak as part of the 2015 lecture series focusing on issues regarding gender in society. He said lectures like hers help raise ethical questions well suited to various aspects of the UTD community.

“We’re not going to tell people what they should value,” Brown said. “What the lectures try to do, we hope, is to provoke people to think more clearly about what they value and how those values apply to what they’re looking at in different areas of science and technology.”

When looking for speakers on the topic of gender, Brown said she was one of the first speakers that came to mind. He said she is one of the most important voices in the current discussion of gender and video games

He also said that a big takeaway from the lecture for students was to find solutions to the shortcomings of developers showing equitable representation in video games.

Ryan Whorton, arts and technology senior, attended the lecture. He’s currently studying game development and said he’s deeply trying to learn how to be fairer in his work.

He also said that if student developers at UTD followed Sarkeesian’s solutions to the tropes, everything could change in the next two generations of games.

“I think that if I can just get one part of say, like the character design to go away – whether it’s the disproportionate breasts or butt physics, like if I could just get one thing fixed in my art, I would feel like at least I’d done a small part in making things better,” said Whorton.

10 ways to spend the snow days