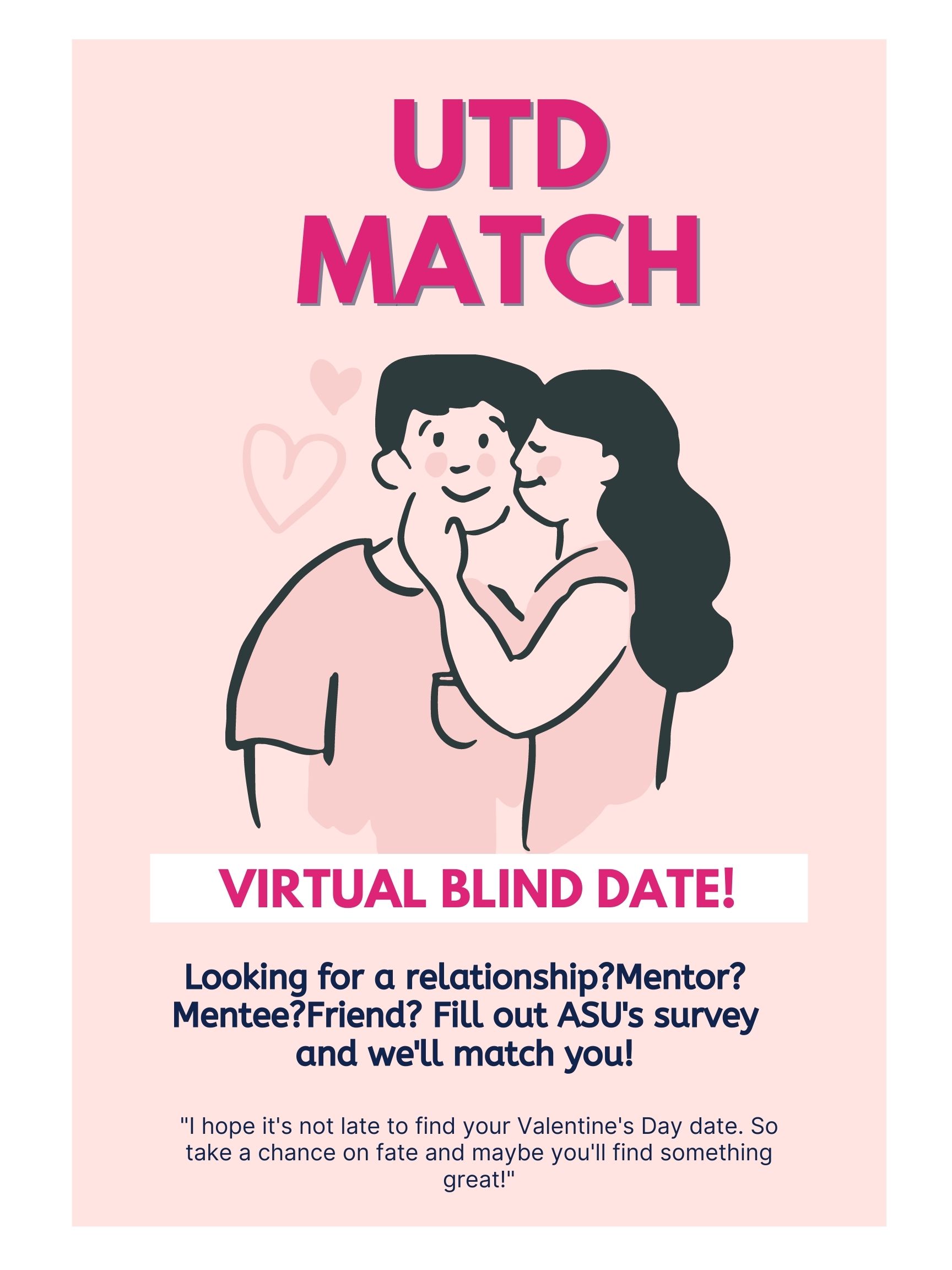 A Match organizer said that much of the reason for technical difficulties was due to the unanticipated numbers of participants, making it difficult to manage and organize for the team of three students in charge of the event. (Graphic courtesy of African Student Union).

In anticipation of possibly connecting with someone new, hundreds of students anxiously refreshed their emails awaiting the results of their UTD Match questionnaire.

The emails were sent out on Feb. 23, and matches were split into various categories including relationships, friends and mentors and mentees. Applicants received a WebEx link through email inviting them to join their respective group online where they would get the chance to meet their match for the first time, said African Student Union event coordinator and biology sophomore Uzoulu Obijiofor.

“We wanted it to be like you open up to a virtual blind date,” Obijiofor said. “No one would be able to look up each other’s names and whatnot prior to the meeting, so they wouldn’t ghost or judge them before meeting. We sent out 524 emails and split people up into breakout rooms with their matches.”

Healthcare studies sophomore Maame Saahene was one of the students who participated, receiving two matches under the friendship category. She attended the online meeting, but due to technical difficulties and unforeseen circumstances, she – along with some others – was unable to connect with her matches properly at first.

“There were some issues with the links,” Saahene said. “A lot of people didn’t get their links to work in time, and it was supposed to be like a 15-minute slot between each match. Some people missed their slots entirely, and the officers had some technical difficulties with breakout groups. The officers that were in charge ended up deciding to send out an email with our match’s information so we could reach out on our own.”

Despite the technical obstacles, Saahene reached out to one of her matches first and the second one emailed her. They exchanged Instagram handles and began speaking on there, and Saahene said she still talks back and forth with one of them and keeps up with them through social media.

“We were actually the same major,” Saahene said. “They’re a senior and I’m a sophomore. We’re kind of going into the same kind of career path, so it was just nice to be able to get to know someone who has more experience than me in something I want to go into. I wasn’t really expecting something huge, but definitely I think there’s a lot that can be learned from an older person, and somehow I got a mentor too.”

For others, like software engineering senior Tu Chu, the outcome was underwhelming. She had initially applied because she was a transfer student and looking to make friends. Chu said she was considering not attending the online meeting since the email notification with the link came only a day prior without any prolonged notice, and she didn’t think she’d be able to make it.

“I had a family event later, but I thought I should go because I didn’t want it to be awkward for my match,” Chu said. “There were already 40 people in the meeting, but they ended up telling me my match didn’t come. Some people were saying they gave out the wrong matches too, so my match could have been in the meeting accidentally paired with someone else.”

Obijiofor said much of the reason for technical difficulties were due to the unanticipated numbers of participants, which made it difficult to manage and organize for the team of three students in charge of the event.

“We were thinking like 30, maybe if we can get 50 people that would be great,” Obijiofor said. “We ended up having like 500; it was so stressful. It was six or seven hours every single day for a whole week working on it. But you also have to remember this is our first time doing it. We’re definitely doing this next semester, and it’s going to be in person and more organized.”

Improvements Obijiofor said she is considering include incorporation of artificial intelligence with help from other organizations. The intent is to help sort and match people using an algorithm, making the process go smoother and decreasing the manual labor involved. The plans for how to proceed are undeveloped as of yet.

“I’m still happy that we did this,” Obijiofor said. “A lot of people had mixed responses but overall, they’re saying they’re happy they had the opportunity to be a part of this. Now we know how to do it and what needs to be done, and we plan on improving it much more for next year.”