Overview of COVID transmission at UTD this past year 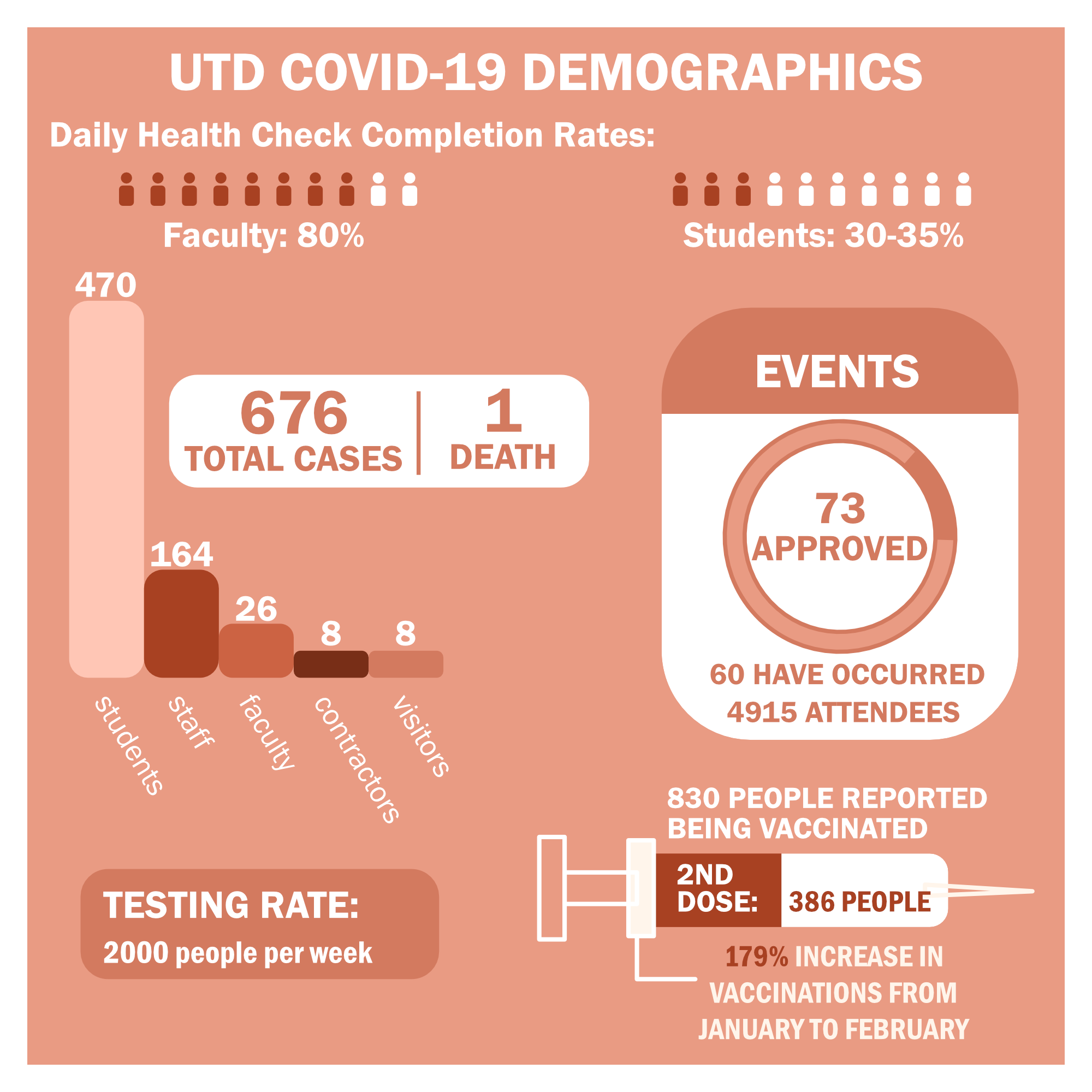 Since lockdowns began – and as of March 6, 2021 – there have been a total of 676 reported cases of COVID-19 and one virus-related death among UTD-affiliated individuals. Now, with on-campus cases currently in decline, the university continues to focus on testing and keeping track of vaccinated Comets.

Of the nearly 700 people who reported testing positive for COVID-19, 470 were students, 164 were staff, 20 were faculty and eight were visitors or others. Mariah Phipps, director of the Office of Emergency Management and Continuity Planning (OEMCP), said that cases have historically increased about 10-14 days after a break or holiday where people have been gathering together.

“We did see a spike in January and right before Thanksgiving,” Phipps said. “I think what kept numbers down on campus was the fact that we did not come back on campus at the end of the semester.”

Phipps said she has noticed a promising downward trend in on-campus cases in the past few weeks.

“Part of that may be attributed to the recent (winter weather) where people were forced to stay home, but we are also seeing a general decline in cases,” Phipps said. “We do have an increase in vaccine availability here in north Texas and in Texas in general, and I do think that is beginning to make an impact.”

So far, 830 people have self-reported vaccination against the coronavirus, and 386 have reported receiving their second dose if required.

Karlynda Poage, COVID-19 health screening and training program coordinator for UTD, said that one of the ways university administration keeps track of COVID-19 cases is through the Daily Health Checks that are emailed each day.

Angela Dees, UTD’s Emergency Management coordinator, said that the university has seen an increase in student health check responses with the introduction of event check-in QR codes. The event check-ins verify that students are completing Daily Health Checks before being allowed to participate in campus events, which are beginning to be approved by administration.

“We have had 60 approved events that have happened as of today (March 5, 2021), and 73 total events that have been approved,” Dees said. “There has been a total of 4,915 attendees for those 60 events, which include people who participated in drive-by and grab-and-go events.”

While the daily coronavirus notifications emailed out to the university community disclose the locations that individuals who tested positive have visited, cases that occur in common locations are not always linked to each other.

“While we have noticed that some locations tend to have more cases, those tend to be where people are just by the nature of why they are on campus,” Poage said. “We have not had any distinguishable hotspots where we are seeing transmission within the university.”

With the introduction of on-campus testing, Poage said, more cases may be attributed to testing locations – such as the Blackstone LaunchPad – but this does not mean that individuals contracted or transmitted COVID at those locations. Proactive testing was introduced on campus in October for select groups such as athletic organizations and was opened fully in January.

“We are currently testing about 2,000 people per week across the various testing sites,” Poage said. “That number continues to increase as more and more people take advantage of it.”

As the world passes its one-year anniversary with the coronavirus, Senior Director of UTD Media Relations Katherine Morales says the numbers are looking better.

“I think that the improvement can really be attributed to the measures that the university has put into place,” Morales said. “Wearing a mask, social distancing and completing the Daily Health Checks have really helped to keep the COVID numbers down.”

Beyond the CARES Act