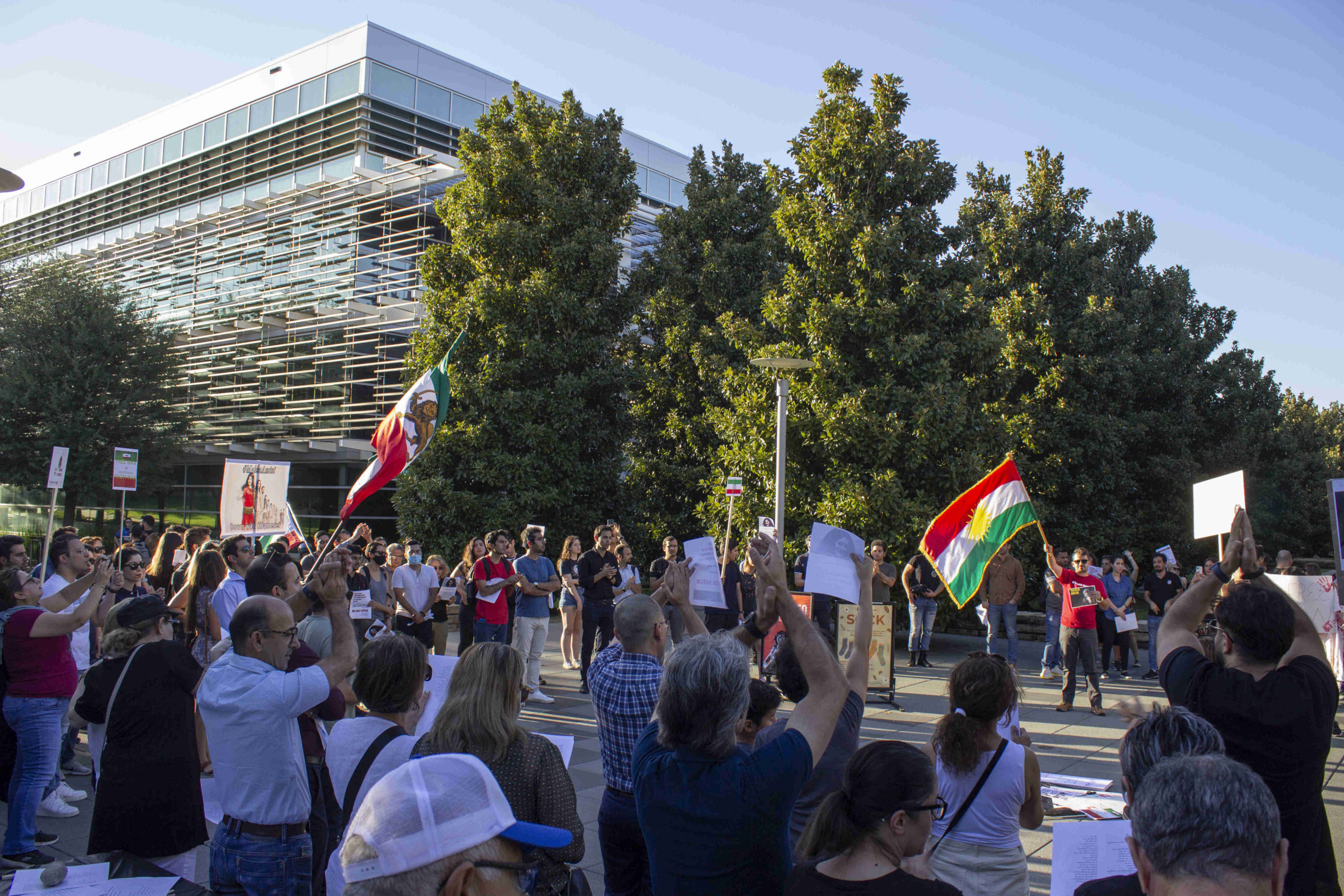 Students protested against the Irani government’s censorship and human rights abuse on Sept. 26 at Chess Plaza.

Approximately 180 protesters chanted “Say her name, Mahsa Amini” and “Zan, Zindagi, Azadi” which means, “Woman, Life, Freedom,” as part of the two-hour demonstration against assembly crackdowns in Iran. Visual and Performing Arts graduate student Shahrzad Hamzeh was part of a group of students and faculty from AHT that organized the protest after they heard about Mahsa Amini’s death, escalating protests and the subsequent internet lockdown.

“We need to show our support, but we are not there,” Shahrzad Hamzeh said. “We can’t fight beside them. What can we do that could help them? It’s to make people who are here in America, in a country where there is freedom of speech … be their voice. Maybe the superpowers of the world will do something about this, because the Islamic Republic is a threat to everybody.”

CNN reported on Sept. 25 that Amini, 22, was arrested in Tehran by Iran’s morality police for breaking the law by not covering her hair with a hijab properly. Upon her arrest, she was beaten and entered a coma for three days, after which she died in police custody on Sept. 16. As protests erupted across Iran, the country’s government responded by shutting down the internet on Sept. 19. Three days later, on Sept. 22, Reuters reported that Iran’s Revolutionary Guards would begin prosecuting anyone spreading false news about Amini’s death.

Finance graduate student Alireza Hamzeh said that Amini’s death unified the sentiments of various other protestors in Iran. Pensioners, teachers, truck drivers and others all had previous efforts toward political change, and Amini’s death and the crackdowns on freedom of speech pushed the country over the edge.

“There were a lot of different separate movements,” Alireza Hamzeh said. “Nobody has gotten what they wanted. So now, this time, we are all united … [Pointing to a flag] This is the emblem of the monarchy of Iran. A lot of people here do not believe in that. A lot of people believe we have to have a republic afterwards. But we are all united in the fact that this regime must go and we have to have freedom of speech.”

The protest featured a speech by Mitra Razavi, who grew up in Iran during the 1979 revolution. She was a college student when she was imprisoned in 1982 and was continuously beaten by interrogators until her release in 1991. Immigrating to America deepened her understanding of women’s rights and helped her continue her fight for women in Iran. Razavi believes that the movement has unlocked many years of concentrated anger and frustration.

“Today marks the 10th day of this movement, which started with mass death.” Razavi said. “I thought it would be crushed like the previous ones, but in spite of regime brutality, the movement for freedom and equality continues.”

Literature graduate student Bahareh Momeniabdolabadi, one of the organizers of the event, said thatThe Handmaid’s Tale, the novel written by Margaret Atwood, accurately describes the control that the Islamic Republic has over Iran.

“It seems this generation that is making that change in Iran was born in a different Iran, which is like Gilead,” Momeniabdolabadi said. “I was born after the Islamic Revolution, so I didn’t have any frame of reference … even suppression seems to be normalized to you after a while.”

Demonstrators cheered as several women cut their hair to show their solidarity with protesters and rebel against Iran’s enforcement of Islamic law.

“A lot of the protesters believe in hijab. But they do not believe in enforcing it because they see this as a threat to Islam,” Alirezah Hamzeh said. “Because they say if Islam is the religion of peace, it shouldn’t be enforced like this.”

While hijab laws are foreign to people in the U.S., their enforcement in Iran remains a constant form of oppression for many women. Shahrzad Hamzeh specifies that the act of wearing hijab is not itself the issue.

“We are chanting for the right to choose to wear hijab or not,” Shahrzad said. “We don’t have that anymore. It does not matter if you’re a Muslim, if you’re a Christian, if you’re Jewish, any religion you have, you are forced to wear hijab and that’s not right.”

Flyers at the demonstration advertised the Snowflake web extension, which helps Iranians circumvent the internet shutdown. Snowflake works by using the user’s Chrome or Firefox browser as a proxy for others to disguise their internet traffic. However, with the ongoing internet shutdown, VPNs and proxies can only do so much. Ultimately, people can’t use workarounds if there is no effective internet access at all. Shahrzad Hamzeh said this lack of communication access has left students worried about relatives back in Iran.

“Everybody here, we haven’t talked to our families in days because there’s no internet,” Shahrzad Hamzeh said. “Why should it be like that? Why shouldn’t they have a voice? Why shouldn’t people talk about what is happening inside of Iran? … So we’re giving hope to the people inside of Iran that we are here for you. Even though you don’t have internet, we will be your voice from outside of Iran.”

I hope your future articles are also fantastic, exciting, educational, and timely (aka F.E.E.T.)!