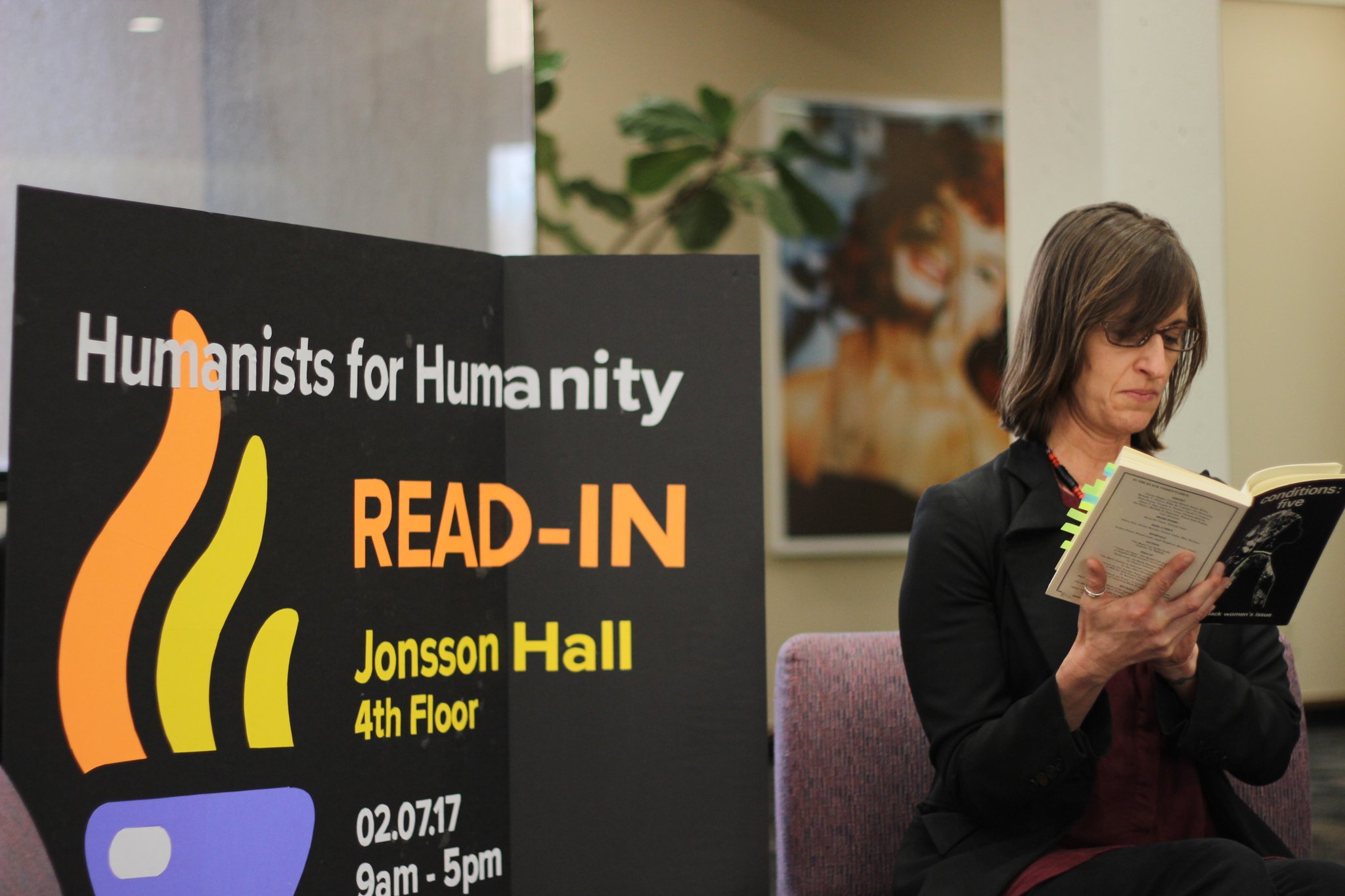 Faculty members and graduate students from the Arts and Humanities Department participated in a “read-in” on Feb. 7. From 9 a.m. to 5 p.m. to combat the ideas represented in the American Vanguard fliers posted on campus last week.

Professors and students read passages from works they had individually selected. On-looking students and faculty members were invited to sit down, listen and discuss.

Lora Burnett, an A&H lecturer, came up with the idea after white nationalist posters were found tacked on the walls of the Jonsson Academic Center.

“When I heard about the fliers posted around the university, it just seemed to me that we needed to do something that expressed a different message to people about what UTD stands for and what A&H wants people to get out of being in college,” she said. “We don’t want people to get a message of exclusion or fear.”

For Burnett, using literary works to convey a humanistic message was best for idealistic and practical reasons.

“It’s pretty natural for humanists to turn to books,” she said. “Turning to the texts we study every day and using them was just the best thing to do. (It’s) a kind of demonstration that is not intimidating to someone who has never done this before. (It’s) a very natural gesture … for us to sit in a circle and not have to come up with our own words. It’s visible and welcoming to students.”

However, Burnett said the event was not a protest, but rather a demonstration of inclusivity. Readers chose  varied passages. The morning started with feminist essays, transitioned into poetry and abolitionist papers and ended with political speeches.

Jessica De La Garza, a psychology freshman, said she was drawn to the demonstration in the morning.

“I think that all people innately have issues with the way certain things happen in our world. You have all kinds of rules and everything that says we are all equal, but in the hearts of people, we’re not,” she said.

Annelise Heinz, an assistant A&H professor, was one of the key organizers of the event.

“There is a strong sense of wanting to take action, to put our values that promote inclusivity and a free exchange of ideas into action,” she said. “There has been so much divisive and vitriolic national rhetoric. More than rhetoric, but legislative action that has had real consequences for members of our community.”

Heinz agreed with Burnett that using literary works to get a point across was effective.

“We as humanists have something to contribute to this conversation that is rooted in an understanding of historical perspective, of literary expression that stretches across regions, stretches across times to really draw on the wisdom of those who came before us,” she said. “One of the things that stood out was the sense that many of those ideas and sentiments still hold so much power and relevance even if they were written hundreds of years ago.”