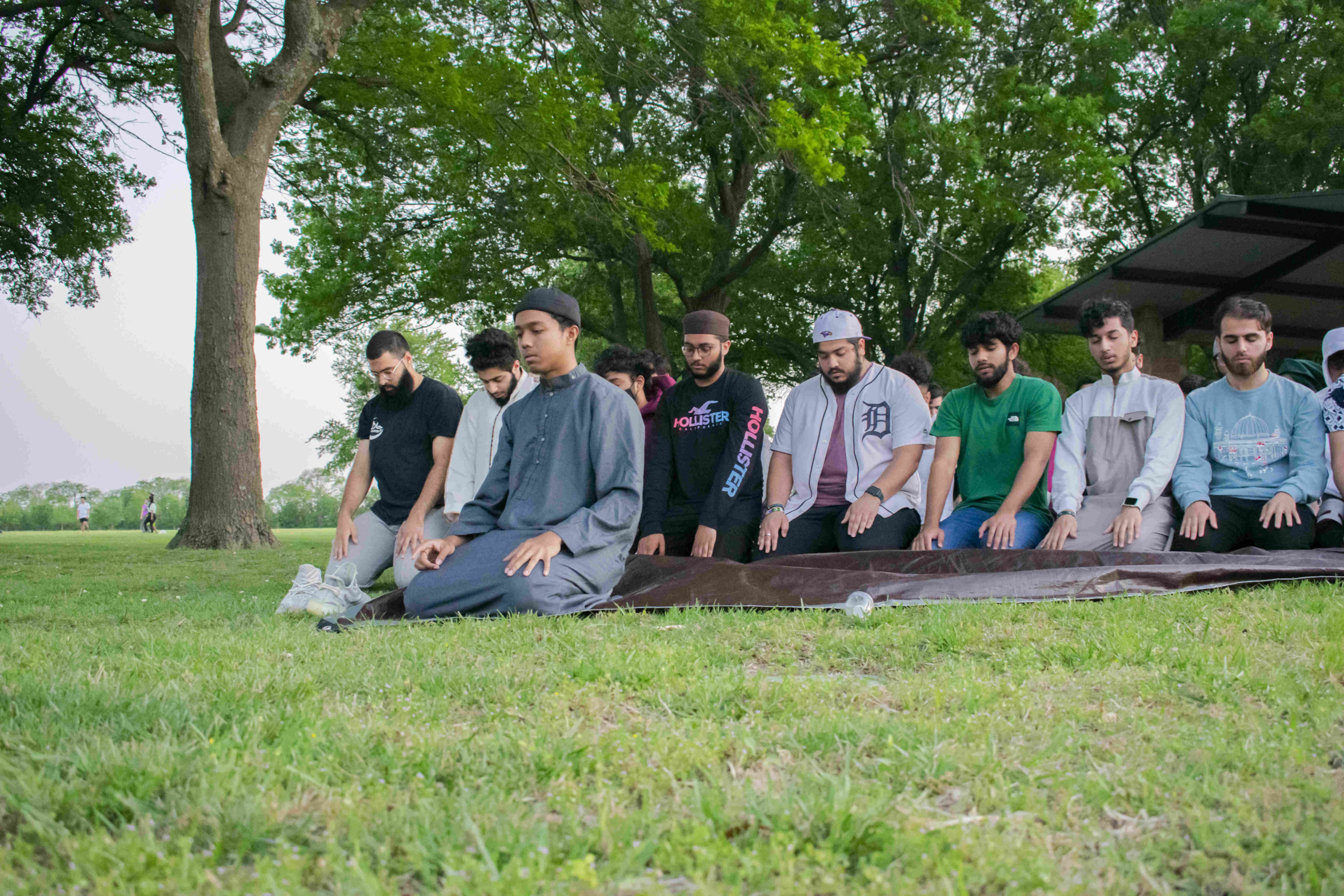 As the soulful call to prayer sounds, signifying sunset, healthcare freshman Siham Awel sinks her teeth into a chewy, sweet date—the first bite of sustenance she’s had in 16 hours.

Awel and a sizeable contingent of Muslim Comets abstain from eating and drinking from just before sunrise to just after sunset for 30 days during Ramadan. Ramadan, which shifts back by about a week and a half to two weeks every year to follow the lunar calendar, is fully during the school semester this year. During Ramadan, Muslims fast, read the Quran (Islamic scripture), pray special nightly prayers called tarawih and generally practice their best behavior to observe the month they believe the Quran was brought down to Prophet Muhammad (pbuh). The 30 days of Ramadan conclude with the full moon and a three-day celebration called Eid-al-Fitr, the largest Islamic celebration, which bears similar levels of importance to Easter for Christians.

“It’s one of the core pillars of Islam, so we should participate, [and] also it’s a time of year where I find myself able to reconnect with my faith,” Awel said. “Sometimes, more often than not, we kind of drift away from our faith, especially within the settings we live in and all the different worldly things around us. So, I like that Ramadan helps recenter us. My spirituality has given me willpower, so the fasting part is not challenging. And generally, fasting is not very hard after you’ve done it a few times and get used to it.”

“It’s been very interesting for me and a lot of student Muslims to say the least, because Ramadan is 100% within the spring semester this year and school is in-person. My sleep schedule is a bit chaotic, given the fact that we have to wake up before the crack of dawn for suhoor before I sleep again for my classes in a few hours, but it’s manageable…It’s a bit of extra work, but I’m not out of wack or anything, and it’s absolutely worth it,” Awel said.

Awel usually breaks her fast after a long day of classes with a date, a sweet nutritious fruit which Muslims are encouraged to begin iftar with in the Quran. The remainder of Awel’s iftar consists of ethnic foods such as samosas, light pastries and various curries she prepares with her family, but really Muslims can eat anything for iftar as long as it is halal, or “permissible” – a concept similar to “kosher” in Judaism. Among foods that aren’t halal are pork, alcohol and any sort of animal product in which the animal wasn’t slaughtered humanely.

Sarah Baig, CS senior and the event coordinator for the Muslim Student Association on campus, says halal foods are offered at MSA’s Iftar Dining Service. Partnered with EPIC Masjid, Muslim students can grab a hot box of food from EPIC’s daily iftar feasts in Dining Hall West thirty minutes to an hour after iftar. Meals through this service are free for those on a meal plan and come with a fee for those that aren’t. Additionally, students can register to attend iftar at EPIC Masjid if they want to pray tarawih at the mosque after they eat.

“We want to try and accommodate all of the Muslim students that live on campus. I live on campus myself and I know how hard it can be living alone during Ramadan. When you’re already tired after classes, it’s hard to cook for yourself and some people don’t have cars to get food. So, our plan was to bring the food to students, to a location that’s accessible…and easy for them to benefit from” Baig said.

MSA provides a plethora of other programs to help Muslims students feel connected to their faith this Ramadan. Included are weekly male and female Quran circles, religious workshops, culturally-themed iftar gatherings and speaker panels, among many other events advertised on MSA’s Instagram, @msautdallas.

“Ramadan is about building that feeling of community. It’s a month you want to interact with people, especially this year since last year we were all isolated and virtual. [So,] we’re trying to facilitate that environment of community…,” Baig said. “Something people might not know is that you can still fast during Ramadan even if you’re not Muslim to show support for your friends. So, you know, while a lot of our educational programming is to help Muslims strengthen their faith, non-Muslims are also welcome to come and learn new things about Islam and their peers.”

In addition to student groups like MSA, the University itself has several accommodations Muslim students can make use of to practice their faith. The Reflection Rooms on the bottom floor of the Student Union serve as a designated praying space with separate male and female praying areas. This room is open as long as the SU is open, which covers the time for at least four of the five daily prayers Muslims must complete. The SU also has foot wash stations in both the male and female SU bathrooms nearby for students to perform “wudu,” a cleaning ritual that includes washing the feet before prayer. Lastly, as for all religions, Muslim students can request accommodations from their professors for Ramadan or Eid following instructions in their undergraduate or graduate school.

“I want to say that Ramadan is [in] no way a burden to me or any other Muslims,” Awel said. “It’s something we partake in voluntarily and it’s really a beautiful month where we all find ourselves getting closer to our religion and finding ourselves more charitable and trying to be kinder to one another and just trying to better ourselves as people. Hopefully, people are able to see those aspects of Ramadan and not just the fact that we’re not eating or drinking.”