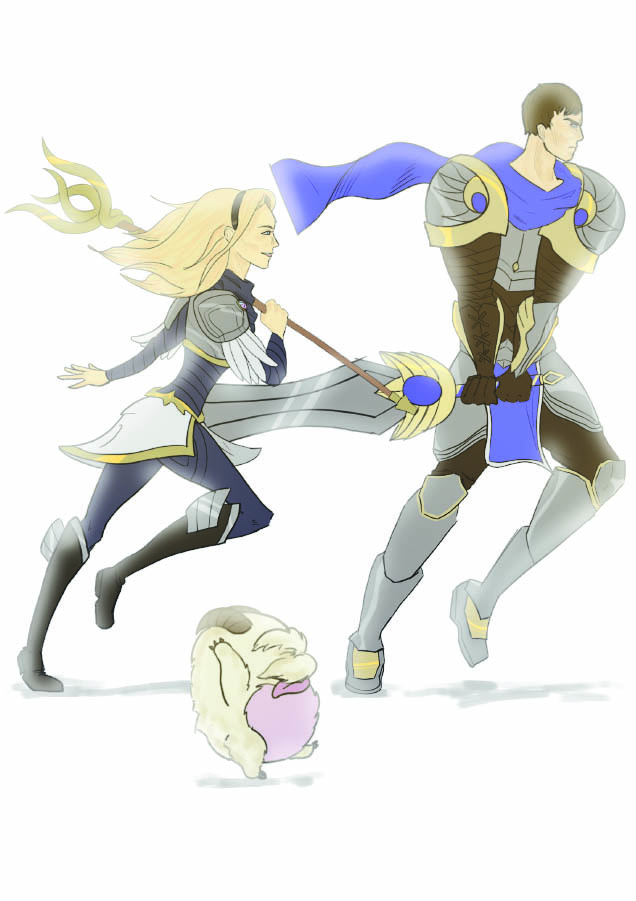 Riot Games is finally evolving from Riot Game and creating a game besides “League of Legends.” They announced two new projects, one of which is the recently released “Legends of Runeterra.” Riot Games representatives said that they want to make a card game that improves upon others on the market, so how does “Legends of Runeterra” stack up to games like “Hearthstone” and “Magic: The Gathering?”

“Legends of Runeterra” is a new digital card game created by Riot Games, revealed alongside “Project A” during “League of Legends’” 10-year anniversary celebration last year. Its mechanics play out similarly to an altered hybrid of both “Hearthstone” and “Magic: The Gathering,” and while it’s currently in a beta state, anyone can play it right now. It’s free to play with in-game purchases, but the monetization is unique in several ways, which is tied to the game’s unique progression system.

But how does it play? It combines “Hearthstone’s” mechanics of card health staying constant and max mana increasing on each turn, with Magic’s mechanics of choosing blockers against attackers, mixed with Riot’s new mechanics. Unique to “Legends of Runeterra” include the attack token, Champion level-ups, and the lack of true phases.

In “Legends of Runeterra,” the game progresses round by round. Each round, one player gets the attack token, meaning that they go first and can declare an attack on the enemy’s nexus. Turns go back and forth during a round, and players can summon units or cast spells during their turn, once per turn. After an attack is declared, the defending player can choose cards to block, and once the round ends, the attack token goes to the other player. There isn’t a battle phase that happens at a specific time, as the attack happens on whatever turn it is declared, and all cards can be played before and after the attack, if the player has enough mana. When either player’s nexus (representation of their health) is destroyed, the game ends, averaging about 20 minutes for each game.

Champions are unique cards that come with level-up conditions and unique abilities, which become central to how a deck is built and played. For example, a player can build a deck around Yasuo, whose level up condition is focused around stunning and recalling enemies, by putting as many cards that stun and recall into the deck as is viable. Stun or recall enough enemies, and Yasuo levels up, gaining health and attack as well as empowering his ability. This allows him to attack any enemy when they are stunned or recalled, giving him free attacks. Every champion in the game has their own level conditions and abilities, creating multiple viable decks and win conditions, which is impressive since “Legends of Runeterra” doesn’t have as many card sets as its competitors. This is one of my favorite aspects of the game, since it also gives you enough free cards to start experimenting with most of the champions in the game from the very start.

Compared to other card games, both digital and physical, cards are more easily obtained without buying booster packs. In fact, it is literally impossible to buy booster packs: the only monetization gameplay-wise is directly buying cards. And not only is gambling essentially removed from the equation, there’s a limited stock of cards players can buy at one time, reducing the pay-to-win aspect of a game where owning the right cards for a meta deck can be all that’s necessary to win. The fastest way to earn cards is legitimately playing the game, which can only take about four hours to be able to choose common and rare cards. Players can choose a region, which is a playstyle for a deck, to earn cards for, and can change that region at any time, meaning that with dedicated playtime, a player can earn more cards than they can buy.

While the capsules players earn by playing are functionally booster packs, they will always contain cards for the region the player has selected, and duplicates convert to currency that can be used to create cards if not enough wildcards are earned. It’s easy for players to create a deck that they want to play given about three hours of playtime. Not only is the progression system friendly for players’ wallets, it also is much more rewarding than random booster packs or loot boxes, because it gives milestones to work towards. It works as a positive feedback loop: playing more gets more cards that players want, which lets players try out new decks and strategies, incentivizing more play.

While I might be biased as a “League of Legends” player, “Legends of Runeterra” offers plenty to card game players, from an interesting gameplay loop that allows for great outplays, to a player-friendly monetization system that gives creative freedom to players wanting to craft their perfect deck. Even though it is likely the meta will be solved quickly in the beginning with its lack of cards compared to older card games, with Riot’s support, “Legends of Runeterra” can evolve into an even greater experience. As it stands right now, “Legends of Runeterra” is a great digital card game to compete with “Hearthstone” and either play a casual game or competitive binge. While a meta will most likely settle in by the time this article publishes, there’s no reason to not hop in and experiment with decks in Riot’s new card game experience.