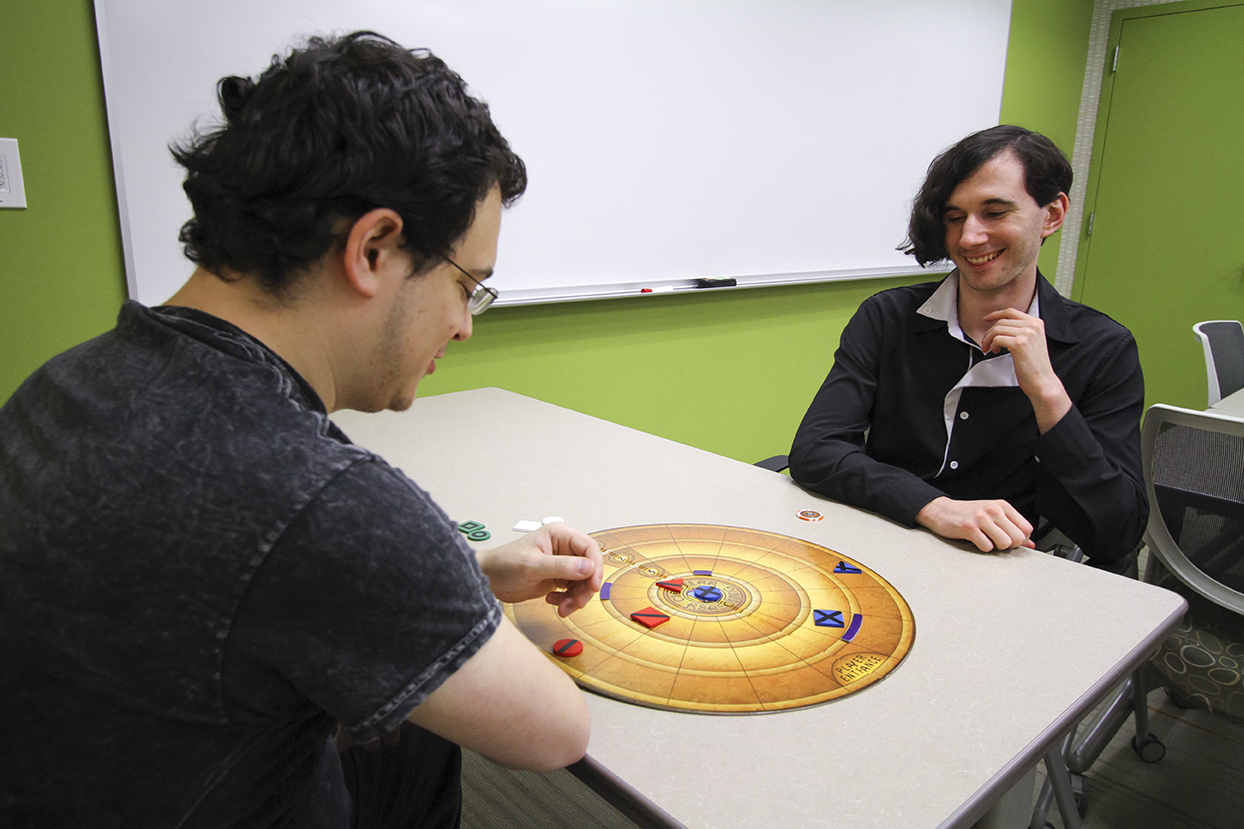 A new board game with origins on campus may soon be available on store shelves across the country.

ATEC junior Tomer Braff and senior Edward Stevenson created the chess-like board game Circular Reasoning in a game design class on campus. In 2014, after submitting their work to IndieCade, which is like the Sundance Festival for independent games, the company AdMagic decided to pick up the game for publishing.

Braff came up with the original idea for the game in the class. Stevenson joined the project late, but said he instituted changes to streamline and simplify the gameplay.

“I came along and tweaked and balanced a lot of things,” Stevenson said. “There were a few mechanics that didn’t exist until after I joined.”

After the class responded positively to Circular Reasoning, Braff said he decided to take it to the professional world.

“I asked all the rest of the group members, ‘Hey, I’m going to try to go as far as I can with it. If you want to join me, sign this paper,’” he said. “(Stevenson) was the only one who signed with me.”

Braff said the professor of the course, Steven Billingslea, encouraged the two ATEC majors to enter in the IndieCade competition.

“He was a really good help with this,” he said. “I kind of want to stress (this), because I really appreciate the help that he’s given us.”

Three or four months after submitting Circular Reasoning for judging, Braff received an email announcing their acceptance to IndieCade.

“(We thought) is this real?” Stevenson said.

Shortly after, the two-man design team made their way to Culver City, Calif. to attend the exhibition.

“We met some really cool people there … including AdMagic, who eventually published us,” Stevenson said. “We sent them (a copy of the prototype) and the CEO played it with her daughter or something and was like, ‘I love it.’”

AdMagic was looking into publishing their own line of games, instead of just being a third-party manufacturer for products used in games, such as  the cards for Cards Against Humanity and Exploding Kittens. They wanted Circular Reasoning to be one of the first in that new line.

Although AdMagic took over the manufacturing, distribution and production costs, the company stayed in contact with Braff and Stevenson to get their opinions on the design of the board, pieces and box.

“(When) someone gives you an offer to just basically give you money for publishing your game at no effort or cost to you, you don’t say no to that,” Stevenson said.

While the publishers are currently pushing for retail distribution right now, purchasers can find Circular Reasoning on Amazon.

To promote the board game, Braff and Stevenson have gone to several conventions. The team went to PAX South — the penny arcade expo — twice over the past two years.

“It’s actually a lot of fun,” Stevenson said. “Since we don’t actually have to be there, as it turns out, because they have employees there manning the booth … (we) go off and do convention things for a while.”

Going forward, the two students are both hoping to continue to create different types of games with their ATEC degrees.

“The most relevant thing right now for me is I’ve been working on a mobile game,” Braff said. “It’s a kind of dodger-kind of game. It’s called Dot Matrix Dodger.”

This year, Braff submitted his new gaming app to IndieCade to start to make a dent in his long list of goals.