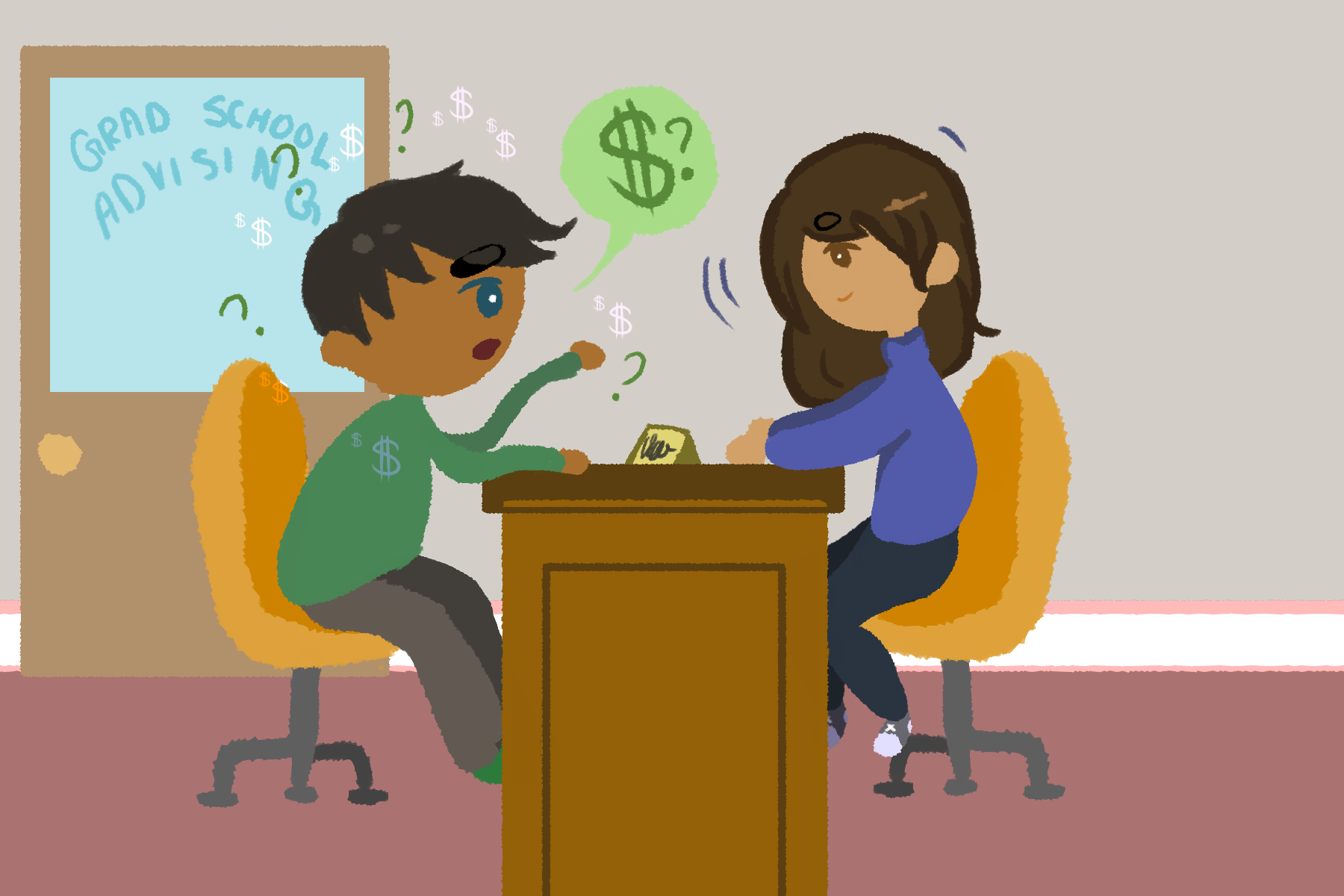 According to Pew Research Center, a third of adults have student loan debt. While this typically ends after graduating college, some students find an even bigger challenge afterwards: financing graduate school.

Beyond paying for application and exam fees, tuition rates for graduate school can cost between $20-60k per year. Student loan debt can be an issue for students, and according to the Association of American Medical Colleges, 73% of 2019 medical school graduates reported having student loan debt. Director of Health Professions Advising Center Doyen Rainey said it isn’t unheard of to come out of medical school with $200-250,000 in loan debt, but people typically don’t see it as a problem because they pay it off once they become a doctor.

“People are kind of laser-focused on getting into medical school, and then figure ‘I’ll cross the bridge of paying for it later.’ I mean, you wouldn’t think it would work out okay. But it actually does work out,” Rainey said. “There are many ways to pay for medical schools and the medical schools themselves have financial aid departments that are interested in helping students to connect with funding. Obviously, the school wants to get paid, so the schools themselves are very helpful in helping students to figure out ways to pay for their education.”

For aspiring law students, the path looks a little different. Pre-law advisor Barbara Kirby said financing law school is one of the first concerns discussed with pre-law students. Some of the most common ways to pay for law school consist of taking out loans, and even these come in different forms: basic graduate school loans – where a student can borrow up to $20k a year – graduate loan plus and borrowing from a private bank, which can often involve higher interest rates and no loan forgiveness.

Pre-law students often take a gap year to pursue other interests or work to save money to pay their tuition. During the first year of law school, Kirby said, students are often discouraged or even barred from working.

However, some students can’t take out loans for religious reasons or because interest rates are too high. In Islam, for example, charging or paying interest – known as “riba” – is considered forbidden and can prevent students from pursuing graduate degrees. Kirby said that law schools often work with students to make the financial aid interest free somehow, but ultimately the responsibility falls on students to generate funds themselves if they are unable to arrange it with the school.

Rainey said there are several other ways to finance graduate school aside from taking out loans – although it’s the most common way to do so. While scholarships in medical school are rare, students can often pursue programs where – in exchange for their services as a doctor in the military – their tuition will be paid.

“Sometimes there are community resources, where members of the community have pooled their money to send somebody to medical school,” Rainey said. “It amounts to a loan, kind of, but it’s not alone with interest. Your name isn’t necessarily on a contract. What you’re essentially doing is paying back the members of your community later.”

Among the multiple ways to pay for school, there exists the unconventional. During his free time at UTD, political science alumnus Shahin Zangeneh studied and invested in stocks through day trading, which is one of the ways he paid for his undergraduate education in addition to working as a translator part-time.

“I was using most of my free time learning first how to do it, then I used the residuals from my previous job,” Zangeneh said. “It’s tough to say that it’s easy for everyone because you need some initial capital.”

He said he hopes to continue investing in stocks when he attends law school – as well as take out loans to defray the costs – but said it might not be profitable to do so while balancing being a student.

“I don’t know how busy I’ll be during grad school and my method is kind of time-intensive, so I would wait to see until I got to grad school,” Zangeneh said. “I would do the same thing in grad school if I had the free time but I would emphasize my own studies before anything. Ideally, I’ll take my income, whatever savings I managed to maintain (hopefully a lot), I’ll put it into an index fund and let it sit and then day trade whatever amount of money that I’d be comfortable with at the time.”

Kirby said making good grades during undergrad, as well as planning out a timeline for taking the required graduate school exams, is paramount. She said financial assistance in most graduate programs depends on GPA and test scores.

“You don’t want to be in a position where you’re thinking about these things at the last minute – to get to the end of your junior year and suddenly be thinking about ‘How do I afford all of these things?’” Kirby said. “You want to be thinking about every aspect of graduate school admission as you go along so that your timeline puts you in the best position to get the numbers that you need, and you’ve done the research about what schools will fit with your profile.”

Note: The opinions expressed above are for general informational purposes only and are not intended to provide specific financial advice.*

Academic dishonesty in a virtual world