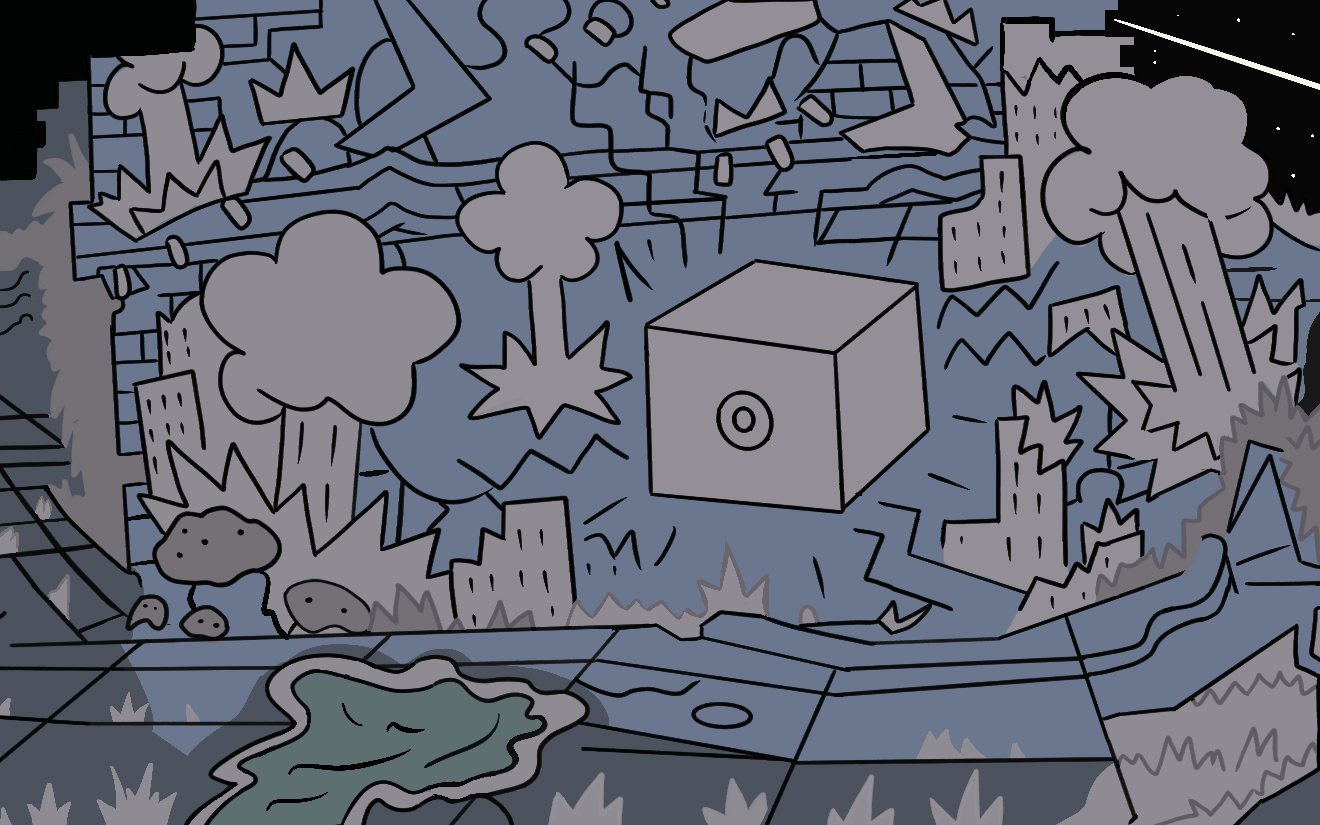 “Homunculus”by Joe Sparrow is a deceptively simple, tearjerking, page-turner of a comic about a scientist who unknowingly builds an AI towards the end of the world. It follows her 513-year story as she tries to meet the expectations of the world around her and is illustrated with a pastel color palette, friendly line art and funny-looking humans without noses.

Now, what sets this comic apart from other stories about artificial intelligence is the way Sparrow presents the AI character, Daisy, in “Homunculus”. Instead of being an omniscient being from the beginning of time or a single-minded, task-oriented machine, Daisy is instead written as having the fresh perspective of a child. This creates an atmosphere of unbridledwonder and innocent excitement that soon turns to foreboding calamity after Daisy is presented to the head of the institute by the scientist that created her. The decision to imbue Daisy with a child-like perspective is narrative genius. For one, it leads the reader to view the pointlessness and unnecessary heartbreak nuclear war from an apolitical perspective. But perhaps more importantly, as it is used in this medium, it makes small details that feel odd at first catch your attention.

Daisy’s childlike perspective is explored narratively and visually through seemingly simple decisions by the author. For instance, instead of giving Daisy a mobile body like that of a stereotypical robot that turns evil and goes rogue, she is instead a giant cube that is placed on a platform – rendering her immobile, confined to the room she’s in. Therefore, the only way for her to learn new things or interact with other living beings is by having someone be inside the same room she’s placed in. It’s as if Daisy is a kid who’s been placed in their crib or in a classroom, waiting for an adult to come in and supervise, teach or otherwise spend time with them.

In that vein, the scientist that built Daisy, Veronica, is very much coded as the teacher or maternal figure in Daisy’s life. Unlike other AI stories where the scientist is coded as an authoritarian figure, Veronica clearly cares for Daisy, and shows her affection through various small acts. The characterization of Veronica as a caring figure is important not only because it complements Daisy’s child-like innocence, but also because it shows how even towards the end of the world, kindness can still exist. This point is emphasized from the very start of the comic. When Daisy is being activated, for example, Veronica nervously but cheerfully introduces herself to Daisy and explains to the AI what she is. Then, one of the first things she does with Daisy is teach her simple math problems and how to say the letters of the alphabet. When it comes time to present Daisy to the head of the institute that makes the funding decisions. Daisy is initially nervous about him not liking her and worried about what would happen if he decided to cut Veronica’s funding. But Veronica just smiles confidently and encouragingly says “I have complete confidence in you. Just be your usual, charming self. You’ll do fine.”

Lastly, there is also the final scene that Daisy and Veronica share, where she visits Daisy one more time. Veronica tearfully explains to her what is going on, gives her one last request so Daisy’s brain doesn’t deteriorate and can stay active and tells her she loves her before leaving for a safe shelter. This relationship doesn’t just impact Daisy, though – Sparrow shows how the last request given by Veronica is faithfully followed by Daisy up until she is found by the descendants of humans that managed to survive the nuclear apocalypse. Then, when asked what her first memory was about the world before the war, Daisy says “I remember…light. Light…and then…her face,” in reference to Veronica.

As heartwarming as “Homunculus”starts with this dynamic of innocent new life and caring parental figure that Daisy and Veronica have, this story does take place towards the end of the world Things take a quick turn after Daisy is presented to the head of the institute. There were hints of this tragedy throughout the story, but they were always dampened by Veronica’s optimism. However, the reader can never quite brush them aside, since she felt that it was important for Daisy to have an idea of the world outside, both good and bad. But because Sparrow chooses to draw the entire comic with singular viewpoint panels-in other words, first-person perspective- the reader is presented with a limited viewpoint from the start.

This artistic choice of panel design is what makes “Homunculus” deceptively simple. One, this perspective makes for a concise way of visual storytelling that says a lot with a little and helps concentrate complex emotions and thoughts into concise bursts. Two, it gives the reader a feeling of both powerlessness and curiosity: we know something is going on, but don’t know what exactly it is. With a limited range of visibility, both Daisy and the audience can only piece together what’s happening and when it’s happening through changes in lighting, scenery, or someone walking by the range of sight the author has given us. Another minor, yet strategic, detail that goes well with this feeling of half-knowledge is the way the comic starts off every new scene with a sentence, conversation, or scene already halfway through. This detail also helps the pacing, keeping the 513 year period from feeling too sluggish.

So, after one unknowing farewell said, nuclear war breaks out, and we are left with Daisy waiting for Veronica – or anyone, really – to come back for her. Through this passage of time that we take with Daisy we see how the world changes around her and how, eventually, Daisy is rediscovered by the descendants of the surviving humans.

As mentioned before, this comic is a both visually and narratively simple one, but it says a lot with a little. Through the surprisingly maternal relationship between an AI and a scientist with good intentions, we get a story about life that isn’t jagged, but remains poignant and thought provoking. If you’re looking to feel something again, “Homunculus” by Joe Sparrow is the comic for you.