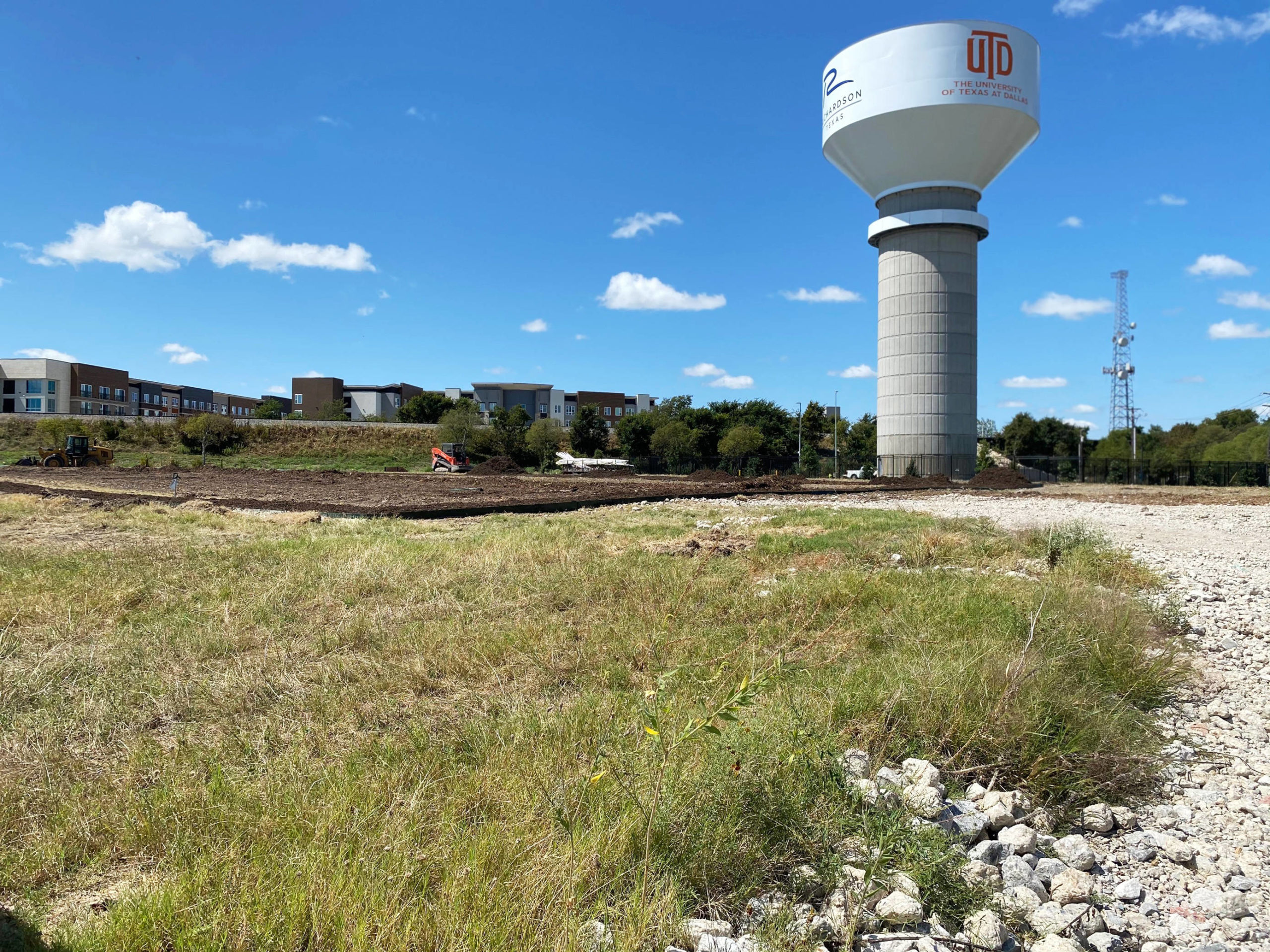 The Eco Hub—a 20,000 square foot student farm that will provide produce for food-insecure communities—is intended to beautify the area around the new water tower and provide more opportunities for Comets to get involved in campus sustainability.

Partially inspired by the micro farm that UT Austin operates, the Eco Hub will be a student-led gathering space located on Synergy Park Boulevard to grow food, discuss environmental issues and explore how sustainability and education converge, Sustainability Director Gary Cocke said. Harvests from the farm will be donated to the Comet Cupboard, with any excess produce going to the North Texas Food Bank. The team is hoping to break ground on the farm on Oct. 16, which is World Food Day.

“I expect that the Eco Hub will be a hub for students that value sustainability,” Cocke said. “We will have the students educating about food insecurity, climate justice – all these topics that are rolled up within the topic of sustainability – and give students an area where they can come together and discuss the ideas that they care about.”

Geosciences senior Caroline Lonneman, an Eco Rep who serves as the student assistant director for the farm, said that the team is recruiting a cohort of student volunteers to manage the operations of the farm and plan new projects. Each student will be responsible for the care of a plant family, from selecting which plants to grow all the way to harvest. On designated community service days, such as when plants are ready to be harvested, other members of the UTD community will be able to volunteer.

“We also hope that we can get some other groups on campus involved, even if not with the gardening part,” Lonneman said. “It’s a great way to get more people involved, and we do see this as being a long-term project.”

The Eco Hub will include about half an acre of soil, a supply shed, a new apiary, picnic tables and green space. Cocke said that the new apiary is one of the unique value propositions that the farm will bring to the student volunteers. When it’s established, they’ll have the first opportunity to learn beekeeping, maintain the hives, and harvest and sell honey to support sustainability projects.

Cocke said that the farm has already generated significant interest. He’s had conversations with faculty who want to grow plants for natural dyes to be used in art installations, and the Chemistry Graduate Student Association is interested in repurposing single-use plastics into a construction material at the site.

“Having this facility where we can do these outside-of-the-box type of projects is something that I’m really excited about,” Cocke said. “As a sustainability educator, I think that anytime you can get your hands on what you’re interested in, it makes a difference.”

Cocke said that while plans for the Eco Hub developed rapidly over the summer, its foundation has been in place for over a decade since the large-scale UTD composting program began.

Greenhouse Landscape Coordinator Craig Lewis, affectionately known as Compost Craig, started composting on campus in 1991. For 15 years, it was a small program that was mostly used for new flower beds on campus. Then in 2006, he was asked to turn the site on Synergy Park Boulevard into a composting site to use in the JSOM II landscaping for LEED certification points. In just one year, the site produced 150 tons of compost – all with material from the UTD campus.

“We started collecting only debris from UT Dallas – trees, landscaping materials like flowers that were done for the season … food from the food courts, from all dining services,” Lewis said. “We had no outside sourcing because we knew what we were putting into the mix.”

Lewis managed the area until 2016 when the program was shut down to make way for the water tower that was built in 2020. Seeing a need to beautify the area after construction finished, Cocke proposed the student farm idea. The remaining compost at the site has been leveled and the area is being prepared for planting. While the team hasn’t yet decided what will be planted, they do plan on growing some fall and winter crops this year.

“We’re working with a piece of land that hasn’t seen any sort of development or management in years,” Lonneman said. “A lot of this first year is going to be preparing the soil, planting things that maybe we can’t harvest, but that will make the next year’s better. Because, you know, the whole point of this is sustainability.”

In addition to learning how to grow food, the team hopes that the Eco Hub will become a place for students to learn about the environmental, social and economic dimensions of sustainability, Cocke said.

“Food insecurity itself, it has an environmental dimension, so [they’re learning about] access to healthy local, organic foods, [and] what are the contexts in which food deserts exist? What are the communities associated with those? What are the economic factors that contribute to food insecurity?” Cocke said. “By the simple act of having a student farm that is providing support to food-insecure communities, I think we’ll be able to get at much deeper issues and I really can’t wait to see where this goes.”

Curious Comets: What happened to V-Bikes?