Students may feel more comfortable eating at UTD’s Dining Hall now that its health rating is two points away from “excellent.”

The hall received a “good” rating of 88 out of 100 after the most recent health inspection conducted by the Richardson Health Department in May, according to the department’s website. An “excellent” score begins at 90.

May’s score is two points lower than the previous October 2010 score of 90. It is also 12 points higher than the “acceptable” 76 score the Dining Hall received December 2009.

Robert Agee, director of Dining Services, said the health inspection tests operation standards such as keeping food at least six feet above the ground, and correctly labeling food containers and ensuring the sinks and lights are in order.

Agee added that the hall did not receive a perfect score in May 2011 because one of eight hand sinks was out of order, a label was missing on a condiment dispenser, the ice machine needed plumbing repair, condiments were not under a sneeze guard supporting the salad area and three floor drains needed cleaning.

While Agee said his goal is to receive a perfect score come October 2011’s inspection, it is easier said than done in the large and busy dining hall.

“We always want to score 100 but some facilities are more likely to get it than others,” he said. “For example, it is not as complex to receive a perfect score in the Coffee Corner that serves 100 customers per day as it is in the (Dining Hall and Comet Cafe) which serve about 3,000 customers per day.”

Agee was Director of Dining Services only during May’s rating. He did not comment on the ratings the hall received October 2010 and December 2009 as he was not at UTD at the time. 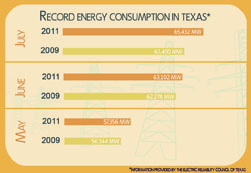