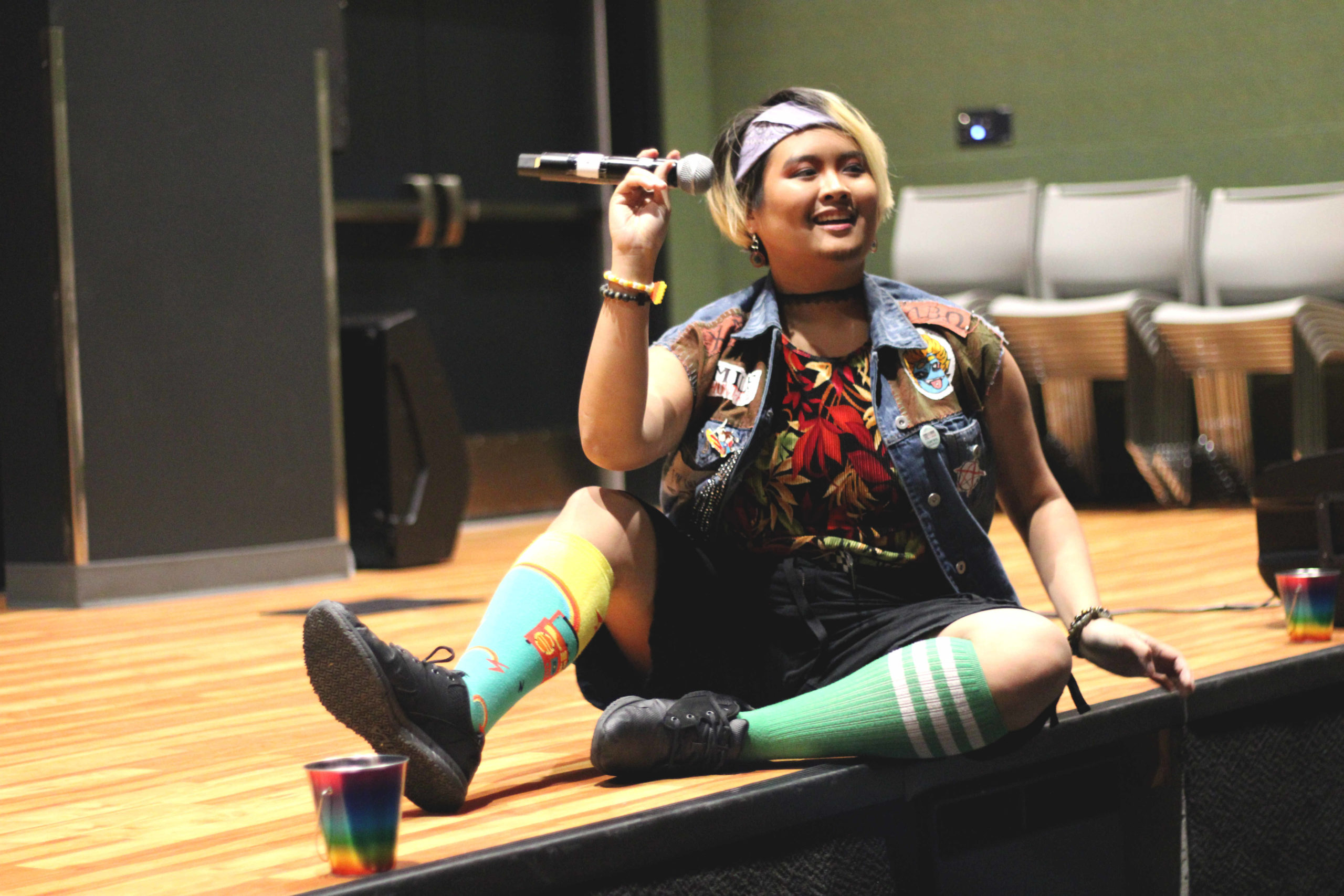 Featured performers from the gender-inclusive Greek organization spoke with The Mercury about their experience planning and putting on an in-person show in these chaotic times, as well as what drag – an art form exploring the performative nature of gender presentation – meant to them personally. Psychology senior Beck Da Jose, performing as Sin Diesel, said that different drag personas were like different panels in a stained glass window, all forming one work of art.

“There’s a shining light that you are,” Da Jose said. “Who I am normally and who I am in the drag show… they are all extensions of me, they’re just played up in different ways.”

XAI members develop their own characters, building personas from an understanding of who they are and how they want to present on stage. The performers spoke out against misconceptions people tend to have about drag—it isn’t just for cis men, for instance, who identify with the gender they were assigned at birth.

“Historically and accurately speaking, it’s very trans-dominated, there’s a lot of people of color – but unfortunately the media focuses on the pretty, cis men acting catty that they can market… drag is an art form, and people should be more respectful of it,” biology senior Alex Xavier said. “It’s a queer celebration.” They emphasized the openness of drag to anyone who wants to perform- personas need not even disagree with the performer’s offstage gender identity.

For mechanical engineering senior and XAI President Natasha Rahman, her character Delta was an extension of her own masculinity. There isn’t a codified set of rules to follow for drag identity. Rahman put an emphasis on drag’s lack of boundaries and restrictions.

“Obviously gender is like, whatever, but as someone who doesn’t identify as a man, masculinity doesn’t technically come naturally to me. In drag, you get to be what you want. In drag, it is natural: you just do as you want, as confident as you want,” Rahman said. “You get to define those rules and make it up as you go. There’s no pressure.”

The two nights of shows featured energetic lip-synching, vocal performances, dancing, costume changes and pantomime. The finale’s rendition of Rina Sawayama’s “Chosen Family” was particularly emotional—especially for students who consider XAI their own found family. The pandemic has been a difficult time for many queer youths, with extended lockdowns bringing an entirely new level of claustrophobia to closeted individuals. For Xavier, it was a motivating force: she had thought about performing before, but it was quarantine that convinced her to overcome anxiety, seize the opportunity and end her senior year on a strong note.

“The whole experience was very much needed after a year and a half of nothingness,” Xavier said.

Covid-19 certainly kept the diaternity on its toes while planning. Between changing SOC regulations and previous organizers graduating, XAI members had to come together in a big way to get everything ready—and they did, teaming up to sew costumes, offering rides to doctors’ appointments, rapid-testing performers before each performance and organizing socially distanced seating within the venue.

“Even during a global pandemic, I know I have those siblings that I can rely on and not feel the weight of the world over,” Rahman said.

Despite pandemic difficulties, the diaternity remained committed to service through the performance. This year’s show raised funds for the House of Rebirth, a housing initiative and community safe space led by and for Black trans women in the Dallas area. A quarter of the show’s $2,500 proceeds went to support the House. When they realized XAI’s annual finances were in better shape than expected, members chose to donate another 25% to the Native American Rights Fund, a legal organization defending the rights of indigenous peoples.

That dedication to community building continues on-campus with events such as this semester’s upcoming ReProm, where students have another chance at a school dance with their desired gender presentation. Programming like the drag show and ReProm are supported by the Galerstein Gender Center.. The show’s pride flags were bought by the Center, which can now rent them out to any requesting student organization.

“UTDallas being the number one LGBTQ-friendly university in the state of Texas means something very practical when it comes to the lives of students that come here and get connected,” political science senior and XAI Secretary Ryan Short said. “I’m very happy that Chi Alpha Iota gets to be a part of that.”

The show itself has already made a strong impression on audience members, exploring not only gender but also cultural identity. Rahman explained their experience performing and hearing from other students about their onstage persona, Delta.

“There’s this song that me and another drag performer perform to, who are both South Asian, a very Bollywood song (‘Zoobi Doobi’, from the film 3 Idiots) and people came up to us after, like: ‘oh my God, the second that song started playing I was losing my mind, I can’t believe I would be able to see this in a drag show…’” they said. “And for a culture I’ve grown up not finding myself in, at least not the queer part of myself, being able to use drag to make a home for that side of me and combine those aspects is amazing and so fulfilling.”