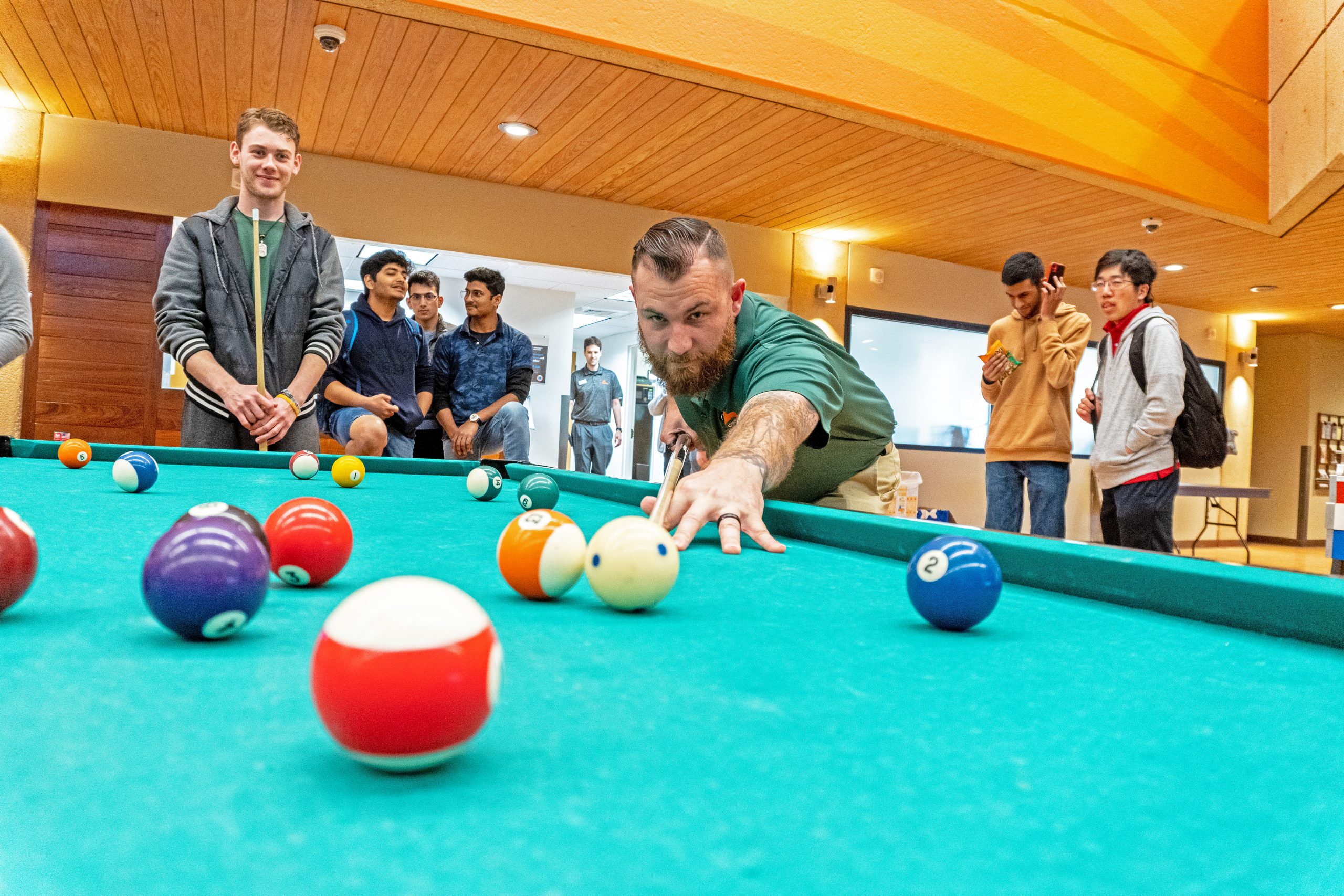 After transitioning from club to UREC team, Comet Billiards took home a first-place win at a recent UT Arlington tournament.

The team was recognized as a club last spring, and was registered as an official UREC team this semester. On Feb. 22, the team competed at the Mavsconi Cup VI hosted by UT Arlington, and computer engineering junior Chi-Quynh Nguyen won first place for C-Class. Criminology junior Jeremiah Kincaid said he was approached to be president of the former billiards club last semester since all the officers had graduated, and he wanted to turn the club into an official team through UREC to make organizing practices and tournaments easier.

“I can’t remember what the initial push for it was. I definitely wanted something bigger than just an informal club. I wanted to actually have an official team. One of the driving things was we weren’t allowed to reserve tables and have practices unless we were a UREC team. If we were a club, it would have been a lot more difficult, reserving it for a tournament, stuff like that,” Kincaid said. “It was just more of a logistic nightmare. It’s easier being a team somehow. It’s a lot easier to deal with running it through UREC.”

Kincaid has been playing for 15 years, starting in high school, but said he’s learned a lot from being part of the club and learning from other members. The team holds practices every Tuesday and Friday and runs drills for two hours to train specific techniques such as cuts and ball control, Kincaid said.

“The tables we have are two feet smaller than the tables we compete on and they need to be more well-maintained. So right now, just for our practice, we don’t actually play because playing on these tables isn’t going to help us compete,” Kincaid said. “There’s all different kinds of drills that we might run through practice and we’ll just kind of have like a line going, we’ll have everybody running through it, seeing who can get through it, what they need to work on.”

Mechanical engineering senior Justin Williams joined the billiards club with Kincaid last semester and handles most of the technique training during weekly practices. He said he notices people making fundamental mistakes when they play involving stance and stroke, and that being a part of the club was a way to leave behind something positive to the university.

“If we can gather this community and better all of them, then that only benefits everybody — it’s a positive experience,” Williams said.

The 10-ball double elimination tournament that took place in February involved billiards teams from universities across Texas, and everyone on the UTD team competed individually. Players are divided into A, B and C classes and compete within brackets.

During the championship, Nguyen won all five rounds, finishing off in the semifinals and finals against Lone Star College’s Andres 4-2. Nguyen said throughout his time he tried not to make mistakes while playing and, as a strategy to help him focus, would hold his breath until he felt light-headed and red-faced. He said he got distracted during one of the matches when his opponent congratulated him before he could make his shot.

“It was on the 10 ball. It was in the corner and I just had to make the small cut and I guess the guy I was facing was like ‘Good game, this is over cause it’s an easy cut.’ He walked up to me, shook my hand and it completely threw me off,” Nguyen said. “I was like, ‘The game’s not over yet. Please don’t do that.’ So, the guy assumed that it was going to be over and just that little break in concentration can throw you off completely or you overthink it so much, you end up missing a really easy shot. The 10 ball is basically inside the pocket and I completely missed it.”

Although the team has been practicing on the six pool tables in the Student Union, Kincaid said it was difficult to play on them because they need repairs such as re-felting, fixing worn bumpers and broken pockets. When the tables aren’t in good shape, gameplay is heavily affected because the ball can curve or change angles no matter how straight a player hits the ball. Once the tables are repaired, he said they hope to host an informal tournament at UTD with other UT schools next month and bring more awareness to UTD Billiards as a whole.

“I kind of feel like we have some of the out of the ordinary sports compared to a traditional university. There’s like no football team or anything, but we have chess, we have e-sports, stuff like that,” Kincaid said. “So, we figured why not turn billiards into a big deal here. If chess could be fourth in the nation, why can’t we?”