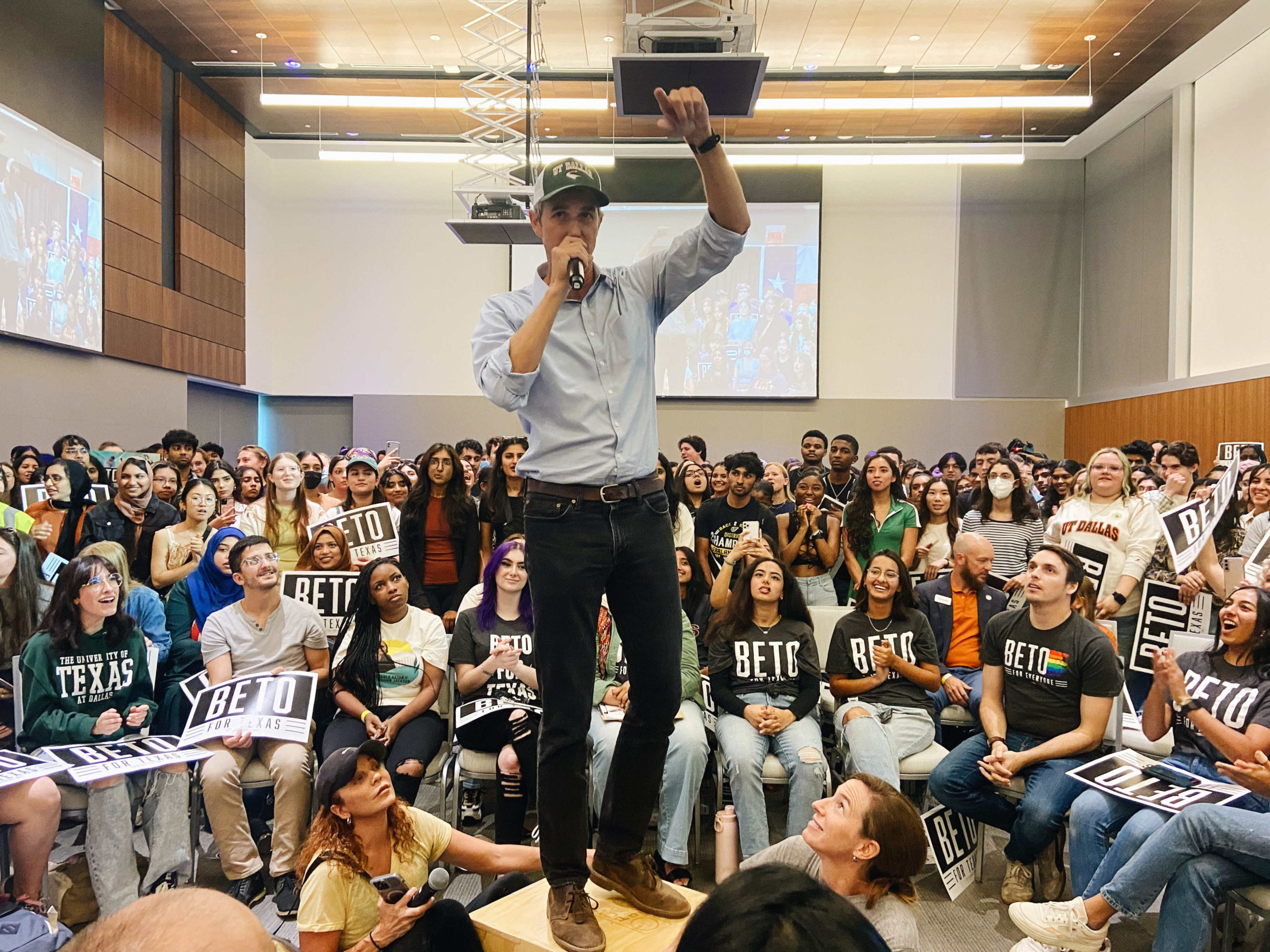 Beto O'Rourke made the campus visit as a part of the Beto for Texas College tour, organized by the League of United Latin American Citizens and Students for Beto. Photo by Rylee Russell | Mercury Staff

Democratic gubernatorial candidate Beto O’Rourke detailed his plans for potential governorship at a packed rally of over a thousand students last Friday.

The “League of United Latin American Citizens” and “Students for Beto” hosted O’Rourke in the David Gundy Alumni Center, where he discussed hot button topics such as economics, healthcare and abortion rights. This was O’Rourke’s second visit to UTD, as he spoke to comets in the SSA Auditorium during his run for senator against Ted Cruz in 2018. In November, UTD will be one of nearly twenty universities on O’Rourke’s Beto for Texas College Tour.

In painting his vision for Texas, O’Rourke highlighted his desire to legalize marijuana and end the STARR test as the crowd thrust their campaign signs into the air. Later in the speech, O’Rourke got into more polarizing subjects like condemning Abbott’s trigger laws that make abortion a felony, per the recent Dobbs v. Jackson decision.

“Don’t ever allow him to persuade you that this is about life or about heartbeats or about the life of the mother,” O’Rourke said. “This is about power and control, especially over women.”

Abbott, he said, “owns every piece” of Uvalde and other shootings in Texas, a state which—according to the Dallas Morning News—has the highest mortality rate from mass shootings in the country.

Those waiting to meet O’Rourke lined up all the way from Gunderson to Chess Plaza. O’Rourke took pictures and greeted supporters from all grades and degrees for almost two hours.

Neuroscience sophomore Soumya Joshi said she wanted to get involved in politics because she has hope in O’Rourke’s promises for Texas.

“I think this new generation has a voice and has a community that should be heard,” Joshi said.

In an exclusive interview with The Mercury, O’Rourke touched on issues closer to the hearts of UTD students.

“I want to make sure that the use of state resources is a little bit more equitable across public universities in Texas,” O’Rourke said. He prefaced “giving the same share of funding” that UT Austin and Texas A & M receive to schools like UTD, UT El Paso and Sam Houston State University.

“When we do that, it means that they can offer more students the ability to attend those universities,” O’Rourke said.

He also wanted to revive programs that would pay tuition “for those willing to go into underserved or in-demand professions in communities that don’t have enough … nurses, psychologists or doctors.”

Psychology junior and president of LULAC Nathalia Patricio said that inviting O’Rourke onto campus aligned with LULAC’s goals for mobilizing the Latinx community. LULAC hopes to get people more involved with politics and pursue educational and economic opportunities.

“A lot of us are unfamiliar with the different processes because we come from a family of immigrants,” Patricio said. “We’re here to educate our community and show our people that it’s easy to have people register to vote. And we hope that this event made it easier for the UTD campus in general to register.”