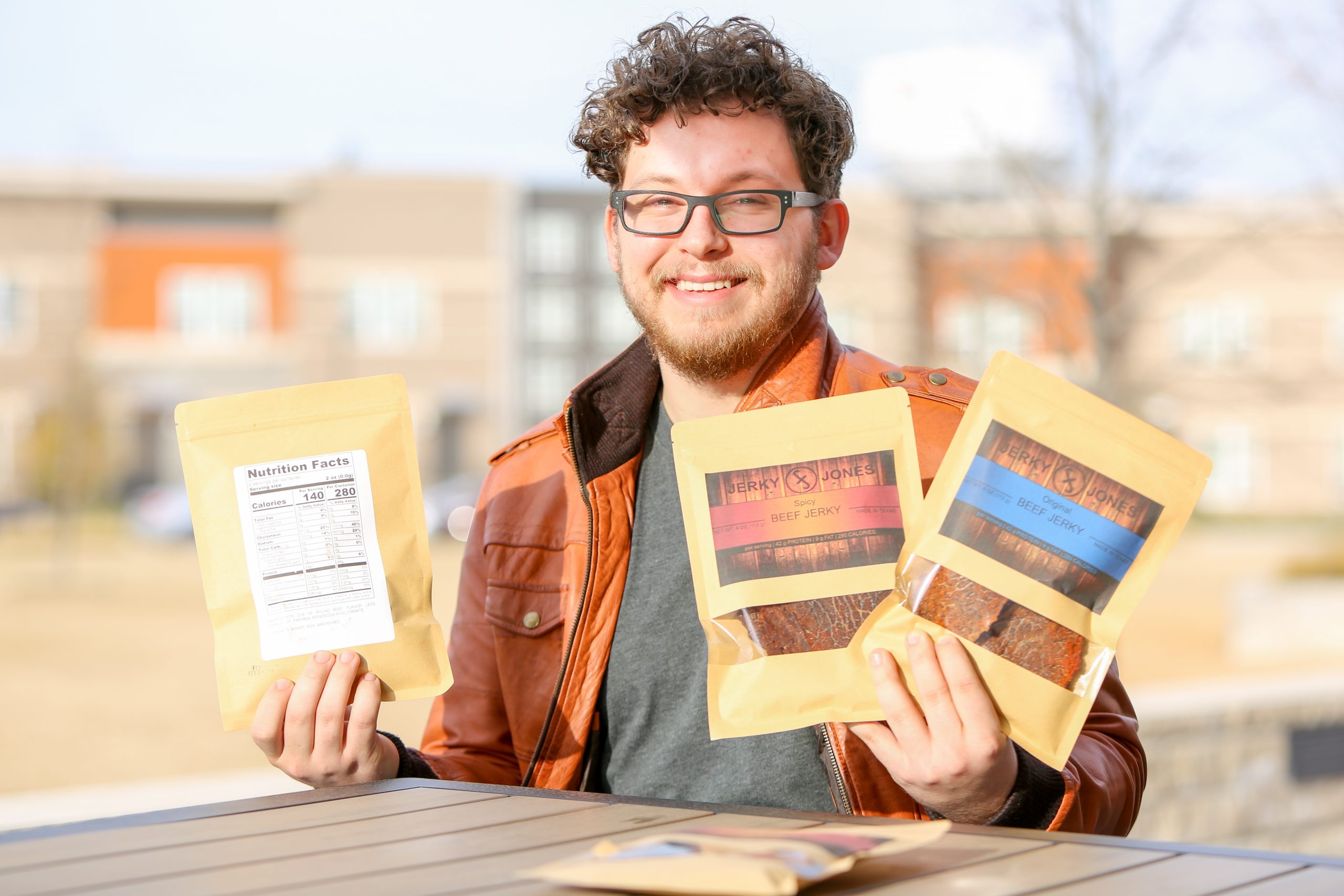 Jones first started making and selling beef jerky to family and friends when he was in high school. Photo by Roshan Khichi | Mercury Staff

For business administration and marketing junior Johnathon Jones, his beef jerky business –  Jerky Jones – is more than just a side gig: it’s a connection to family and his place in the military community.

Jones grew up with his father in the military, which meant frequent moves and substantial distance from extended family. When the family did get together, Jones’ uncle – also a member of the military – would make jerky as a parting gift to take on the road. The family significance of beef jerky inspired Jones to make and sell it himself.

“One day I asked [my uncle] for the recipe, I added some stuff to it myself, tweaked it and that’s how I ended up with the recipe I have today,” Jones said.

Jones first started making and selling beef jerky to family and friends when he was in high school but stopped as he got busy with other jobs and moved to college. After his freshman year, Jones moved out of the dorms and into an apartment with enough space to make jerky, so he decided to pick it up again.

It was during the fall 2020 semester – after buying a higher-quality dehydrator – that Jones started developing Jerky Jones. He did everything in the jerky-making process at home, from marinating, slicing and dehydrating roasts to printing labels and packaging the jerky. The meat, Jones said, has to marinate for up to 14 hours and dehydrate for another seven.

“The best way to explain the process is a lot of low with high spikes in work,” Jones said. “It’s definitely a lot of peaks of work, followed by just this long stretch of time waiting.”

Because the process can be lengthy, Jones makes batches every two weeks, with specific restock dates listed on the Jerky Jones website. He currently offers beef jerky in Original and Sizzling Spice, which is flavored with cayenne pepper, chili powder and paprika.

In addition to the time spent making the jerky, Jones recently invested in a domain and created a website for Jerky Jones. He also spends time working on the business’s social media accounts, which Jones said have become increasingly important in light of the pandemic.

“When I was in high school, it was very much word of mouth; I’d be able to walk around with a small bag and hand out samples, talk to people and have more of that person-to-person sales experience,” Jones said. “But with the pandemic . . . even with access to campus and being so close to all the students, I don’t get to have that same level of interaction with them. So, I have to do a lot more of my marketing on social media.”

The business’s connection to the military goes beyond a childhood memory: Jones credits his father’s GI Bill benefits with granting him the free time to develop Jerky Jones. As the business grows, he’d like to give back to the military community through hiring veterans and doing fundraisers for military families.

“The biggest thing I want [Jerky Jones] to become is, I want to eventually kind of give back to the communities I was raised in,” Jones said. “I’m really hoping that this business can eventually evolve to the point that I can use it as a tool to do all of that.”