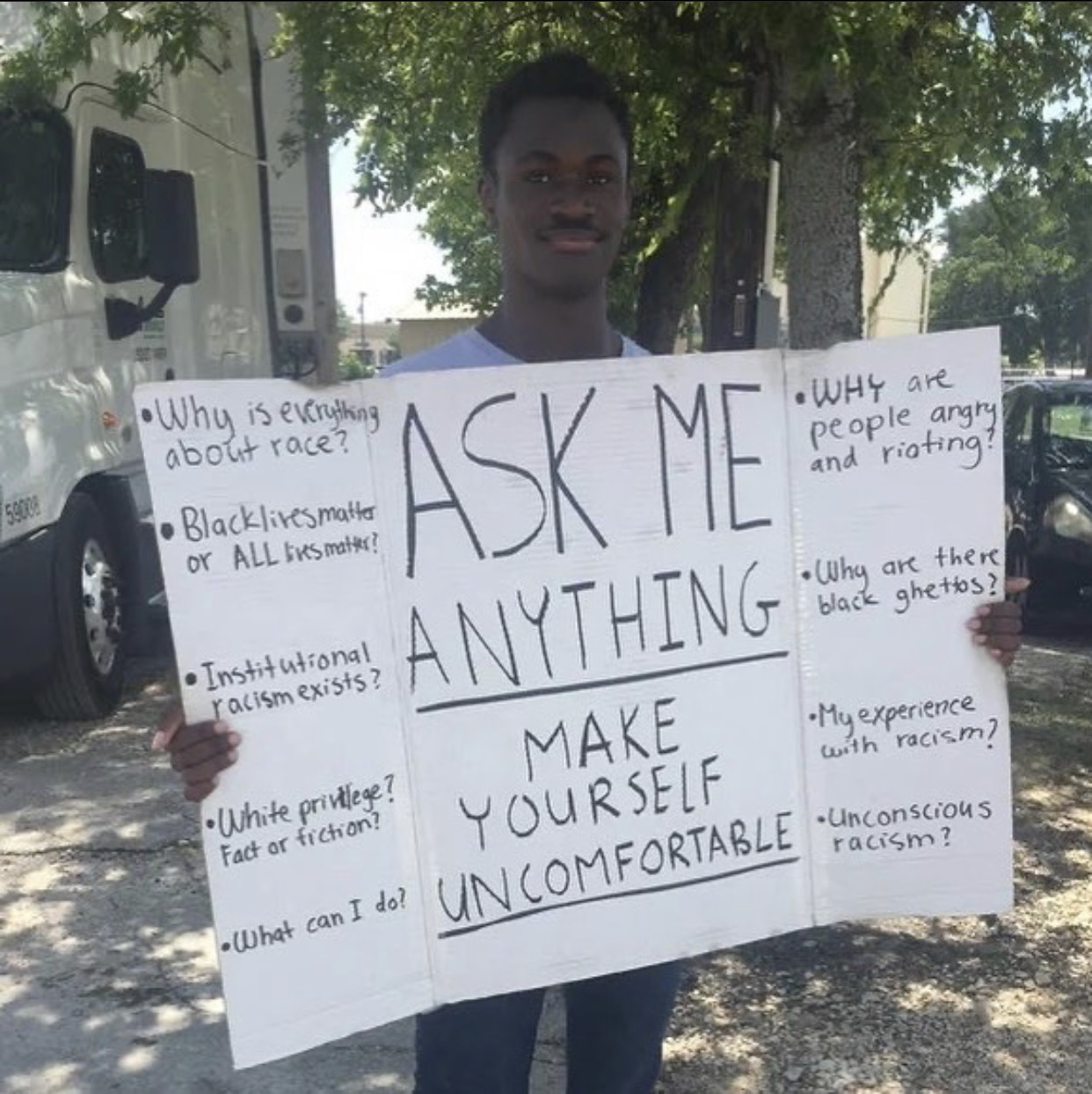 Following a series of viral social media posts, UTD junior Nifa Kaniga’s activism as part of the Black Lives Matter movement has gained national attention. With over 30,000 followers on his Instagram, the literature major and Dripping Springs native’s encouragement of an open dialogue about social issues is now reaching a global audience.

Holding a sign reading “Ask Me Anything” and encouraging passersby to discuss Black Lives Matter and racism in the U.S., Kaniga first took to the streets of Dripping Springs in early June. Before eventually extended his platform to social media, he said he hoped to encourage an honest civility in his exchanges that anonymous online conversations lack.

Describing his hometown as “mostly conservative, Christian and White,” Kaniga said he saw an opportunity to teach others about his experiences with racism. Standing outside for up to seven hours at a time, he said his interactions were with people driving or walking by him.

Despite the attention brought to the Black Lives Matter movement by George Floyd’s death, he said there were still misconceptions he hoped to address.

“It’s not even Black Lives Matter, or any race related topic. It’s just life in general. We humans have a very hard time listening to other people because ego plays a big part of that,” Kaniga said. “You say something to somebody, they get defensive and they don’t want to listen. It’s very frustrating, you know, because it’s like you’re trying to have a genuine conversation with somebody.”

After prominent news organizations and celebrities including Kristen Bell and Rainn Wilson took notice and reposted stories of Kaniga’s activism, viral news stories and social media posts amplified his message. Since then, his follower count on Instagram has grown exponentially, now allowing him to hold live sessions with listeners tuning in from around the world.

Despite the mainstream attention he and his message have received, Kaniga said he hasn’t let it affect the way he interacts with others, saying he hopes to stay true to his own opinions. When publicly discussing Black Lives Matter, he said that he hopes others understand that Black people are not a monolith, emphasizing that neither he nor those destroying property speak for the movement as a whole.

Similarly, Kaniga said that his conversations with dissenters of Black Lives Matter had shown him the diversity of identity and opinion among conservative Americans.

“Just like the left is not a monolith, just like Black people are not a monolith, the right is also not a monolith,” Kaniga said. “Nothing is a monolith, but actually hearing those people talk and exchanging ideas, agreeing on some stuff, disagreeing on a lot of stuff and telling them my experiences and having them listen, I think that just drove the point forward, that people are different, people have different opinions. Some people are going to understand and walk away with the perspective that I gave them and some people aren’t, and that’s okay.”

Part of the message Kaniga said he hopes to encourage is for viewers to have similar conversations in private. To that end, he said entering these dialogues with a sense of self-awareness and empathy is important for an effective exchange of ideas.

“Ask yourself on a conscious level, ‘Am I saying this to try to prove that person wrong? Or to make them look stupid? Or to make myself look good?’ People need to ask themselves those questions so we can have genuine conversations with each other,” said Kaniga.

In his own personal life, Kaniga said that he was grateful to have seen little change among his family and friends. Especially when discussing race, he said he was glad to still be perceived as a normal person representing his own views.

Upon completing his degree in literature, Kaniga said he hopes to transition into a career teaching high school students. With no interest in pursuing his platform professionally, he said he will continue to be an active voice for change.

“I’m a Black man in America. This stuff affects me, so I’m always going to keep talking about this stuff,” Kaniga said. “If people want to hear my opinions and my beliefs, then I’m an open book and an open resource.”

Nifa Kaniga can be reached online at his Instagram handle @nifakaniga.