Advice from one student to another 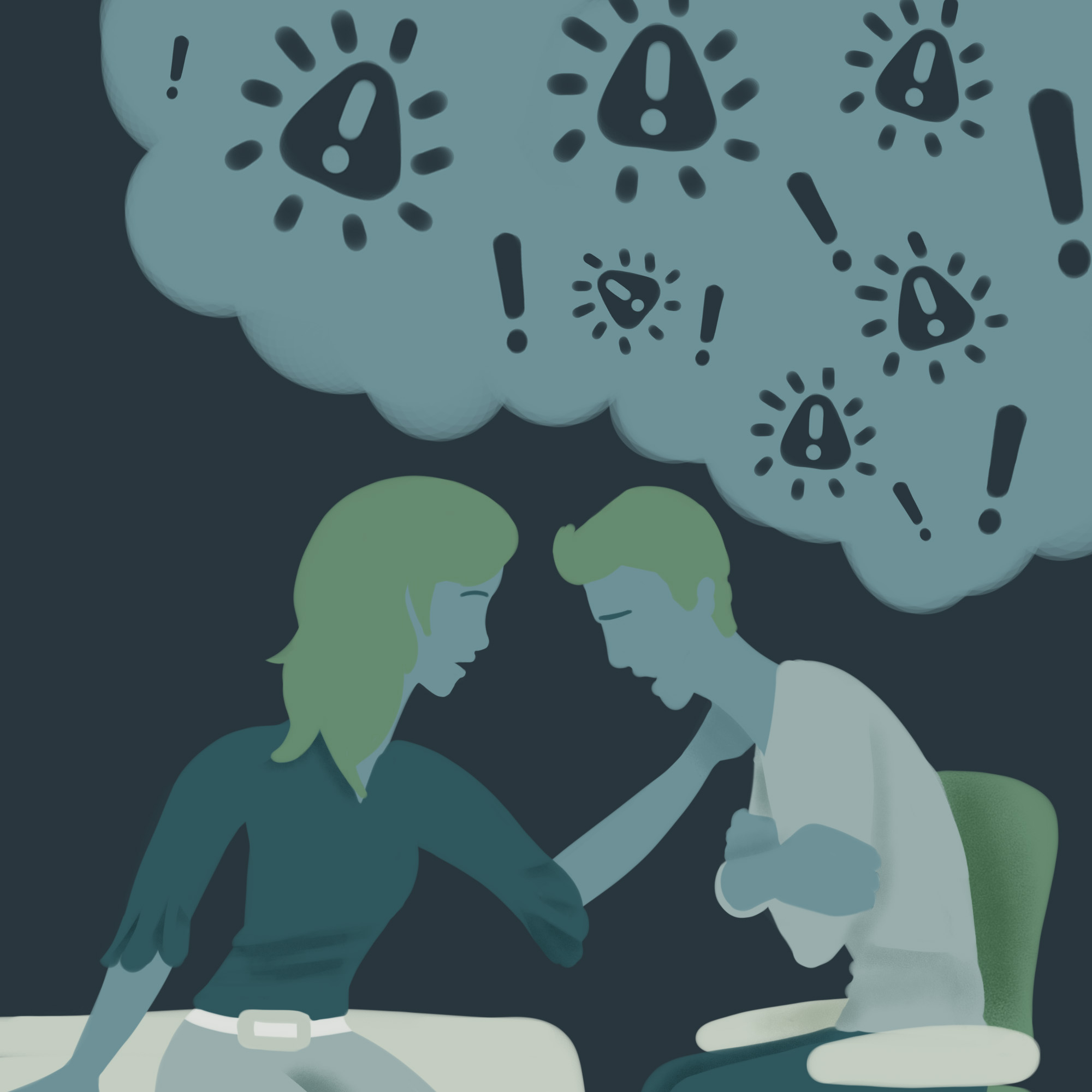 Q: What are the ways I can help a friend who is having an anxiety/panic attack? -B

Given that nearly 18% of Americans are affected by anxiety disorders, chances are you know someone who is at risk for a panic attack. If an attack strikes, stay by their side and lend them your undivided attention.

Feelings of anxiety and panic exist on a spectrum, and different people express them in different ways. Instead of just assuming how the other person is feeling, compare the common signs and symptoms of generalized anxiety with panic attacks to determine the best course of action.

Anxiety is typically an excessive and irrational worry or fear about an everyday life situation. This is not to be confused with nervousness – an entirely normal response to a stressful event like giving a big speech or moving cities. While nervousness, anxiety and panic can all cause shortness of breath, rapid heart rate and trembling or shaking, panic attacks tend to be much more severe. In fact, such feelings of stark terror often bring with them a significant loss of control or even a sense of imminent death. Whereas nervousness and anxiety gradually build up at the onset of an emotional trigger, panic attacks usually come completely unprovoked, with no rational explanation whatsoever.

Panic attacks can be incredibly terrifying experiences – both for the subject and the observer. While it’s easy to freak out upon seeing someone else gasp for air, sweat profusely or look nauseous, do your best to remain calm. Your composed and collected behavior will serve as a model for the other person to follow.

While your first instinct might be to try and alleviate your friend’s pain as quickly as possible, resolving their problems isn’t your responsibility. They know their situation best, so instead of trying to play doctor or assume control, ask them about what they need. Some people (especially those with a history of panic attacks) have preferred coping mechanisms, but mental health professional Stacey Appiah-Opoku said they may have trouble articulating this during an attack.

“If this is a person that you know pretty well or…maybe they’ve told you some of their strategies (before), then I think it can be helpful to say something like, ‘oh, I know (you) said that breathing helps so let’s take some deep breaths together,’ or ‘I’m going to go run and get you some water’,” Appiah-Opoku said. “But if it’s the first time that you’ve been with a friend (during a panic attack), then I think really just saying, ‘I’m here if you need me, but if you need space, that’s okay too,’ and then kind of leaving it open to them as far as what they want is one of the most helpful things.”

As you console the other person, try to focus on action, not words. A reassuring and comforting voice can be helpful, but refrain from repeating things like “calm down,” “don’t worry” or “just relax.” While you probably mean well, the last thing anyone with anxiety needs to hear is that they’re blowing things out of proportion. It’s hard enough as it is to be vulnerable in front of others, so the least you can do is be empathetic and validate their distress. To help bring a friend away from anxious thoughts, Appiah-Opoku said to try a grounding technique.

“A lot of times, when we’re having a panic attack or feeling very anxious, our minds are racing, and it’s hard to just center in on one thing and be grounded,” Appiah-Opoku said. “A grounding technique could be like trying to notice how your hands feel on your desk…or counting how many desks are in the room – just something where you’re using any of your five senses.”

If your friend is willing, guide them through a grounding strategy or the 54321 method and engage them in light conversation. You could also ask them if they want to leave the room or go somewhere else; by no means do they have to stay where they are. The same strategies apply to those helping from a distance or in a virtual setting, Appiah-Opoku said.

Most panic attacks reach their peak within 10 minutes. If a friend’s symptoms do not improve after 20 minutes, you may want to contact emergency services or the Student Counseling Center for support. You could also encourage them to visit a therapist or family doctor if they have been experiencing repeated attacks. As always, remember to take care of yourself. Your willingness to help a friend will not go unnoticed.