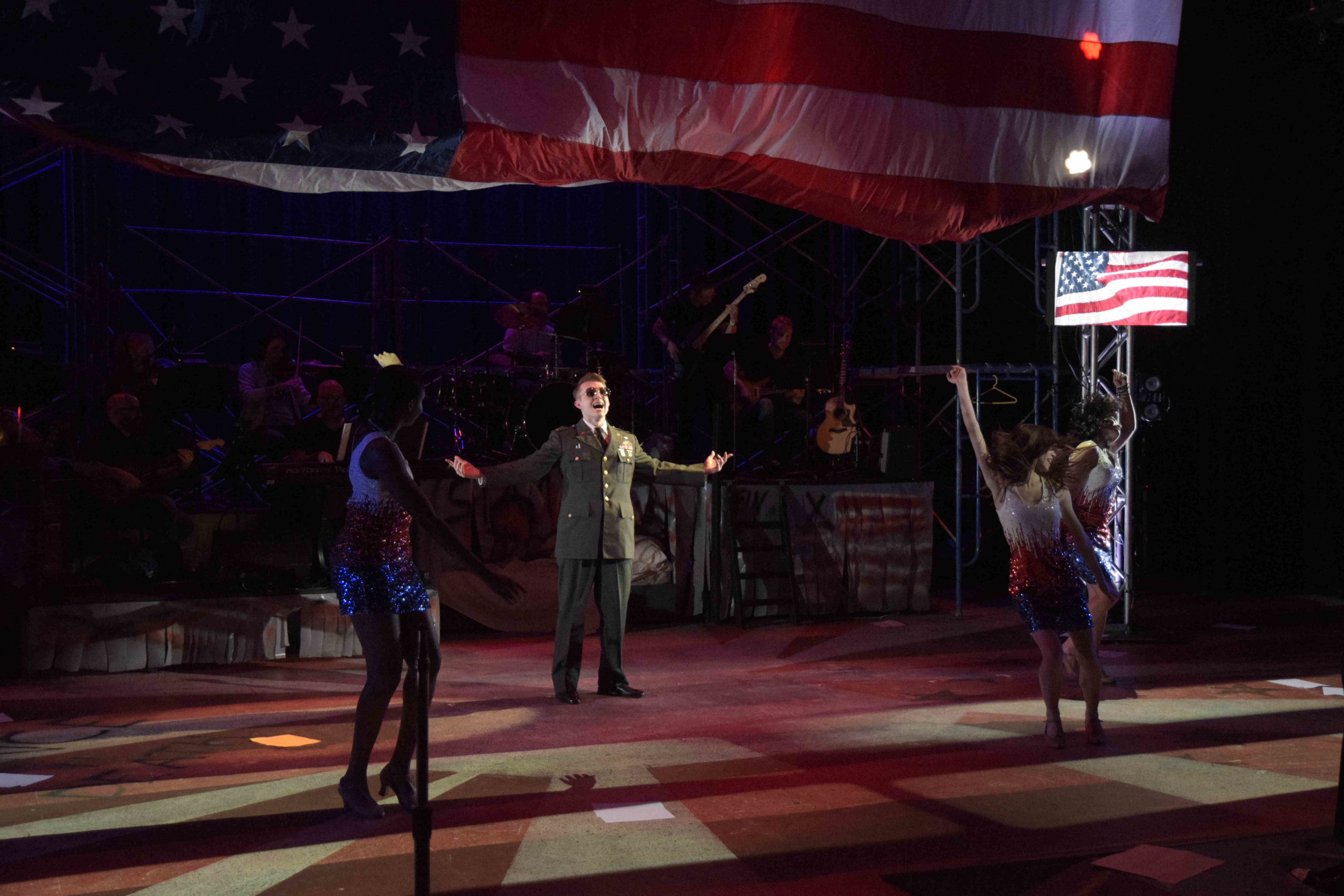 "American Idiot" is a musical where all of the lyrics are derived from Green Days' "American Idiot" album. The opening weekend was cancelled by COVID-19 infections. Photo by Katheryn Ho | Mercury Staff

You’d have to be an idiot to miss out on UTD’s performance of Green Day’s “American Idiot,” an award-winning musical that depicts the troubles faced in American youth

The audience should be wary of content warnings, as the play contains some nudity, drug abuse, mild profanity, mature situations, war scenes, haze, loud noises and strobe lighting. Heavier content is needed to portray the ruinous consequences of drug addiction, and as a result, “American Idiot” differs from the average Broadway musical. “American Idiot” resembles a jukebox musical like “Mamma Mia,” incorporating preexisting songs connected through dialogue. Senior Jacob Turner — who plays Johnny — needed some time to adjust to the story’s heavier themes.

“A lot of other shows that I’ve done in the past have been very vanilla,” Turner said. ”This was one of the first shows that I really like got into an adult theme or just like more real subjects. And so I think it gives you perspective for one, because these are stories that are just vastly different from something that I’ve seen or done in the past.”

Based on Green Day’s concept album ”American Idiot,” this rock musical introduces a group of suburban youths dissatisfied with their world. Johnny, played by Turner, Tunny, played by Tanner Huffman and Will, played by Brandon Borick, all meet at Will’s house, where they decide to become more invested in their lives. Unfortunately, their journey is halted by love interests, detrimental friendships, the draft and familial responsibilities. With a simplistic set and minimalistic dialogue, the musical focuses more on presenting the characters’ shortcomings and evolution.

“So Billie Joe Armstrong, are like a mastermind when it comes to writing his lyrics for the ‘American Idiot’ album,” said McKenzie Kern, who plays Whatsername. “He really was very open about his hardships and what he went through in his life. He’s very transparent in all of his songs, and in addiction, and in love and in heartbreak. It’s just really cool being able to sing that on stage and get lost in the music, having a live band and feeling like you’re there and you’re performing it.”

In addition to the unique genre of music, the minimalism of the set — resembling a warehouse — is crucial to the storyline. The set consists of several moving pieces and 14 television screens which show relevant news headlines from the corresponding years. During musical numbers, the screens show abstract images that connect to the current song, with animations created by ATEC students. Wheeled set pieces work with the play’s dynamic story and bring intrigue to a minimal design. Actors used a platform blending into the crowd to communicate dialogue more directly, increasing audience immersion.

UTD’s “American Idiot” can give young students a new appreciation for their youth and provide all students the opportunity to travel back in time to the early 2000s punk scene.