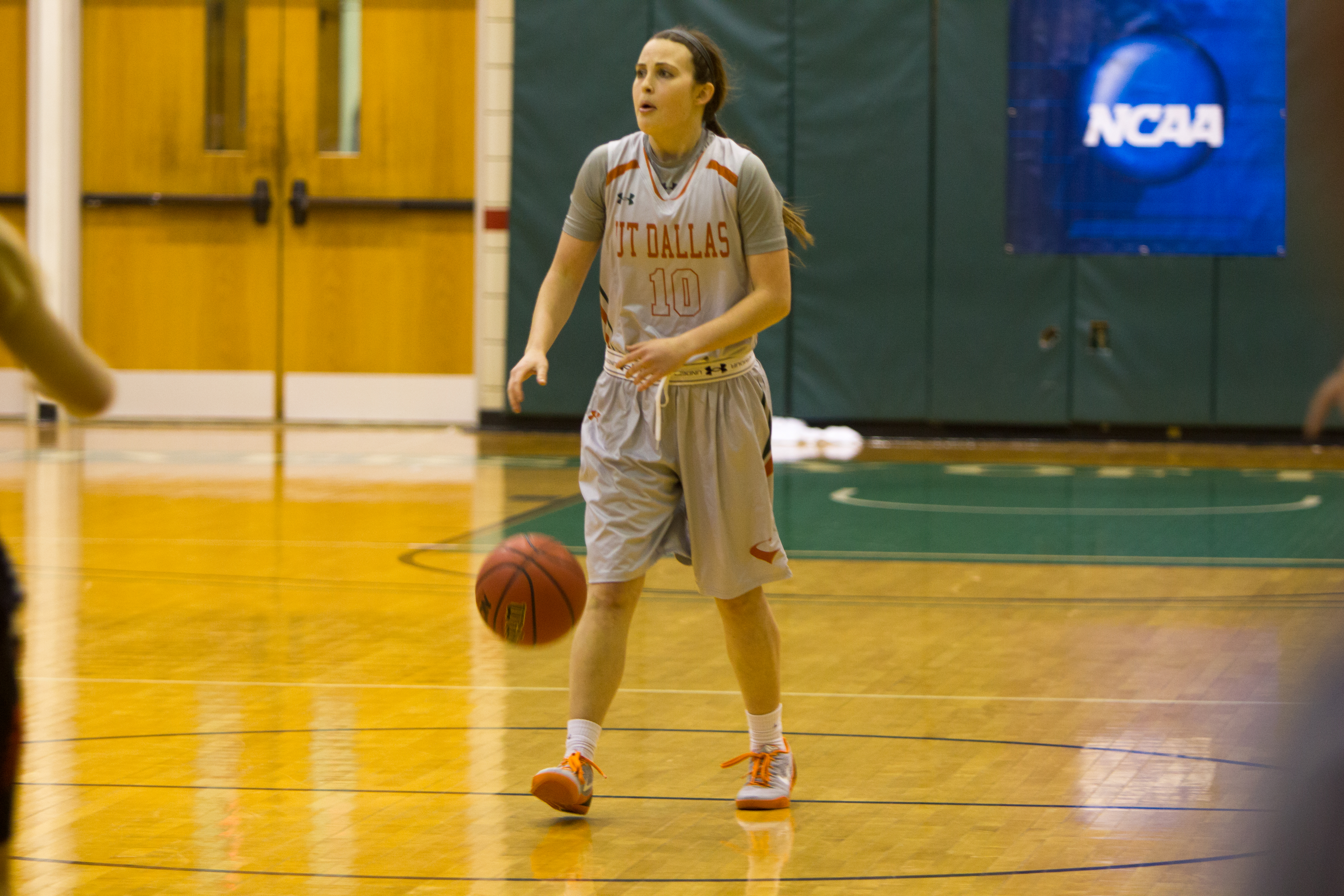 In front of one of the biggest home crowds of the year, the women’s basketball team took down Rhodes College 63-38 to pick up its first ever win in the NCAA tournament.

Despite their large margin of victory, the game opened up slowly for the Comets. A full-court press from the Lynx limited UTD to only 24 points in the first half and led to 17 turnovers before half-time. That, combined with early fouls for senior guard Madi Hess, left the team with only a 10-point lead heading into the intermission.

“We had a little bit of nerves in the first-half and we were playing just timid, I felt,” said head coach Polly Thomason.

Thomason said the team had to rely on their bench early to keep it afloat. Backup players accounted for nearly half of the teams points before the break.

“Thankfully, Madi has been in foul trouble before, so we know what to do and how to respond if she is sitting on the bench,” she said. “That goes to what Madi said earlier. I think we just have a deep bench that we can rely on. When someone needs to step up, they do a great job of it.”

Coming out in the second half, the Lynx were able to continue to pressure UTD, but their aggressive defense soon put them in foul trouble. Hess, who didn’t pick up a single point before the break, said this helped her get back into a groove.

“I think just having that mindset of ‘OK, I’m a senior. There’s no way we’re losing this game on our home court. We’re better than this team,” she said. “Every loss we’ve had this year I feel like we beat ourselves so I wasn’t going to let that happen again.”

In the second half, Hess was able to turn it on as she picked up a game-high 19 points, going 6 of 9 from the field and 5 of 5 from the free throw line.

This, combined with the team shooting 50 percent of its shots, saw the Comets pick up 39 points in the second half. For Rhodes, shooting problems continued as they only hit 8 out of 27 shots. Senior guard Sarah Johnson said it was difficult to come into the game after a lack of practice time due to the wintery weather.

“I couldn’t leave my off-campus house for two days,” she said. “That really put a little glitch in our system. In the conference tournament we got hot and that’s why we were able to beat the number one seed in our conference by over twenty points. I think that that may have put a damp in there, but you’ve just got to give credit to (UT Dallas). Their big players made big shots and big plays consistently.”

Johnson finished the game with 14 points for the Lynx. Another issue Rhodes faced was continued foul trouble. Junior forward Symone Daniels, who lead the Lynx with 17 points, was finally finding a way to muscle through the paint to get to the basket in the second half. Still, she was cautious on defense after picking up three personal fouls in the first. UTD took advantage of this and picked up 16 points in the paint.

Two other Comets finished the game with double-digit points. Senior guard Amber Brown had 13 points, along with 5 assists and 7 rebounds, while sophomore forward Micaela Gonzalez finished with 10 points and 6 rebounds.

UTD plays again tomorrow at 3 p.m. against conference rival UT Tyler, who the Comets beat 82-74 in the ASC tournament championship game on Feb. 28. Tyler beat Southwestern University 75-47 in it’s first game of the tournament earlier in the day.  This will be both teams’ fourth matchup of the season.

UTD is currently 2-1 against the Patriots. The winner of the game will move on to the Sweet Sixteen.

“I think we just got the coolness of playing in the NCAA tournament and the jitters of playing in the NCAA tournament. I think we got that out of the way,” Thomason said. “(With) Tyler tomorrow, we’re going to have to play much better. We can’t turn the ball over the way we did. We just got to be ready to knock down the shots like we were today. It’s just great just to get that first game out of the way, so now, we can really see what we can do in this tournament.”