"Naked, with Fur" examines humanity at its most vulnerable 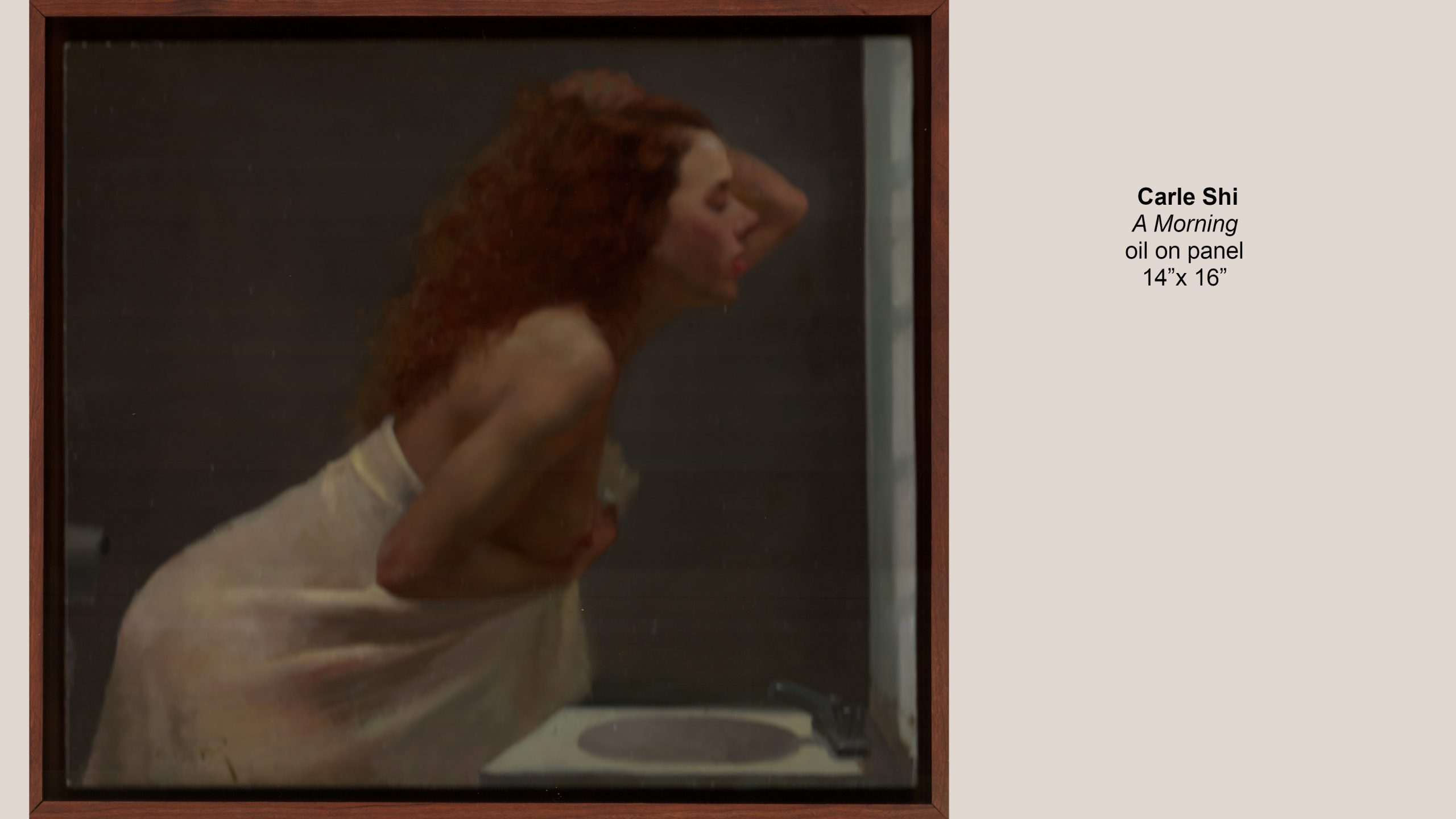 “A Morning” by Carle Shi – oil on panel

The showcase stands out as being the first all-faculty art exhibition at SP/N in over a decade. The pieces on display reflect contemporary issues like coronavirus and the Black Lives Matter movement. Other artworks delve into the mundane aspects of day-to-day life: a bundle of clothes heaped upon a bed or several dishes cluttered in a sink – household items left to pile up during self-isolation.

Greg Metz, clinical associate professor in the School of Arts & Humanities, said that the exhibition title Naked, with Fur describes the way humanity, during the pandemic, is “back in our own skins and living in our caves.”

“It’s a little bit of a reference where all we have is our creativity and our hair, you know, which could be our fur,” Metz said. “But also going back to maybe more prehistoric times when that’s all you had – your fur – to keep you warm.”

Naked, with Fur certainly doesn’t hold back. In “A Morning by Carle Shi” – a painter and lecturer at UTD – a woman leans towards the bathroom mirror, one hand pulling her hair out of her face. The slight blurriness and muted colors of the painting add an air of mystery and intimacy, like a photograph taken by a lover.

Some of the other exhibits do not shy away from the political. In Gallery One, Deep Fake by Greg Metz depicts President Trump in a swamp wearing a clown top, ruffled collar and witch hat bearing the word “Hoax.” Underneath his body lies the Statue of Liberty with a Confederate flag twisted around her figure.

Metz said that his history with political cartoons extends back before the camera was even invented.

“In the art world as well, museums were telling pictorial history of one’s country, the battles they fought and who were the esteemed characters,” Metz said. “In society, they were the ones who could have their portraits made. So museums really were the collectors of the history, but our museums now are more or less apolitical and deal with the contemporary genres.”

Metz said that he tries to take parts of history that seem to be game-changers in the landscape or movements of society – such as social conflict and political characterization – and create 3-D versions of them.

“One day, you’ll walk into a museum and you’ll go, what is that? And that story will come up about the conflicts in government, the polarization of the politics of the day and how things were portrayed,” Metz said. “I have kind of done my own kind of depiction of how the dialogue and the temperament has changed in the political arena, especially with this president, who seems to know no boundaries when defying civility or truth-telling or science and instead is engaging in the demonization of a united America.”

John Pomara, Arts & Humanities professor, has two digital paintings in the exhibition: “Facial Disruption 1” and “Facial Disruption 2” – both multicolored depictions of faces distorted by static. Pomara said that his work has always dealt with the boundary between traditional painting and digital culture.

Pomara, who creates his digital paintings by altering code over printing images and outputting them with a process that involves UV pigment ink, decided to create his art as an experiment.

“What if one came up with ways to disguise or disrupt facial recognition? So when you went through a scanner, all of a sudden you become somebody else or some other kind of a look?” Pomara said. “I want it to play with the notions of disrupting facial coding and recognition and to make it encoded into an abstract sort of face to disrupt it, to alter it, to break it down and put it back together in new ways.”

The artworks in Naked, with Fur are reflections of the uncertain times we’re facing during the pandemic, and Pomara said he wants viewers to see a sort of beauty in them.

The link to the exhibition is listed here.

Living in a twilight world