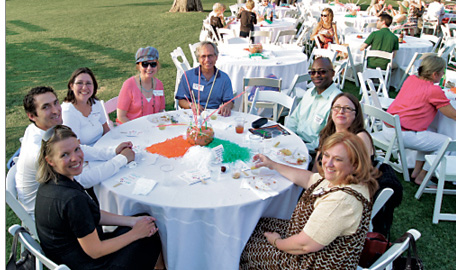 OFFICE OF DEVELOPMENT AND ALUMNI RELATIONS| Dean Dennis Kratz (center) sits with several UTD alumni during the Signature Summer Alumni Event at the Dallas Arboretum on June 2. The annual summer event is organized by the Office of Development and Alumni Relations.
Archives
Campus News
News

Due to a concerted effort by the university towards the development of alumni relations, 2010 was a record-breaking fundraising year for UTD with more than $40 million in donorship, UTD officials said.

But the alumni are not just giving back financially; they’re also giving their time through volunteerism, Dougherty said.

The Office of Alumni Relations has a Regional Representative program, which is a group of UTD alumni who have moved from the Metroplex to some other region or country, she said.

These individual alumni represent the university in their own community and make their information public on UTD’s alumni website so that any alumni moving to their region can contact them for help.

“(Last week, Zhou ‘Joseph’ Li) the regional representative from Beijing, China, randomly stopped by my office — he was in the area … and he just came in and we started talking,” Dougherty said. “He’s been contacted by three alumni just in the last year who moved to Beijing, and he said he played a role in helping two of them find jobs.”

Recently, alumni who live near the Metroplex and want to help out in events on campus have contacted Dougherty.

“In terms of alumni, I think some of the biggest contributions (to the UTD community) have been how many alumni are getting involved now,” Dougherty said. “We also had one young alumni who contacted us and she’s going to come out for Welcome Week and do face painting. She’s also interested in volunteering for other events.”

The university has set up donor societies to recognize alumni who give back to the university consistently. As part of the process of appreciation for donors, the Office of Development and Alumni Relations will be organizing an event called “Celebration of Support” on Sept. 15. At the event, the university will, for the first time, award and recognize donors who have given to the university at any level in the past year, Dougherty said.