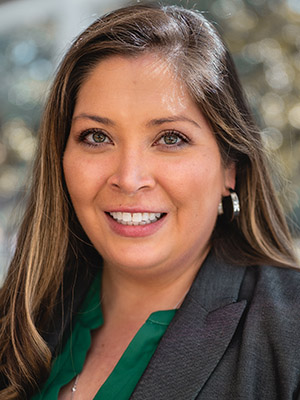 Effective Oct. 1, Bill Pettit is transitioning out of the role of Director of Athletics, and Angela Marin has been appointed to fill that role until a full job search can be completed.

Marin, who has been with UTD’s athletics department since 2012, was previously the Associate Athletics Director. She steps into this new role intending to continue UTD’s trajectory of growth and competitiveness with the conference and personify the diversity of Comet athletics. Meanwhile, Pettit returns to the position of Associate Athletics Director for External Affairs, a role he held from 2008-2014, prior to becoming the Director of Athletics.

Marin began her career in student athletics as a student worker in Texas A&M’s men’s basketball program, where she gained her passion for college athletics. After her tenure at A&M, Marin transitioned to the athletics department at the University of New Orleans, where she would spend six years initially coaching both basketball and volleyball before finding a long-term home in collegiate athletics administration.

“I came in post-Katrina, so it was a war zone with armored tanks, military personnel and enforced curfews. I was working with student athletes who had lost everything in that storm. So, to be able to connect with them and make sure that they had the experiences they deserved, regardless of the resources we did or didn’t have – we obviously lost a lot of resources due to that disaster – that taught me how to be resilient and resourceful.”

From New Orleans, Marin would transfer to a position at UTD in 2012.

“I’ve been at UT Dallas since 2012, and October 1 was my first day on campus, so that makes nine years today, actually. In that time, I’ve learned so much from Bill and from Dr. Fitch, both of whom truly championed my growth and my experiences here. I couldn’t imagine being anywhere else today.”

Vice President of Student Affairs Gene Fitch said, “we appointed [Marin] because of her familiarity with the program, and because of her leadership, not just here, but with the NCAA on both the regional and national level. She’s proven through her work that she’s highly capable of doing the job, overseeing the duties and responsibilities that are associated with it, and she has nearly ten years of relationships with the staff and coaches.”

Marin attributes her success as the product of several people and programs that have bolstered her career, placing particular emphasis on the initiatives of the NCAA.

“I’m a product of NCAA leadership development, and they have put so many resources and so much growth into me, but more specifically into people of color,” Marin said. “They’re really trying to make sure that we have a space at the table and not just a seat but an educated seat. I’m grateful to the NCAA for that, for those initiatives, because I feel prepared. I can’t see the future, but I absolutely feel prepared to step into this role because of the training that I’ve had and the mentorships that I’ve benefitted from.”

Marin also recognized a few of her mentors, without whom her career may not have culminated in this appointment.

“My first mentor was a men’s basketball coach at A&M, Buzz Williams – he’s now the head coach at A&M. He also hired me into the GA role in New Orleans. I was the only girl in that men’s basketball office, and he could’ve brought anyone, but he was the first one to say, ‘Gender doesn’t matter. If you work hard, and if you’re willing to put the time in and put our athletes first, I’m going to pick you.’ That was a really important step in my career. And then, of course, there’s been Bill Pettit. He’s seen my potential from day one, and I would not be here without him.”

Transitions of leadership, even when they more closely resemble reshuffling nameplates than organizational rebuilds, create uncertainty. So, Marin says her first order of business as director is to get on the same page with her staff.

“I will be meeting with all of my coaches and staff individually within the next few weeks. I want to make sure that they realize that just because I have a new title doesn’t mean it’s about me, making that sure that that foundation is there and that they understand that nothing big is going to change right away. My staff, my coaches and my student athletes are always going to be why I’m here. It’s funny: the more responsibility you have, the less it becomes about you. So, it’s still about them. Absolutely.”

After establishing that foundation, Marin said her focus will be on promoting DEI initiatives within the athletics program.

“One of my priorities is to continue working in that DEI space. I don’t want it to be a catchphrase in this department. I am the first Hispanic female to be in an AD role in D-III. It’s an honor, but it’s also 2021. It should have already happened by now. So, I want for all of our student athletes, our staff – really all Comets – to know that if you identify as an ‘other’ in any way at all, I see you. I am you. I represent you. That’s what athletics is about.”

It remains to be seen whether this will be a long-term position for Marin. Fitch explains that UTD will have to conduct a national search to fill the role of athletics director, although it seems likely Marin will serve as interim director for several months as that process plays out.

“We are required by policy,” Fitch said, “to post this position and conduct a national search. I have no doubt that Angela would, at that time, likely be a candidate. As far as a timeline, I hate to say it already, but the holidays are almost on us. That really impacts the hiring procedure, so there’s a very good chance we can’t start until we return in the spring.”

Whatever the future holds, Marin isn’t planning to waste her time as director.

“There’s a saying in our circle: lift as you rise. So, as I have risen, I’m bringing people with me, and that’s important for our student athletes to see. We, as females, have a voice; we, as people of color, have a voice, and I’m going to use that platform in the best way that I know that I can. I want them to see that whatever you want to do, you don’t let anyone silence you until you get there.”