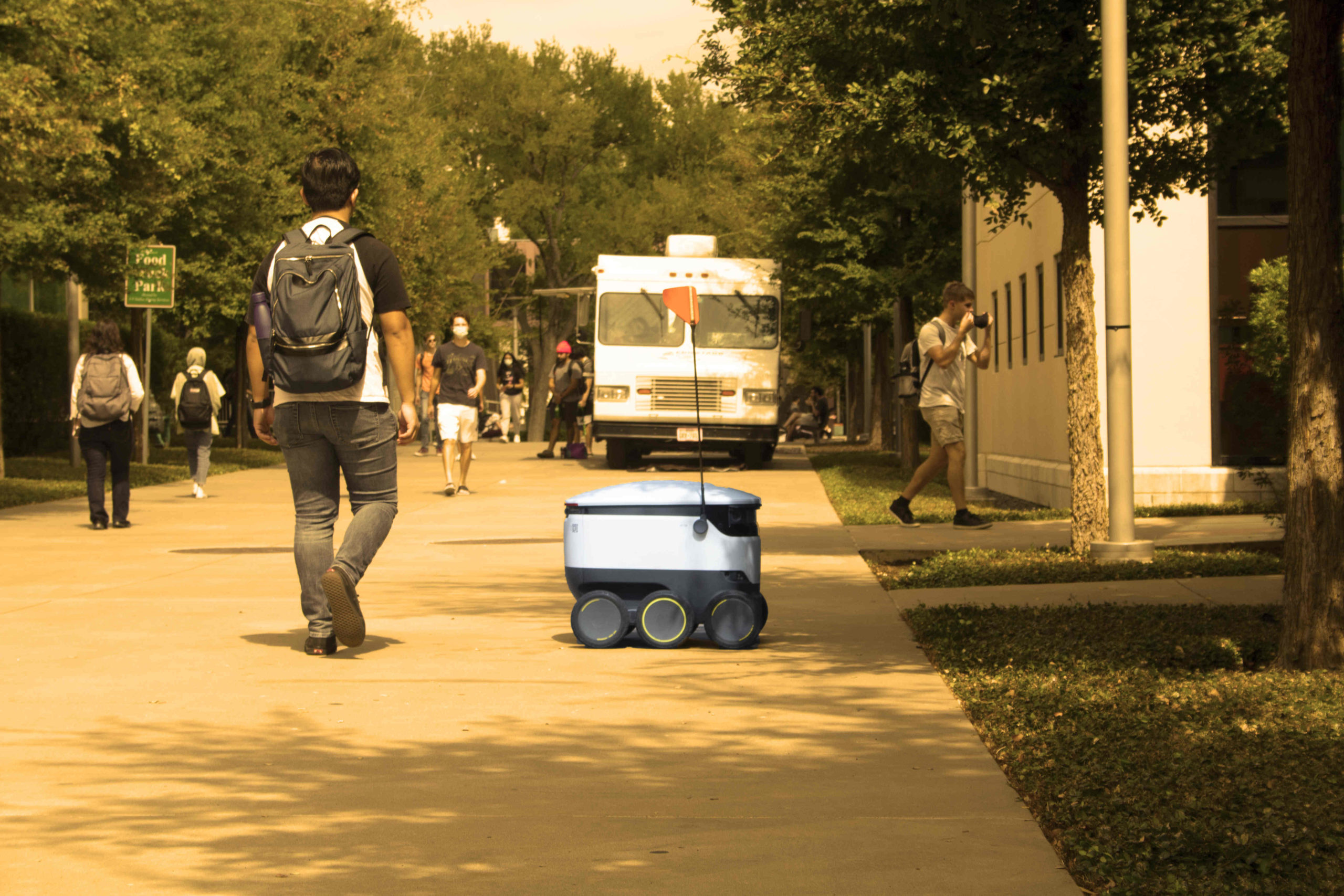 A recent incident regarding a few students who put a UTD food delivery robot in the trunk of their car gained a lot of attention among Comets online, attempting to speculate what intent could have motivated this act.

On Tuesday, Sept. 14, two students were recorded carrying a food delivery robot, or Tobor, to their car next to the Northside Drafthouse. Many onlookers perceived the event as an attempt to steal the Tobor following the Devious Licks TikTok trend, which features students vandalizing or stealing school property, and one witness even called campus police to the scene. The police arrived around midnight and investigated the situation to assess whether there was any damage to the Tobor. After a couple of hours of confirming that there was no damage, the police let the students go without pressing criminal charges and left the case to be handled by the Dean of Students.

Lieutenant Adam Perry, division commander for UTD’s Criminal Investigative Division, said, “in this particular case, it appears that it was some students who were going to a friend’s house who they knew really enjoyed robots. They picked it up and they took it over to their friend’s house, showed the friend the robot and then immediately released it, so there was no deprivation of property. They didn’t steal it and they didn’t have it very long.”

According to criminal law, for an act to be considered theft, someone must be deliberately deprived of their property. Since the two students who took the Tobor had no criminal intent behind their action, the Tobor was not damaged and it was immediately released, the students were not charged with any criminal offenses.

“Dining Services uses the robots from Starship to deliver food on campus. It is a very rare case that we would press charges when a robot is in an incident, whether it was hit by a car or taken, for this example, or [if] a wheel falls off,” said Michael Lamberth, area operations manager for the U.S. South Region of Starship (the company that makes the robots). “The on-site team up in Dallas, they go and they take care of it. They pick up the robot, bring it back to our office and then fix it.”

If the Tobor was damaged, UTD PD would press charges on behalf of the school for the damage, after assessing what on the Tobor needed to be replaced or repaired. Generally, the police would get a warrant for the arrest, and the perpetrators would go to jail and eventually court. Additionally, Starship could press charges and the Dean of Students would handle the enrollment status of the students involved.

Perry said “[the Starship robots] have 360-degree cameras, and so they are monitoring and recording everything that is happening around them. That’s helped us in times where someone has called and said, ‘I think somebody is messing with the [robot],’ and we get there and we can verify that no, they are actually helping them.“

Surya Purimetla, a business administration senior who witnessed the incident, said, “it did look like [the students] were stealing it. It did look very sketch, which is why the police were giving them such a long talk. Because I mean from the outside, it looked really sketchy and you got to keep in mind that’s what we saw.”

Videos and pictures of this incident were taken out of context when they were posted online. The videos showed blurry images of the two students, the Tobor and UTD PD, and as a result, the situation was decontextualized and interpreted as attempted theft.

Perry said “that’s the problem with our industry: when we have the public taking snippets of a video of a situation, it’s taken completely out of context from the broader understanding and what we find when we do the full investigation.”

The best thing that students can do, Perry said, is just let the Tobors do their job without disturbing them. If a Tobor needs some assistance, there are people on-site who can deal with the repairs themselves.

“This is the first incident where we have had somebody manipulate, touch or mess with one of the [robots],” Perry said. “This is the only time where somebody legitimately messed with the robots, and it wasn’t even criminal really.”