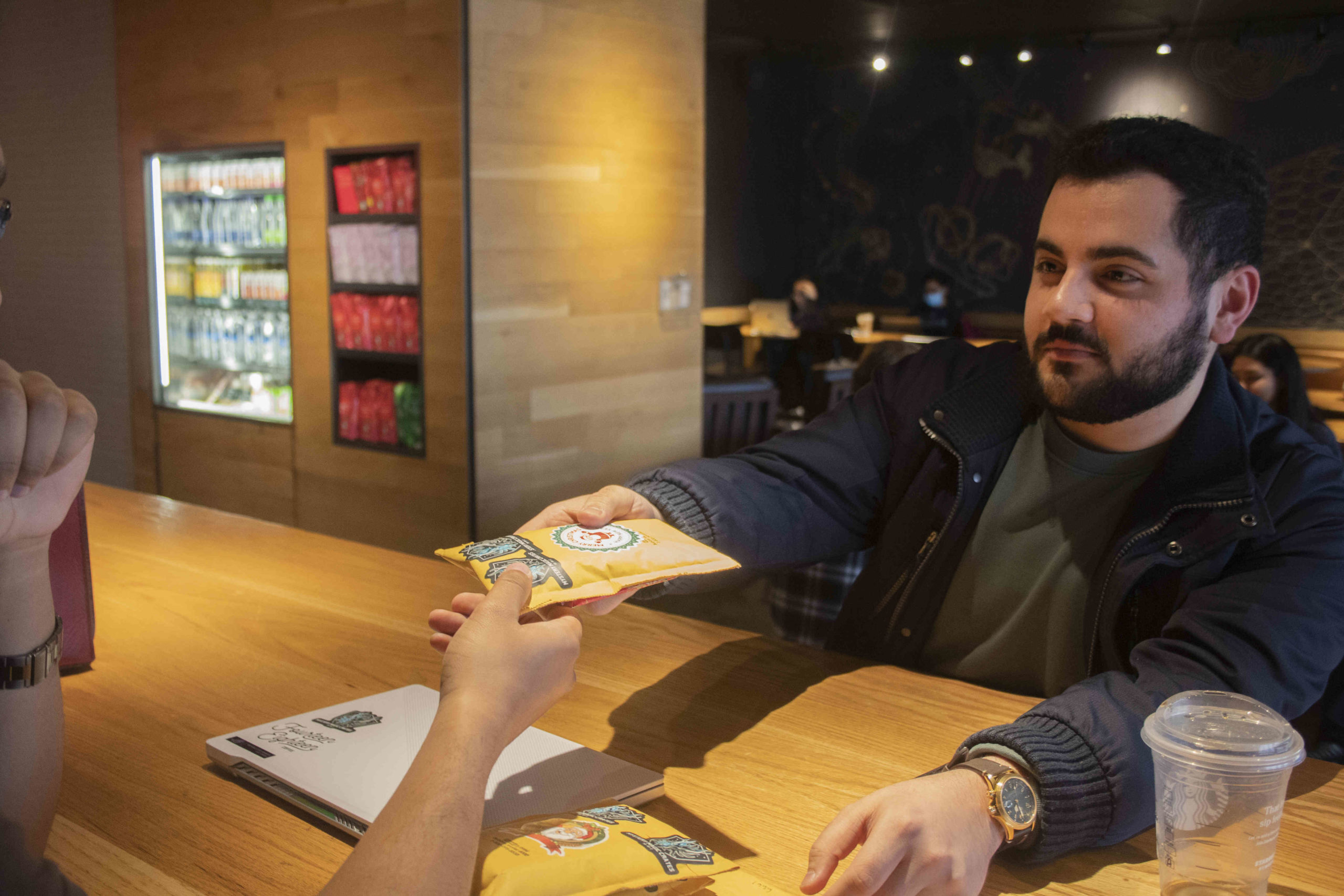 Mystery MTG owner Alan Hussein handed out some "Christmas Crates" in person on campus, each with it's own Christmas bonus attached on the back. Photo by Ben Nguyen | Managing Editor

A UTD alum is changing the way that trading card game players consume their so-called “cardboard crack” with a non-traditional LGS model and a focus on customer experience.

Alan Hussein is a UTD alum running the Mystery MTG card shop. He started it two years ago as a fully online retailer, wanting to change the way that people engaged with local game stores. A passionate MTG player himself, he wanted to start a business in a field he was interested in after leaving his previous company.

“What business do I think I would be passionate about? … Obviously it was a local game store. And we wanted to do it riskier, cooler, sexier than any game store that’s ever been started,” Hussein said. “We’ve quickly become one of the largest subscription-based companies for Magic the Gathering in North America, if not the world.”

And how is Mystery MTG the “sexier” game store? In comparison to most other stores, Mystery MTG offers a monthly crate service, similar to Loot Crate, that ships customers a package filled with different packs from various Magic sets as well as high value singles. One of the differences between Mystery MTG’s subscription service and other similar monthly services is a high guaranteed minimum value for the contents of each crate.

Buyers are guaranteed an 80% minimum value for the contents of any crate, and with the way that the MTG market is trending, crates that are shipped out by Mystery MTG will generally appreciate in value over time. So, Hussein says that the prospect of opening older and rarer packs for a fraction of the price every month is appealing to players.

“The majority of our customers over the span of the year make money subscribing to our service because we send out the oldest, the most rare products in combination with newer products. So, there is a risk, but at the same time, there’s a huge allure to that. Do you want to open a product from 2001, 2004, 1998? You do, and sometimes you don’t care what you get. Because that’s a nostalgic takeback to that time,” Hussein said. “Now that you have the disposable income and you want to do that, you have a couple of options. Are you willing to buy that box worth a thousand dollars, or will you subscribe to us for 39 dollars a month and we’ll send you packs of the sets that you want? That’s the way it works, and people love it.”

Even though there is a high guaranteed minimum value on each crate, Mystery MTG still makes money off the crates since not all crates are created equally. On top of this, they gain revenue through the general sale of single cards, board games and other related products. However, they also run raffles and sell specialty higher-value crates, and while they are running these at a loss, Hussein said they’re integral to sustaining their high customer retention.

“What it does though, when you get something that amazes you, is you become a long-term customer for that service. Our customers are die-hard. We’re one of the only services that have an 80% customer return rate,” Hussein said. “We have a very high average spend rate per customer. They like what they get, they know what they’re getting and there’s the verified authenticity aspect to it too.”

Soon, Mystery MTG will expand into a physical location on Campbell and Coit. Hussein has high aspirations for the space, from planning large MTG Arena esports events to hosting large in-person Magic events for thousands of players. Other stores have had their own challenges with Magic, with The Local Game Store notably not running Magic events on their schedule. Co-owner Kyle Waple said that players are reluctant to leave stores they’ve been playing at for up to five or even 10 years. Hussein, however, said he’s prepared to attract a large audience to his location.

“Even with just our online services, we make more money per month than almost any other LGS, outside of Madness, in Texas. So, we already pull the majority of these Magic players, and it’s because we do the craziest theme crates. We have just, a very exciting offering of products, and I think that these other LGS’s do everything in a very boring way. They are the exact same LGS that you walked into 20 years ago, and that’s why people are not coming back,” Hussein said. “They either align themselves with being a premium store or align themselves with being an affordable budget store. … I think a lot of people are looking for a store like ours where you are able to experience RNG in a way that you haven’t experienced before.”

With a physical location within walking distance of campus, Hussein wants the store to have all products on the shelves or available to purchase in-store, including the monthly crates and high rarity cards worth well over 10,000 dollars. Students will have discounts for crates, in-store competitions and the store in general that is set to open by January 16, 2022. In the meantime, Hussein and Mystery MTG are gearing up to maintain crate sales and facilitating customers’ desires to hunt down the rarest cards.

“I come from being a TCG player. I aim to make things affordable but also make them fun, and to also offer a premium aspect to it as well,” Hussein said. “A lot of people enjoy the hunt for some of these riskier products, and I don’t think that people should be discredited for enjoying that. … It’s just not as fun buying it from the store and having the card; I’d rather hunt for it.”