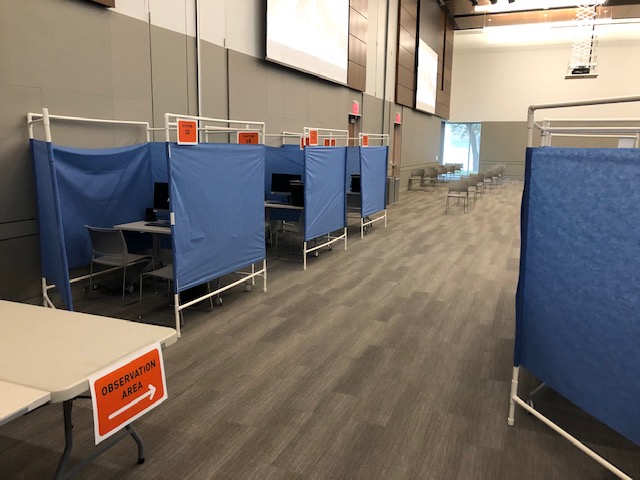 The site is located in the Davidson-Gundy Alumni Center.

Chemistry senior Roberto Ramirez stands outside UT Southwestern’s COVID-19 vaccine site at the Davidson-Gundy Alumni Center, smiling as he greets people walking in to get vaccinated. A woman who just received her first dose stops in front of Ramirez to chat. She tells him she appreciates the little decorations scattered outside the site and, more importantly, Ramirez and the other volunteers’ kindness. It was moments like these, Ramirez said, that made him feel like his three days of volunteering had paid off.

Ramirez is one of the 1,276 UTD students, staff and faculty members that Vice President and Chief of Staff Rafael Martín said signed up to volunteer at the on-campus vaccine site hosted by UT Southwestern. Volunteers were originally eligible to get vaccinated under Phase 1A but can now be vaccinated without the designation if they’re an adult over 16.

Martín said for the UTD vaccine site to run smoothly, UT Southwestern needed personnel to manage the greeting, screening and general functionality of the site. To help, UTD opened volunteer registration in early March for four-hour volunteer slots taking place in March, April and May. Martin said within 12 hours, the portal shut down.

“It was an overwhelmingly successful effort,” Martín said. “Slots were already filled through the end of April and May, and so many people registered, we actually broke the tool people were using to sign up. I think there’s this genuine desire for people to help after feeling powerless for so long, and the opportunity to get vaccinated was also there.”

Martín said a total of 1,075 students, 182 staff members and 19 faculty members signed up to volunteer at the vaccine site. Ramirez said he signed up for six of the volunteer slots and has already completed five.

“I didn’t hesitate to register,” Ramirez said. “I knew that UTD was going to need many hands on deck, and what better way to give back to the same school that gave me everything than to help out with the vaccine site?”

Ramirez said he started the week the vaccine site opened. When he arrived for his first shift, he went through a temperature check, COVID-19 symptom analysis and brief orientation – procedures that Martín said are customary for all volunteers. Ramirez said he was then assigned his role for the day: monitoring vaccinated patients for severe reactions such as fainting and nausea. If a patient experienced these symptoms, he and the other volunteers worked to get the patient water, snacks and a wheelchair.

“It’s endearing being able to share that service with other UTD volunteers and also with the UT Southwestern nurses and the phlebotomists,” Ramirez said. “Everything is structured in a way that there’s volunteers to help out from the moment you walk in, to checking in with the nurses, to receiving the vaccine and waiting after you get the vaccine to sanitizing the seats afterward.”

Martin said that volunteer roles rotate depending on what’s necessary at the vaccine site that day. After the four-hour shift ends, Ramirez said volunteers still have opportunities to help. He said UT Southwestern notifies volunteers of open shifts via email when other volunteers don’t show up or have to miss their shift.

“We can also just stop by on any day to ask the staff if they need help,” Ramirez said. “More than likely they will say yes, but the worst-case scenario is that they don’t need the help.”

When it comes to the volunteers’ COVID-19 vaccination, Martín said UTD sends a list of the volunteers set to work in the upcoming week to UT Southwestern to register into their electronic medical system. Once registered, volunteers can expect UT Southwestern to contact them within a couple of weeks to schedule their COVID-19 vaccine appointment. Ramirez said he was able to get vaccinated on his first day at the site.

“I was very surprised and overwhelmed to hear that UT Southwestern had extra vaccine supply for me and a few other volunteers,” Ramirez said. “They helped us set up an account with them while we were there, and we were vaccinated by the time we left.”

Martín said the vaccine site will need volunteers for as long as it runs, which should be at least until the end of the semester but could extend depending on community demand.

“I’m hoping more for society’s sake that as vaccine supply increases, larger vaccine hubs like at UTD won’t be necessary,” Martín said. “As the site runs though, we’re certainly grateful for all the folks who signed up to volunteer. They’re the ones making this initiative run so smoothly. We’ve got a very proactive community here at UTD and it’s really shown.”