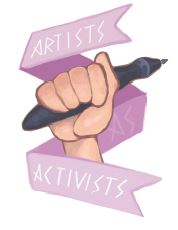 The smartphone has democratized digital art, rendering it simple for users to click-and-capture and imitate the professional craft of photography. With a press of a button, the picture of your foamy Americano or Nutella toast — along with a vibrantly nostalgic filter — can be shared with the world. Critics claim digital art is a fake art form because it’s perceived as requiring less time and effort. Though the discipline and exertion required to practice many art forms should be celebrated, it seems unjustified to discount other artists and their preferred mediums based on this sole factor. Rather than focusing on an artist’s exertion for an art form, more emphasis has to be placed on an artist’s strength and conviction to create art that can promote transformational change — regardless of whether it is in a traditional or digital setting.

Digital art is a means through which people can enter the political arena and play their part voicing their beliefs. The intersection of digital art and activism are two fields defined by shared characteristics: creating new paradigms and encouraging engagement that shifts boundaries. Both activists and artists share space in the challenges of the unknown — never truly knowing the final outcome of their work until it is finished. The experimental nature of both fields makes digital art a perfect medium for activists to spread awareness and even influence public opinion. Moving past discussions of the “easiness” of digital art and redirecting focus towards the messages of digital art pieces will help us recognize digital art as an authentic art form that is far more powerful than we realize.

One such photo was taken by Lam Yik Fei at Yuen Long during the Hong Kong Protests in July 2019. In response to a law that allowed extraditions to mainland China, the photograph depicts the police firing tear gas at hundreds of protestors while they clutch umbrellas above their heads. The umbrella, a symbol of resistance in these protests, evokes a sense of solidarity against the cruel act of the police and has the potential to gain sympathy in viewers, awareness for the cause and shift public opinion as they understand the severity of the situation in Hong Kong. The image demonstrates how a powerful photograph can sway public opinion.

Furthermore, an illustration by Eva Bee in Offline Comics portrays her view on the immigration crisis of 2015. Her art exhibits two hands above the ocean holding immigrants as they attempt to reach Europe. The hands, representing Europe, reflects the illustrator’s sentiment that the fate of migrant lives and their hopes lies in the hands of the European government. Bee’s perspective of the fragile nature of the migrant situation in 2015 was delivered to thousands through this illustration.

However, digital art’s impact on public opinion can be used for harm. During the 2016 US elections, Facebook accounts linked to the Russian government targeted a wide group of people by posting digital art in order to stoke division and rage within the country. Such groups included African Americans, Muslims and LGBTQ+ people. A Hillary Clinton digital art ad with a painted “X’ marked over her face heavily targeted pro-Trump supporters and aimed to fuel division between the two groups by garnering over 15,000 likes. Though digital art is a powerful tool in which to share political ideologies, it is upsetting to see it used as a means to incite conflict and anger within a nation.

Finding creative engagement through the digital art form is meaningful and empowers young artists all over the world to showcase their ideas, passion and beliefs to millions of people on the internet. It is a sad reality, as journalist Gauri Lankesh said, that digital art and propaganda can be used to “poison the political environment” by encouraging division instead of unity. Often, people fail to understand digital art’s relevance and implications. Our only solution to those who misuse digital art is, first, to be more aware of digital art that intends to provoke antagonism and second, refrain from bringing more attention to it.

As college students trying to place our mark on the world, we are sometimes confronted with the gloomy realities that are our future: topics including climate change, the student loan crisis and immigration reform. We must ask ourselves: what can I do to play my part?

Digital art serves as an answer to this question for many who desire to intersect their artistic passions with their appetite for reform on global issues. This is art. How it’s brought to life or what equipment is needed to create it is beside the point. It’s creating something meaningful to you, something that fights for your beliefs, something that allows people to see the world from your lens. That is art.