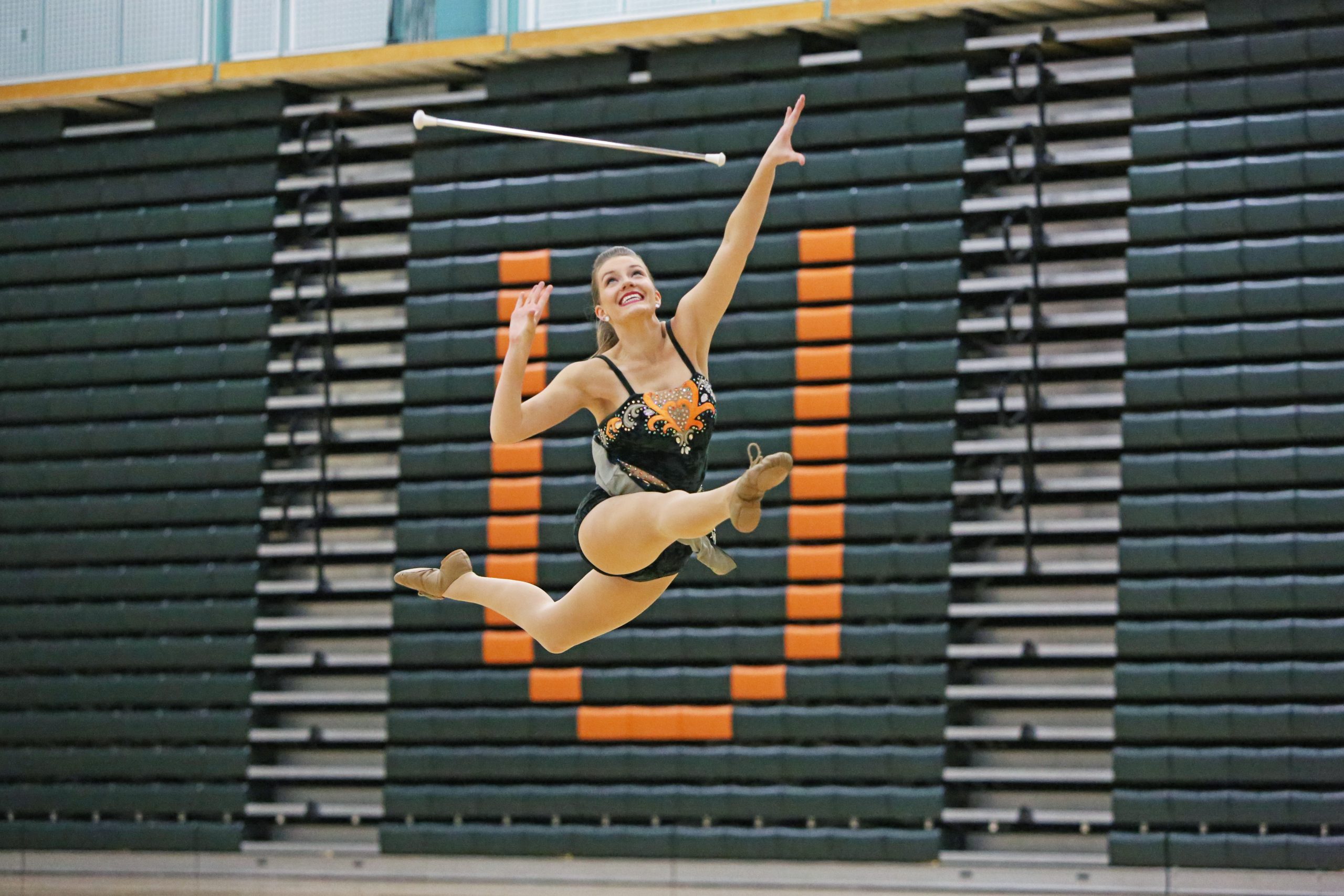 Child learning and development junior Samantha Prazak began baton twirling in her childhood and reconnected with the sport when she tried out for a high school team. Photo by Roshan Khichi | Mercury Staff

From the racquetball courts of UTD to the competition stage, Samantha Prazak demonstrates a talent that lies on the intersection of athleticism and artistry.

Prazak, a child learning and development junior, has been baton twirling for 13 years. Prazak’s mother introduced her to the sport as a child, but Prazak said it took tryouts for the high school twirling line for her to realize its importance.

“I put the baton down for a while and I didn’t twirl until I was about 14 years old, trying out for the high school line, so I picked it back up about three months before tryouts for my high school,” Prazak said. “When we went to tryouts I didn’t make it because I didn’t practice enough. The next year I tried out, I made it and it was so exciting. I joined an elite group and have been performing my entire high school career with them.”

“I loved watching twirling, doing twirling — it’s every aspect of twirling that I love, and I want to give back to twirling,” she said. “I was an instructor as a senior in high school and I still teach private (lessons) to this day.”

Prazak was the feature twirler at Tyler Junior College before transferring to UTD, and her coach introduced her to the National Baton Twirling Association and its competitions. Although she started this style of twirling at an older age than other competitors, Prazak said she has found success competing in the college division through understanding growth and dedication.

“Balancing everything is very difficult, especially knowing that I’m going to nationals this year too and I’m going to compete in the college division,” she said. “I’m a part-time worker, full-time student and part-time twirler. I have to go and put in those hours and dedicate myself to get better.”

Prazak spends two to three hours at the gym every other day in order to prepare herself for competitions and finds performance opportunities where she can. Even though the regional and state competitions are in the spring and nationals is mid-summer, Prazak said that there is no off-season for twirling.”

“Twirling is a sport. You mix together contemporary dance with ballet, and you’re using every ounce of your body to practice for these things,” she said. “If you go and watch these people, it’s amazing to see what your body can do.

At competitions like nationals, which Prazak has been to twice, she said she finds inspiration from other twirlers rather than seeing them as rivals. Prazak said that the world of competitive twirling includes not just the talent portion, which people tend to assume is the entire competition, but also pageants and interviews.

“When you go to the NBTA competitions, it blows your mind how great these girls are,” she said. “There’s no drama in this — you’re friends. It prepares you for later in life.”

Prazak said that she has found a culture at competitions that she has submerged herself in and found a community of people that she looks up to.

“I especially look up to Caroline Carothers, (UT Austin’s feature twirler), but that’s not just because of her twirling — I feel that if I want to look up to somebody, they have to be a great person too, and she’s just a great person,” Prazak said. “There are so many people that are so fantastic.”

One of the biggest challenges that she is facing as a transfer student at UTD is having to find opportunities to twirl, Prazak said, because there is no established twirling program. From asking UTD spirit programs to be part of their performances to teaching other on-campus groups such as Phi Theta Kappa, she has had to create her own performance events instead of relying on invitations from on-campus coaches or directors.

“It was really difficult for me to go out on campus and contact spirit, athletics, and the band to see who would let me perform on campus at any event,” Prazak said. “It’s a great thing to add to spirit programs or to band programs or to athletic programs. You can get out and be a little sparkle for people to see.”

Prazak is trying to spread twirling at UTD and make it a more established event on campus for other students who are interested in the sport. She said that twirling can be for everyone, which is why she is passionate about bringing it to more people.

“I’m in the process of starting my own organization, but you have to know advisors and people who want to be a part of it,” Prazak said. “If somebody were to pick up a baton today and start twirling it, they would be amazed with themselves at how much they can accomplish.”

For Prazak, twirling is a form of expression that she takes pride in sharing with others.

“My proudest moment is every moment that I am performing in front of a crowd. I’ve performed in hotel lobbies, for flood victims from Houston, in the UTD racquetball courts in front of kids’ camps — they would pass by and they all just stopped and watched me twirl and that was so fun,” she said. “I always strive to connect with an audience while I’m performing.”