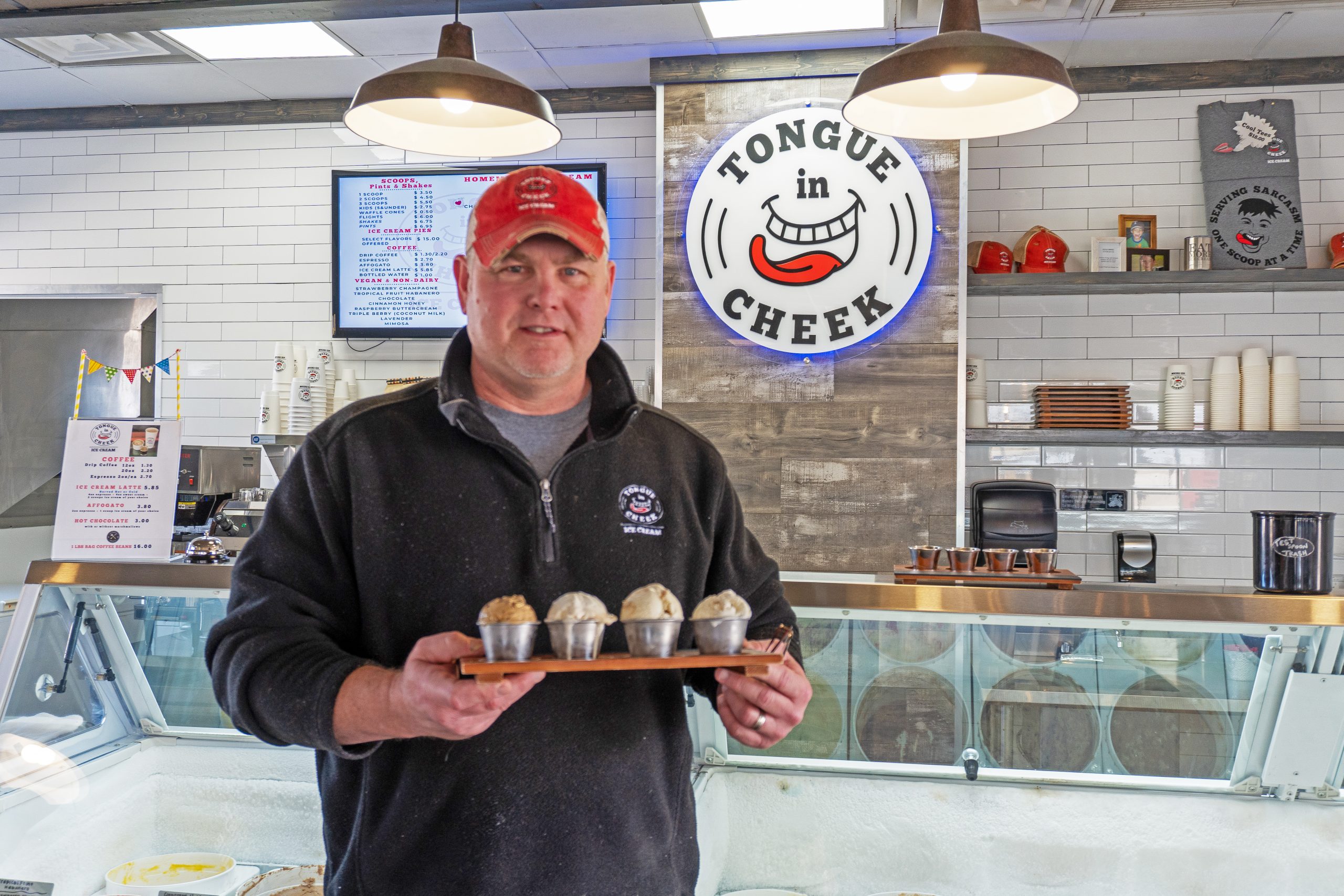 Owner Brett Smith was a firefighter before he discovered a passion for ice cream making and opened Tongue in Cheek. Photo by Grace Chang | Mercury Staff

If you’ve ever cruised down Arapaho Road following the bends, the brightly colored signs of shops all vying for your attention start to blur together. One sign, however, that stands out is a brazen graphic of a tongue sticking out at you with the words “Tongue in Cheek” surrounding it. If that sign alone doesn’t make you want to come in, then the ice cream will probably do the trick.

When walking in, an indoor swings seating area, a gleaming case of 24 ice cream flavors and a smiling face are the first things you’ll see. That smiling face is likely a member of the Smith family, including Brett Smith, Misty Smith and their two sons. Run almost entirely by the Smith family, Tongue in Cheek is a small batch creamery that makes each flavor by hand.

The store boasts a wide range of rich, unique flavors from banana pudding to chocolate fudge. Some of the more unusual ones include hatch pepper butter pecan, a spicy ice cream with candied peppers and creamy butter pecan, and jack and coke, which includes pepper to mimic the feeling that one gets when drinking alcohol. The shop also includes some delicious dairy-free options such as cinnamon honey and lavender, both of which are delectable without sacrificing the creaminess that dairy ice cream has. If you’re a chocoholic, the chocolate fudge is perfect for you. Brett makes the fudge himself, and the creamy, gooey texture of the chocolate is reminiscent of molten lava crunch cakes.

Although Brett has now learned the art of ice cream making, this was not always the case. Before opening Tongue in Cheek, Brett was a full-time firefighter, which is a job that he held after college until now.

“It was one of those times where you’re in between classes, waiting for the next one to start,” he said. “So I was just sitting there and there’s a booth for a Dallas recruiter for the fire department, and I went over there and looked at the brochure. This was almost 30 years ago now. They started out at $28,000 a year, you work 24 hours on, 48 hours off. That’s enough time for career on the side. So that’s what pushed me in that direction.”

In the two decades of working in the Richardson department, Brett enjoyed his time there, but one thing that he wanted to change was the food, he said.

“Some stations, you know, it’s just go to the store, just buy whatever it is,” B. Smith said. “Same thing every shift. I always get tired of the same thing. I want to create something new, different and try new flavors and learn how to make sauces and how to make all these things.”

He started experimenting. Each meal, the firefighters would pitch in some money, and that was his budget for the food. As time went on, he started making more and more dishes, Brett said.

“As I got higher up in my career, or later in my career, I started realizing that I don’t want to do the fire department thing for 30-35 years,” he said. “I would like to do something in the food industry. But I don’t want to do a restaurant because it’s so expensive to open up, so competitive, trends go in and out. You know, it’s just hard to survive in the restaurant industry.”

Restaurants were off the table, but it just so happened that another ice cream shop had approached him to make their ice cream.

“They said come in, try it out. So I did that. After about two weeks I was like, this is it,” Brett said. “The more I did it, the more I really started falling in love with the making side of it. The merging of flavors you normally don’t put together: the savories with the sweets, the spicy ice creams, the alcohol flavors and ice cream. I started working on a lot of the flavors that you can’t find at other places.”

The shop came to life. The name and logo stemmed from the silly face that their son made and also refers to Brett’s sarcasm, which he shares with fellow firefighters. The building was originally an Arby’s. Brett saw the vacancy, signed the contract and completed the construction by himself, the only exceptions being plumbing and electrical, he said. Misty, Brett’s’s wife, witnessed the whole rebuilding process and has been helping ever since.

“He’d spent over 1000 hours of self- education, watching videos, reading books,” Misty said. “I’d find him at 3:00 a.m. with his book open, reading about the molecular development of ice cream or what temperature it freezes or how to get it to a certain level where it doesn’t ice over and keeps it creamy. I mean, he knows anything there is to know about ice cream.”

To maintain the creation of the homemade ice cream, Brett, who makes the ice cream mostly himself, chose to forgo some of the ingredients that many of the chain stores typically use.

“I try to use as natural ingredients as possible,” he said. “So, when you look at our case, everything is kind of beige. Anything that has color, they’re from natural sources. You know, your raspberries come from real raspberries.”

It is because of these powerful and unique flavors that are packed into the small batches that customers come back for more. Although it only opened this past June, it’s already grown quite a following.

“We have our banana pudding. Every time I try to take it out, people just have a meltdown,” Brett said. “They’re like, ‘You gotta bring that one back,’ you know, especially the pregnant ladies, it becomes their pregnancy craving. I’m like, ‘All right,’ as soon as they say bring it back.”

In the shop, the Smiths’ passion for their customers, product and work is evident, but their support for each other is even easier to see.

“Every third day I’m gone, I still work as a firefighter,” Brett said. “Luckily, because I’m doing this with my wife, she takes a huge burden off of me … You know, the biggest struggle right now is being away from family. (Misty’s) here, my kids work here during the summer, but during school, they really can’t. So it’s just that separation: it’s a little greater than I’d like it to be.”