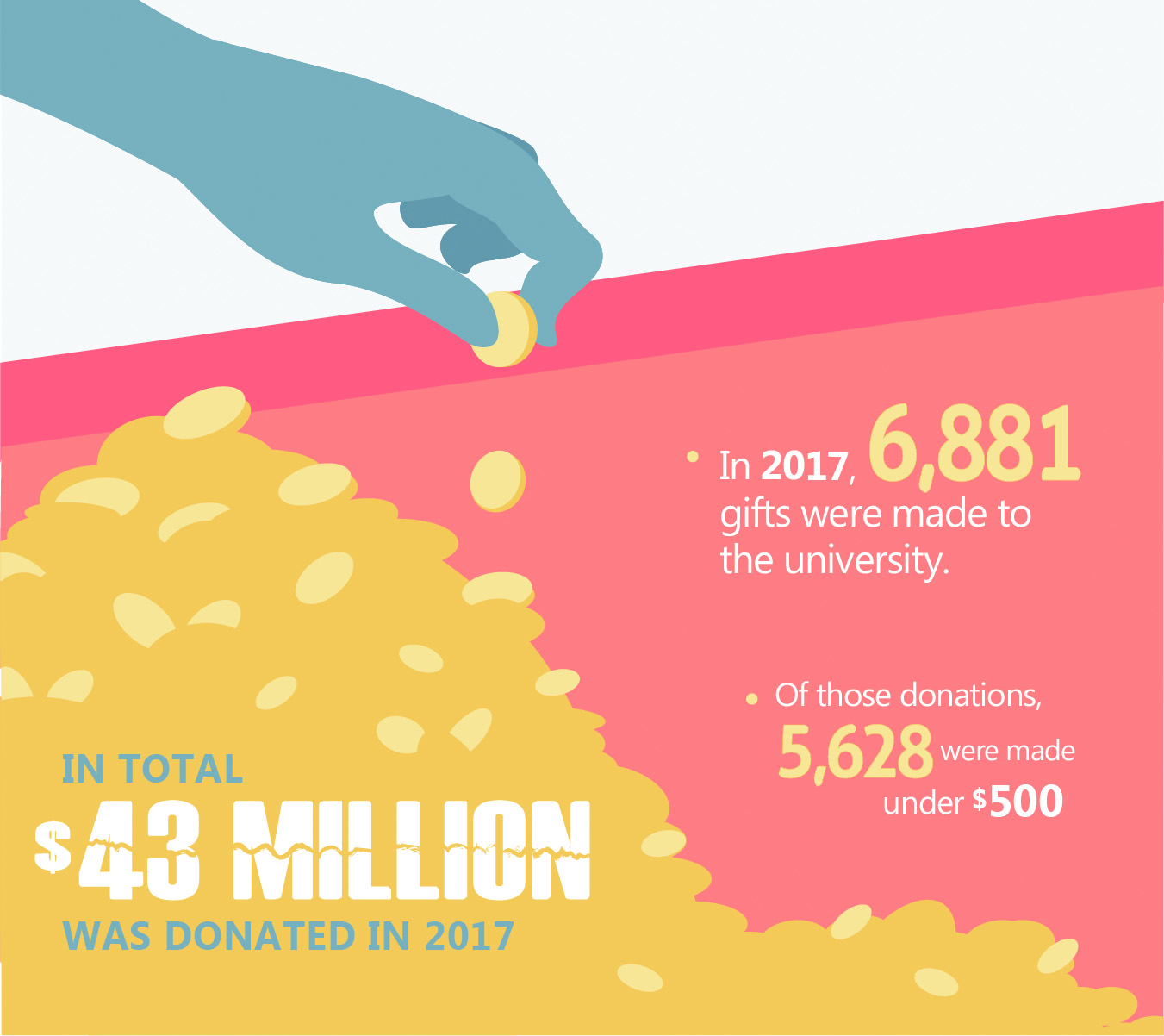 The rate of small donations to UTD is expected to decline this year because of the passage of federal tax cuts.

The Tax Cuts and Jobs Act of 2017 doubled the standard tax deduction, and Kyle Edgington, UTD’s vice president of development and alumni relations, expects a decrease in the number of donations made to the university under $1,000. These donations typically go towards new buildings, creating new endowments, graduate fellowships and other projects that are not fundamental to the university.

In fiscal year 2017, 6,881 gifts were made to the university, totaling 43 million dollars. Of those donations, 5,628 donations were under $500, and those donations contributed $407,000 to the total. Edgington expects between a 1 percent to 5 percent drop in the amount of money donated that’s under $500, starting in this year.

“If you were to look back over time, you’d see the state allocation to public higher education decreasing, so of course that puts pressure on other kinds of revenue,” Edgington said.

According to the Center for Budget and Policy Priorities in 2017, Texas’ funding for public universities is 17.7 percent lower than they were prior to the recession in 2008. Although donations do not go toward expenses such as faculty salaries, the police department budget or maintenance, a decrease could affect the creation of new endowments, graduate fellowships, and research budgets. Both Edgington and Terry Pankratz, vice president of Budget and Finance, agree that the impacts of the tax bill won’t be seen until two years from now.

“It’s a little soon to know how (the standard deduction) will impact us … many of those who are making those routine donations to us, they have a strong affinity to the university, so I don’t think they’re making those donations necessarily for tax purposes, although that certainly could be the reason,” he said.

In an effort to study the effect sooner, the Office of Development and Alumni Relations is considering gauging people who donate annual amounts under $500.

“I would like to survey our donors … A sampling of donors who have consistently given to UTD at an annual gift level of say, $500 a year for the past 10 years, and ask them, ‘How might this influence your decisions?’ and if it’s an overwhelming response, we will need to adjust how we communicate the importance of their giving,” Edgington said.

Edgington and Pankratz want at least two years of data before ruling on the effects of the bill, but Edgington said in the meantime, the university must be proactive in its efforts to recruit new donors and keep existing ones.

“Philanthropy is a bedrock of our society and the desire for others to support causes that they believe in, I believe is stronger than incremental changes to a tax code,” Edgington said.