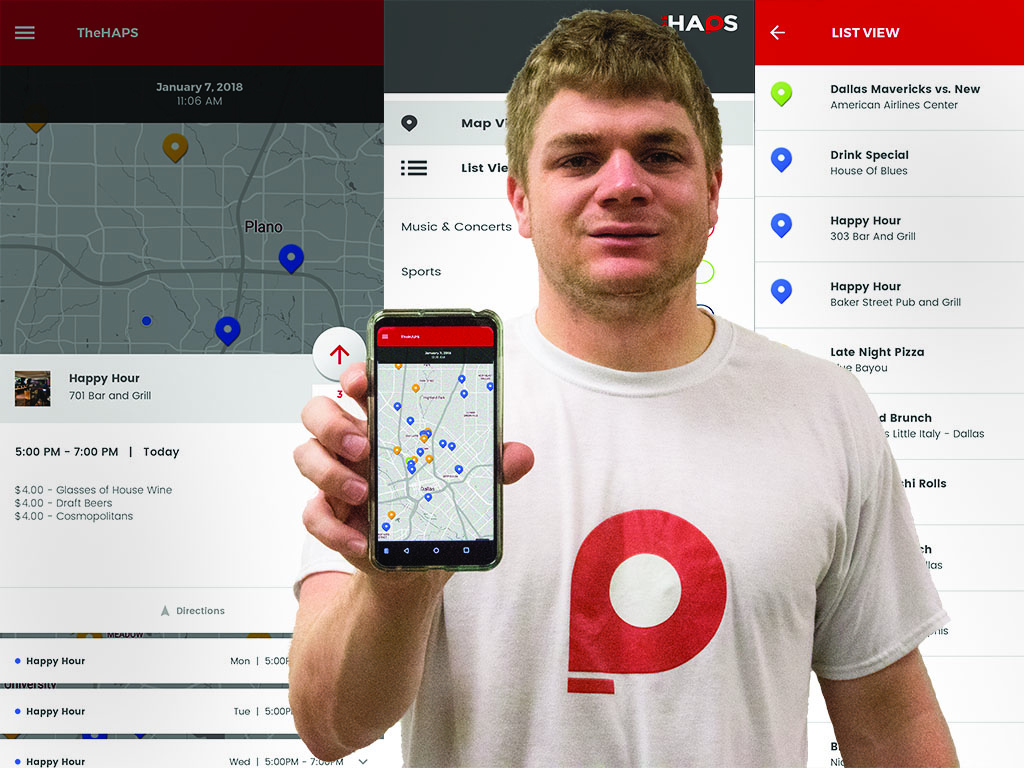 A UTD student partnered with a friend to create an app that keeps track of nearby live events, open restaurants and entertainment centers.

The app, called TheHAPS, shows different events occurring in the city and useful information, such as user-made hashtags, live reviews and the ability to post on Twitter from the app. Events such as music and concerts or sporting events are color-coded for future reference, and users can view what they are interested in on the app.

Christopher Curry, an MBA student, and his partner Andrew Telkamp, who works at a digital market firm with his family, came up with the idea of the app two years ago on a trip to Colorado. While they planned to attend different events, such as a basketball game and going skiing, the pair didn’t have much else to do and stayed in the hotel most of the time. On their way back from the trip, they found out that they missed out on some concerts and other events because they didn’t know about them until later.

“I went to all these different websites and places like Yelp and Google, and I had to go to each individual business’ website in order to see what they had upcoming or go to their Facebook page,” Curry said. “That’s where it hit me that there’s really no one app that you can click on and see everything around you at any given time.”

Curry and Telkamp soon learned how to write code and program, which would help them later in the development of TheHAPS. It took eight months to create the app, which was released October 2017. During the development, Curry and Telkamp received feedback from users and their clients, helping them improve the app. TheHAPS was named after the phrase “the happenings,” referring to the app’s ability to show what’s happening around a person in real time.

Curry said he and his partner faced challenges marketing the app and getting their name known in the DFW area. As they created the app, Curry and his partner did research in market-research studies and general marketing to learn skills and help spread the word about their creation.

“In order to get everyone in the area to know what you’re doing it takes a lot of time and it takes a lot of patience,” Curry said. “I’ve gone into these places and was kicked out the door right away. Then, going back to the same place after they’d heard about it, then it was a different situation.”

“I personally think the app is a good idea, and it’s something that’s needed,” Young said. “People want to know what’s going on in real time and kind of compare against different doors around town.”

Curry said the app is useful because it gives people connections with the businesses around them. The app was engineered differently from apps such as Google Maps and Yelp because of its ability to show surrounding events in real-time with constant updates.

“I’ve shown this to a lot of people and they didn’t even know that Shady’s Burger’s existed, and it’s just right down the road,” Curry said. “I think it’s a useful tool, especially for college students (who) are looking to save money on food and drinks, who like to go out at night and all.”

The partners’ startup was featured in Dallas Innovates magazine, DevPost, Launch DFW and other start-up scenes. Curry said the team continues to advertise about the app through social media and word of mouth. In the future, he and his partner are looking to develop and refine the app further.

“We’re really focused on this platform, we have quite a few updates coming up that’s going to make it a lot more interactive, it’s definitely going to be a lot more user-friendly,” he said.