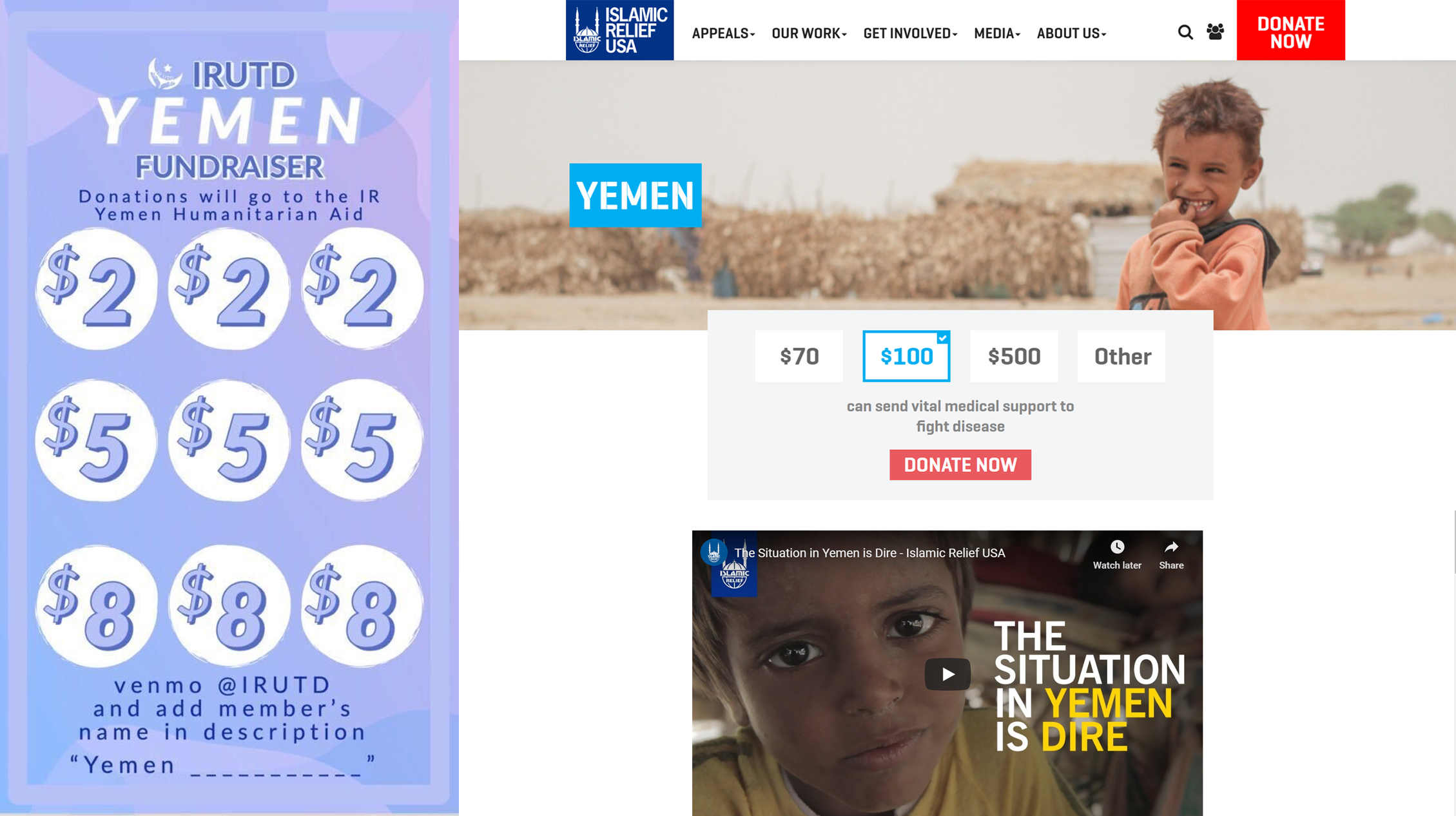 Dubbed by the UN as the ‘world’s largest humanitarian crisis,’ the current situation in Yemen has spurred on-campus groups to fundraise for relief efforts.

During the Arab Spring in 2010, a wave of protests and uprising against regional dictators throughout the Middle East spread to Yemen. As a result, Ali Abdullah Saleh, first president of Yemen, was forced from office in 2011 after being accused of causing unemployment and government corruption. Abdrabbuh Mansour Hadi became the new president, but the transition to power failed due to widespread unemployment, food insecurity and a separatist movement in the south during his presidency. In 2015, the Houthi movement — rebels against the standing government — took advantage of the weakened president and appointed a presidential council to replace Hadi, who fled to Saudi Arabia.

EPPS professor Clint Peinhardt described the war not only as a civil war, but also a proxy war. Saudi Arabia was fearful of the potential Iranian influence and support for the Houthis, and launched their own military campaign to restore Hadi’s government. The United States has aided Saudi Arabia by refueling warplanes and sharing intelligence. There is still ongoing conflict.

“What should the world do about wars, about civil wars in particular?” Peinhardt said. “If you have parties within a country fighting other, usually one of them is kind of the government and then one’s a rebel group. It’s tough for an outside force to come in to resolve a conflict. What you’ve seen is kind of just stasis in the world. There hasn’t been a lot of change in this war in the last couple of years. Unfortunately, what that’s meant is that the world is more or less forgotten about Yemen.”

A byproduct of that war has been 24 million people needing assistance from preventable causes. Yemen has experienced the largest cholera outbreak ever recorded, and about 2 million children are malnourished.

“One of the likely consequences in any civil war is that disease becomes more common,” Peinhardt said. “The hospitals are being bombed, and doctors and nurses are trying to flee the country. Everything just deteriorates, and that’s definitely happening there. The United Nations or United States Agency for International Development have cut their operations there because of the war or the COVID crisis or both together. There are probably very few places on earth that are worse right now in terms of just trying to survive.”

Peinhardt said the dominant mode of foreign aid is bilateral, or country-to-country aid, and USAID was giving money directly to the Yemeni government and operations on the ground. However, aid has been weaponized in the past, making it difficult for civilians to get the necessary resources.

“The average civil war reduces the size of the overall economy by about 15% total,” Peinhardt said. “That may not sound like a huge number, but it’s also preventing it from growing. So you start at level 100, and after a civil war, five years later, the country has not only not grown, but it’s now doing worse than it was before destruction of lots of infrastructure. It’s a pretty terrible economic effect.”

He said that nonprofit organizations may have operations on the ground or may have partner organizations that are there; Doctors Without Borders, for instance, tends to be politically neutral everywhere, so they can go into situations like this and give aid to either side because they very rarely take a political stance on anything.

“In some ways, humanitarian and nongovernmental organizations are the first responders and they’re almost the only ways if you want to do something about the Yemeni crisis, which is what I imagined that IRUTD (Islamic Relief USA at UTD) is feeling that,” Peinhardt said. “There’s really not another way to channel resources other than those NGOs. I mean, you could ask your government to care about it more and maybe they’ll be responsive, but if you, as an individual, want to do something, then those are really the only real channels for you unless you have a lot of political hold.”

Marketing junior and IRUTD member Sadaf Islam said that the issue resonated with him because the Yemen crisis requires immediate action or else the entire population would be eradicated. IRUTD donated to Islamic Relief USA which focuses on nutrition for women and children, improving quality of water and sanitation sources and distributing medical resources. IRUSA has served over 580,000 people and implemented 25 projects in Yemen.

“IRUSA is one of the largest organizations in terms of doing humanitarian work around the world,” Islam said. “They work with every humanitarian crisis, along with any emergency crisis — such as the Syrian emergency or the coronavirus emergencies — which have been unprecedented. They improve the day-to-day lives of people who desperately need it not just when their most desperate, but also throughout the long haul and the entire process.”

IRUTD’s fundraiser lasted for six days and rotated the number of volunteers who would post donation bingo boards on the group’s social media page. Approximately 15 members were involved, including the board members, and Islam said well over a few hundred people donated, for a total of $8,500 in raised funds.

“We made bingo boards, and each board completed is $45,” Islam said. “We initially just asked our members to go out on their social media and encourage people to donate. We filled them with $8, $5 and $2. We were like ‘These are really small amounts. This is something that college student can easily give up a cup of coffee for.’ That was our original target demographic that still is our target demographic, trying to ask the college students to help out whatever they can.”

The fundraiser later expanded outside of IRUTD to the Bengali student organization of UTD, Pakistani Student association of UTD, and Alpha Lambda Mu of UTD and UT Austin.

Similar to IRUTD, Ahlul Bayt Student Association (ABSA) used Instagram and bingo boards to raise money over $1,300 for the crisis. ABSA will be donating to the Zahra Trust which provides medical aid, clean drinking water and seasonal aid to Yemen. Zoha Rizvi, neuroscience sophomore and ABSA member, said they chose the Zahra Trust for a variety of reasons, including the fact that it’s been working in Yemen for several years.

“It’s not just handing money to like a group of people there,” Rizvi said. “They facilitate where that money goes. They’re really hands-on, which is what we really liked about the Zahra Trust, and they provide nutritious food, medical assistance and shelter.”

Rizvi said the officers created the virtual bingo boards, posted them on their Instagram stories and that, in total, approximately 55 to 65 people donated.

“Some officers ended up getting a lot of bingo cards,” she said. “Some got two or three, and one of our officers got more than 10 boards filled. It was crazy. We weren’t really expecting to get that much money, but we’re really happy that we’re able to donate like a good amount.”

She said it’s crucial to not forget about Yemen, and to remain consistent in donating or signing petitions.

“It’s important not to just leave it in the back,” Rizvi said. “We have to be active and try to implement at least some sort of change until we solve this big crisis.”

The birth of VENUS