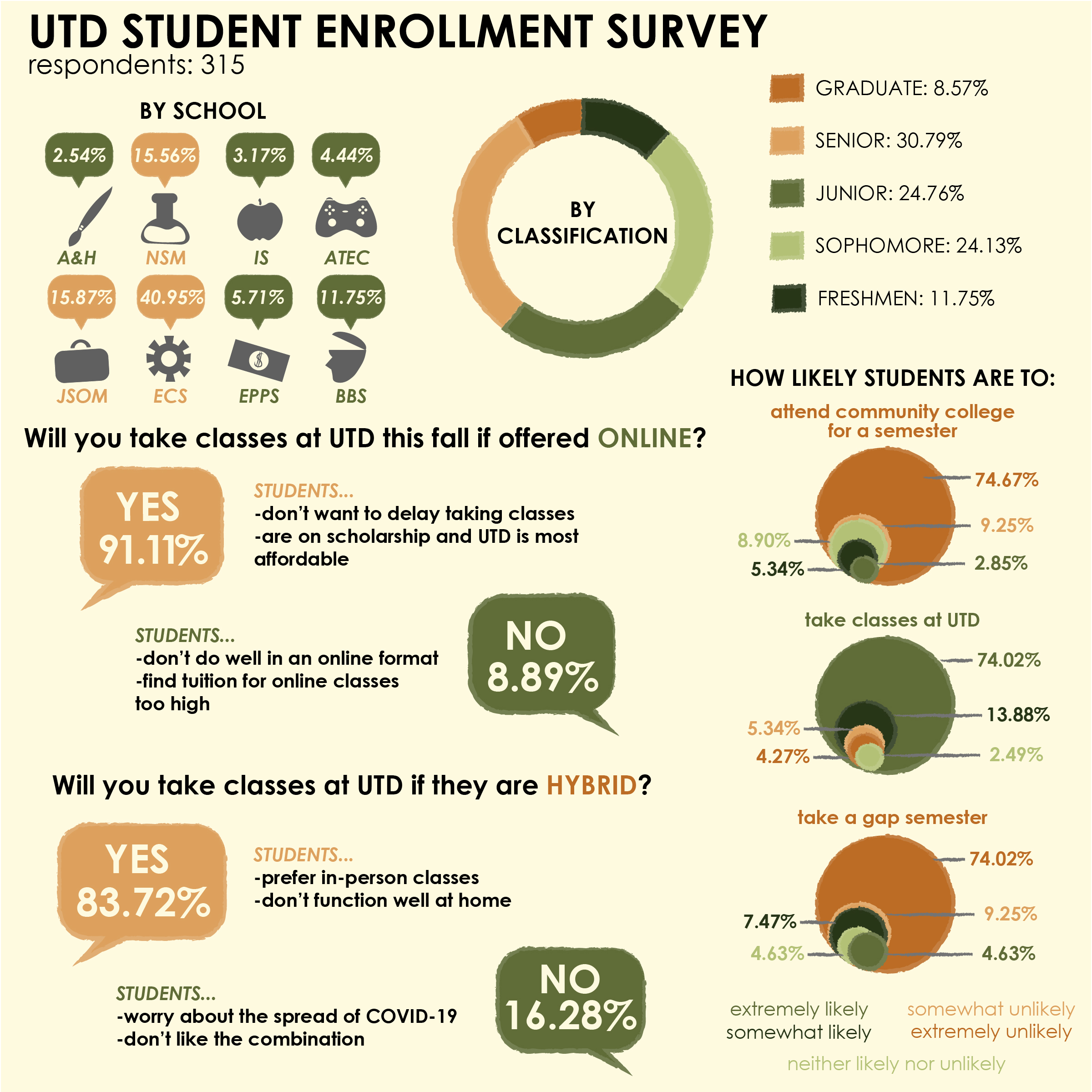 For various students, changes and uncertainty about fall 2020 campus functionality brings up many unforeseen issues including financial problems and difficulty performing well in studies.

In a survey conducted by The Mercury, 9% of respondents said they would not be willing to stay enrolled at UTD if the upcoming semester was online, primarily citing reasons such as high tuition costs and not being able to perform well in an online format. Similarly, 16% of respondents said they would not stay enrolled if UTD were to go hybrid, the most common reasons cited that they are worried about the spread of COVID-19, and don’t like the combination of in-person and online learning.

Though UTD is planning on offering five different course modalities this upcoming fall — including hybrid classes — ATEC production and design senior Nishant Kelkar is fairly certain he won’t return to campus unless it is fully functional.

“If fall goes online completely, I’ve been discussing with my parents,” Kelkar said. “They gave me the option and said, ‘maybe you can go with community college or take a gap semester and get a job instead,’ because I was telling them I didn’t like the online school in the spring and now summer.”

For Kelkar, much of his decision stems from a dislike of the virtual learning experience and a feeling of disconnection with online instruction. He said that if his online spring classes had been better structured and streamlined, with professors having a standardized way of teaching — rather than using multiple platforms such as Zoom, Webex, Teams or Blackboard — he would have been more receptive to online instruction.

“It’s a little annoying that you don’t get the face-to-face contact, which is not as good of a learning experience,” Kelkar said. “This (taking a gap semester) is a better alternative. It would give me a break from college, allow me to focus on other things in my life, focus on my career and what exactly am I looking for. I would look for internships or jobs, save up money on the side, and come back to finish my degree after.”

Kelkar discussed a class he wanted to take this fall called Interaction Design, which he believes would not be worth taking unless it was in-person.

“I’ve been excited to take this class,” he said. “I want to take it in person because I want to get the most out of it and learn about this new technology and software. I’ve been yearning to learn about it, but online won’t give me as much of a positive learning experience because if I’m learning a new program, it’s a bit of a communication barrier due to lack of a face-to-face, in-person lecture.”

Aside from his personal feelings about the effectiveness of going online, Kelkar said there are other factors that motivate his decision to avoid online instruction.

“Partly it’s financial,” Kelkar said. “Because you’re still paying for the classes but you don’t have access to all of the facilities: gym, career counseling, food services, wellness centers. The things on campus outside of classes that may not be accessible even though you’re paying for them. You’re just not getting the full college experience, so there’s no point paying for it.”

Biochemistry junior Umar Abdul-Qadir said that UTD’s execution of online classes could use some improvement, based on his own experiences with online learning during this past spring semester. However, in contrast to Kelkar, he still plans on taking UTD’s online option for fall.

“This past spring everyone was trying to figure what to do while also teach and learn,” Abdul-Qadir said. “So the mess was understandable. But I think now the teachers will have had a little more time to get used to the system.”

He said that in general, the risk of infection on campus is much more than that of his own home, and he also wanted to avoid the discomfort of wearing a mask for five to six hours a day.

“I was thinking of taking a gap semester, but then I thought I wouldn’t really be doing anything at home,” Abdul-Qadir said. “As for taking it at UTD as opposed to community college, since I’m entering my junior year, I’m taking higher level classes than, say, freshman or sophomore year when I was still taking a bunch of core classes and stuff that could be taken easily at community college.”

With the recent spikes in Texas COVID-19 cases, administration has cited the need for course flexibility to be able to transition all classes fully online again if necessary.

“Four students have already been positive on campus,” Kelkar said. “A lot of cases are rising in Texas again, so who knows what could happen?”

Remote Learning: the benefits, the drawbacks