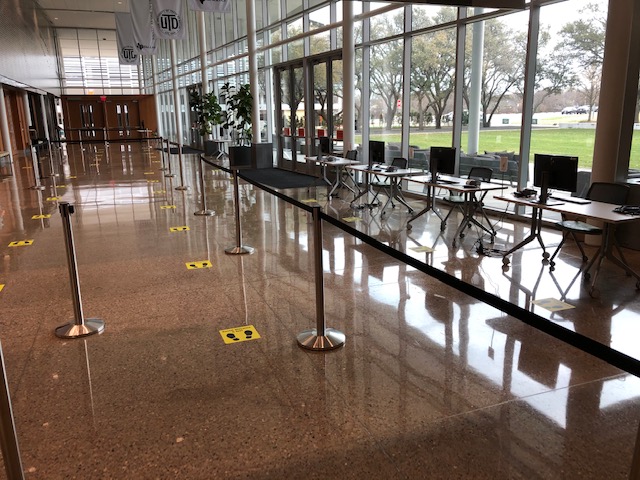 EMTs can work two four-and-a-half-hour shifts per day, either as medical standby or vaccinators.

UEMR Captain Elizabeth Helfrich – who started the Community Health Initiative – said the program allows registered EMTs in the UTD community, both affiliated and unaffiliated with UEMR, to volunteer at the vaccine site. Helfrich said EMTs at the site provide medical standbys (emergency medical assistance) and administer COVID-19 vaccines. There are currently 47 student EMTs volunteering through the initiative.

Helfrich said that she started recruiting volunteers early this semester when administration reached out to UEMR for assistance at the vaccine site. After the site shifted to being run by student workers, EMTs began assisting with vaccination efforts as well.

“Vaccination was something many EMTs were very enthusiastic and passionate about and we had the infrastructure from the COVID testing,” Helfrich said.

“The trainings were rigorous and prepared us for our tasks,” said neuroscience senior and EMT volunteer Patrick Nnoromele. “I really decided to join because I knew that I had the qualifications to help people, and I knew I had the time and I wanted to be a part of the solution, you know? Help COVID-19 come to a quicker end.”

Helfrich said EMTs can work two four-and-a-half-hour shifts per day, either as medical standby or vaccinators. For the former, EMTs will usually get two to three medical emergencies per day. If a patient has an adverse reaction after getting vaccinated, EMTs will take their vitals and stabilize any life threats while dispatching the UEMR 911 crew. The UEMR 911 crew will then take another set of vitals, and – based on the vital sign trends and the patient’s wishes – choose to contact the Richardson Fire Department if the reaction is severe enough.

“Most of the standbys I’ve done, those are because people have different needle phobias and anxieties,” Nnoromele said. “Some will pass out, throw up, not so much because of the vaccine itself, but because of the needle.”

Nnoromele said that vaccinator shifts are more interactive – and rewarding. At the start of his shift, he logs into UT Southwestern’s patient system to see how many patients he will have that day and prepares vaccine vials containing either the Moderna or Pfizer vaccine before vaccinating patients. Whereas Nnoromele typically only intervenes with two or three patients during his medical standby shifts, he says he may vaccinate hundreds of patients during a vaccinator shift.

“It’s a little bit like speed dating, to be honest,” Nnoromele said. “Every two minutes I’m meeting a complete stranger and I get to learn about their life story. And I get to contribute to their life story in a very tangible way. I know some of those people’s lives will be saved with this vaccine, so that adds a lot of value to what I’m doing.”

Helfrich said that EMTs in the Community Health Initiative will likely be expected to help at the vaccine site until July.

“The coolest thing is that this all started as an idea of ‘we don’t really have enough people to fill these shifts,’” Helfrich said. “We sent out to get ten EMTs that weren’t already in UEMR and ended up with 47. That to me says a lot about the type of people that are at UTD: (that if) there’s a need, they step up to the plate and they want to help.”