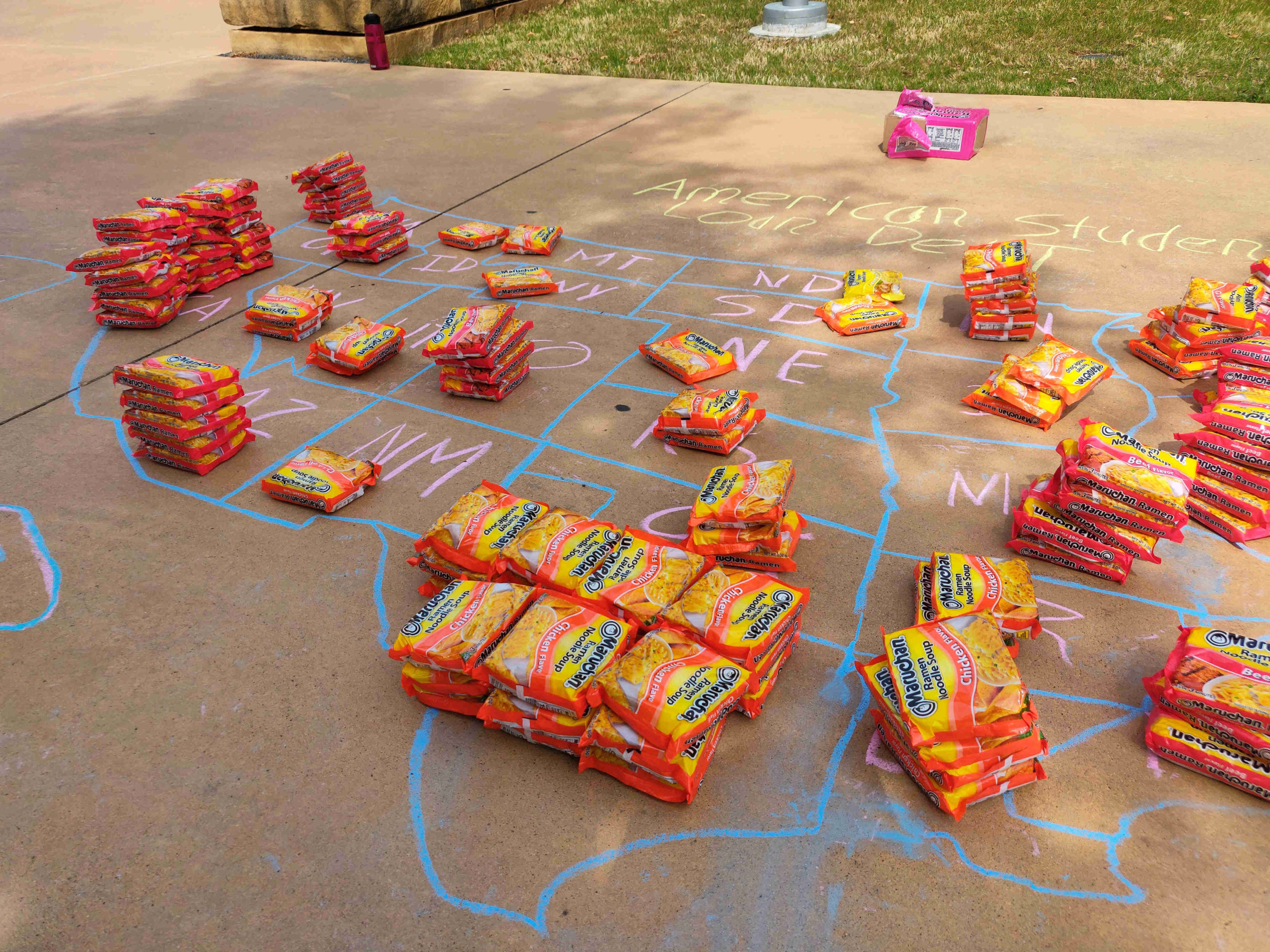 An artistic representation of America's student debt, fittingly made with ramen. | Photo courtesy of Erin Bray

ATEC senior Erin Bray kneels on the Texas Instruments Plaza pavement, etching a chalk outline of America onto the concrete while grabbing stacks of Maruchan ramen to assemble. They stand there for hours talking to passersby about the 250 packages of chicken, shrimp and beef ramen they’ve dumped onto America to represent the country’s $1.7 trillion in student loan debt.

At the end of April, Bray took to the sidewalk to make their artistic statement on the jarring debt of student loan borrowers in America. Months later, the topic of Bray’s art remains pressing among students, especially as they start to wonder how they will pay for the upcoming fall semester and how the Biden administration will handle debt forgiveness moving forward.

Bray said the unacceptable reality of student loan debt is what compelled them to head over to TI Plaza and lay down their art. When planning to visualize the debt, Bray coordinated the flavors and number of ramen packs – which they said was fitting symbolism for college students – in each state to match the number of loan borrowers and the debt they owed. Each ramen pack represented 169,000 students, and each flavor represented a debt range.

“In terms of America, we’re not doing bad, [but] if you measure [that] against any other country in the world, it’s horrifying,” Bray said.

Since Bray made their art, the Biden administration enacted the Borrower Defense to Repayment program – initially established in 2016 by the Obama administration – forgiving about $56 million in debt for around 1,800 borrowers. The program, however, has limitations: it’s only applicable towards students who were defrauded by their university and can only forgive direct federal loans. Consequently, the majority of student loan borrowers in America, including UTD’s in-state, out-of-state and international students, aren’t eligible for loan forgiveness.

Bray said the Biden administration’s ineffective loan forgiveness policy – and the government’s norm of passing ineffective loan policies – will negatively impact this generation of students’ personal lives, just as they have been in the past. Among the consequences, Bray said loan debt puts a caveat in students’ pursual of the “American Dream” – that is, those in debt likely cannot afford the risk of entrepreneurship and starting families, both of which are costly.

“I think this is one of the areas where America is just refusing to learn from other countries,” Bray said. “There’s lots of areas where we kind of have this idea of American exceptionalism and our system must be best. But in a lot of European nations, student loan debt, especially in the late tens or hundreds of thousands of dollars, isn’t a thing because they just offer free college. Obviously, that does come with caveats – they limit who can get into college more so than we do here, and their colleges don’t have as many amenities as we do in America. But I think in terms of not burdening people with student loan debt for the rest of their life, they are definitely acceptable sacrifices.”

While getting rid of the ramen packs will take time and change on the part of the Biden administration, Bray said they hope their art will spark conversation on student loan debt between students.

“If [student loan debt] is something that speaks to you, and you specifically want to make a difference there, you should get informed,” Bray said. “Learn more about it and find ways to get involved in lobbying efforts. Even if it’s on a small scale, our efforts might just yield a little bit of change.”