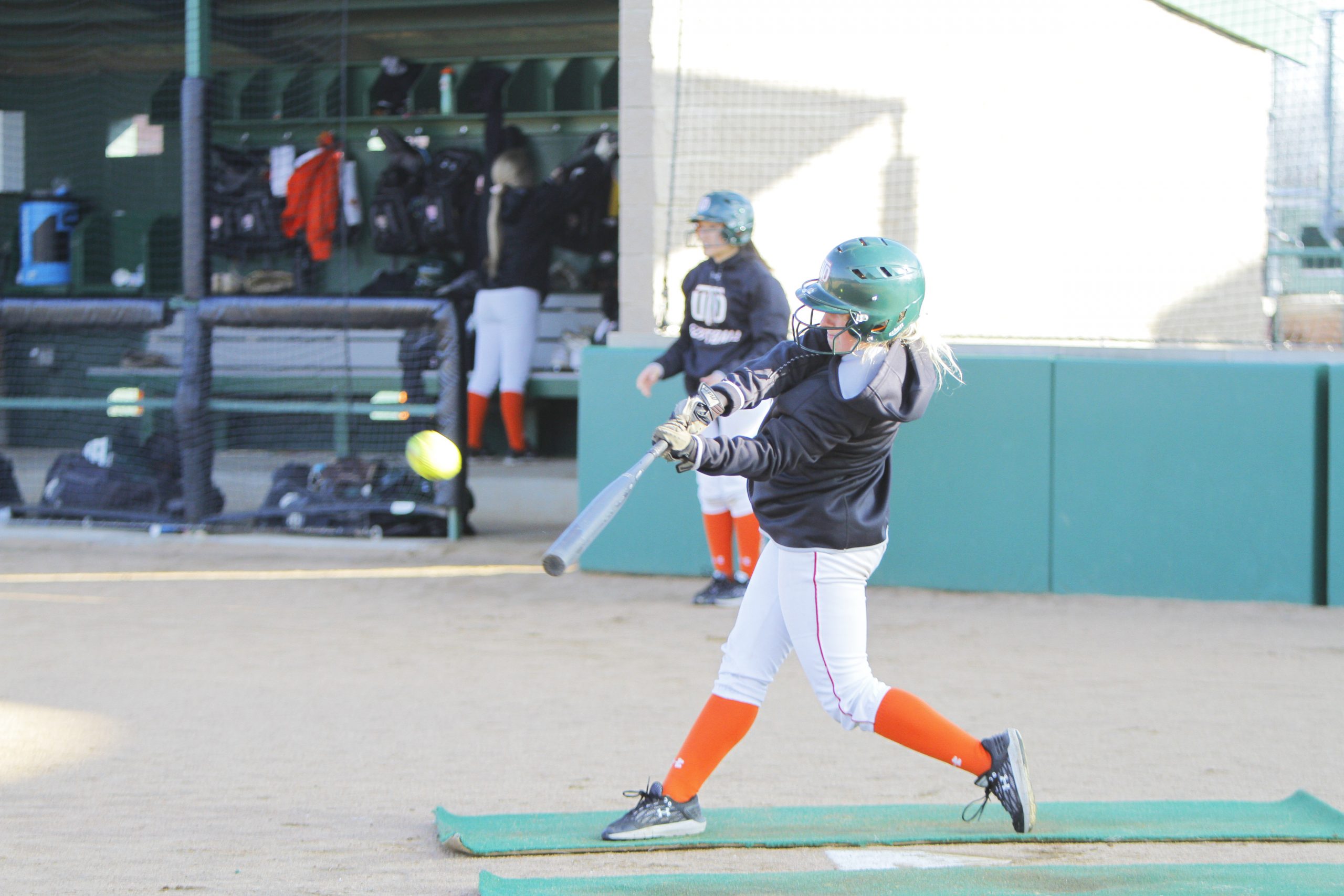 The UTD softball team was unable to train as a team during the fall due to NCAA regulations, but were able to fit in about 12-18 hours of practice per week since January. Photo by Roshan Khichi | Mercury Staff

The UTD softball season is in full swing after the team’s first conference match against Hardin-Simmons. With three conference games under their belt and six more in the near future, the players have their sights set on the ASC Championship Tournament.

The Comets trained for three weeks before their season began, practicing between 12-18 hours per week. Head softball coach James Kling said maintaining a similar practice routine would help bring order to the team.

“My philosophy as a coach is that you try to create a culture, and you try to create the same things to do so that the girls are used to the practice, to the regimen that we go through,” Kling said. “So you’re not changing it up every once in a while just to throw some new things in there. But for the most part I try to keep everything the same so that they know what to expect. They know, going into the practice, what we’ll be doing and they’re able to work hard at it.”

Due to NCAA regulations, the Comets, as well as all other teams in their division, weren’t allowed to practice as a team in the fall. With such a long stretch of time being unavailable for official practice, Kling said it was important to see his seniors step up and encourage the team to practice on their own outside of the official schedule.

“I don’t name captains on my team because I want everybody to be a group and I don’t want there to be a few people up here that are captains, but I expect my seniors to lead by example,” Kling said. “(I expect them to) verbally lead outside the softball field, to make sure that the underclassmen are understanding the ways that it needs to be done at UTD.”

Senior utility Jessica Vlasek had a batting average of 0.317 last season along with a fielding percentage of 0.991. She hit a season high of 13 assists playing against Howard-Payne in March last year and recently got an RBI double at a Feb. 9 match against Centenary, helping secure the team’s first win of the season. With important players graduating every year, she said every player needs to be ready to fill positions in which they may be inexperienced.

“It’s hard to fill anyone else’s shoes. I think we have a lot of us who have struggled with that, especially since we lost players and people having to play positions that they’re not necessarily comfortable with,” Vlasek said. “Even if you haven’t played that position, you just kind of have to step up and try it and let the rest of your teammates know that you might be doing something you’ve never done before and it’s going to be okay.”

At this time last season, the team had a 3-3 overall record with a 2-3 conference record. They went on to finish the season 17-21 overall and 12-14 for conference games. The team currently has a 3-8 overall record with 1-2 for conference games, but they’ll have a chance to turn things around in the coming weeks. The season began with a 1-3 weekend against Centenary and MHB, but Vlasek said the team was optimistic, taking the games in stride as a learning experience for everyone. Seeing the team play another team for the first time, she said they were excited to see players step up.

“We have some little girls on our team — and I say little but I mean short and little girls under 110 pounds — they are absolute ballers and that definitely shocked me,” Vlasek said. “Sports are interesting in (that) it doesn’t really sometimes matter about physicality and look. You can come out here and play your own game.”

The opening weekends were close matches, with each of the Comets’ losses having come out to a difference of one to two points. Besides showing them where they needed to improve, biology senior and outfielder Elizabeth Brann said that the matches gave the team the confidence to succeed throughout the rest of the season.

“If anything, I think that propels us, gives us a little confidence that we can play with people that are really good, and we are a good team in ourselves,” Brann said. “We are young. We are new. I think we have eight new people on our team, so it gives them confidence too that we can play with anybody. We were one hit away every single game though to winning each game.”

Since winning the ASC championship in 2017, the team faced the challenge of changing their head coach on a yearly basis. Now entering his second year with UTD, head coach James Kling said returning would be important to bringing stability to the team.

“I think they’re getting used to the way that I do things… so I think things have settled down some. I think they understand,” Kling said. “We want to win that conference championship. We want to get to the national tournament. But early on, we’ve got to find out where we’re at as a team. So, consistency is the key. It creates a good culture and it lets them know exactly where they stand”

Coach Kling’s second year at UTD marks the first return of a head coach to the Comets since the departure of Rich Wieligman following the team’s 2017 win. Despite the difficulty of learning each new coaches’ style, Brann said it had taught them to adapt to and work with all kinds of people.

“Going in, we thought it was going to be consistent. Our freshman year coach, we thought was going to stay with us throughout, and that didn’t happen and we kind of had to adapt,” Brann said. “Every year kind of seems like a tryout. Every year you have to prove yourself to a different coach, and so this year, having the second year with Kling, we know what he’s going to expect. We know how to play the way he wants us to play and stuff like that. So the communication is a little bit better just because now we understand where he’s coming from and he understands where we’re coming from.”

The players will face Howard Payne in their upcoming conference games, a team they beat 8-1 at last season’s ASC Championship tournament. With their first conference game behind them, senior utility Kynsee Gesch said focusing on the fundamentals would help the team succeed.