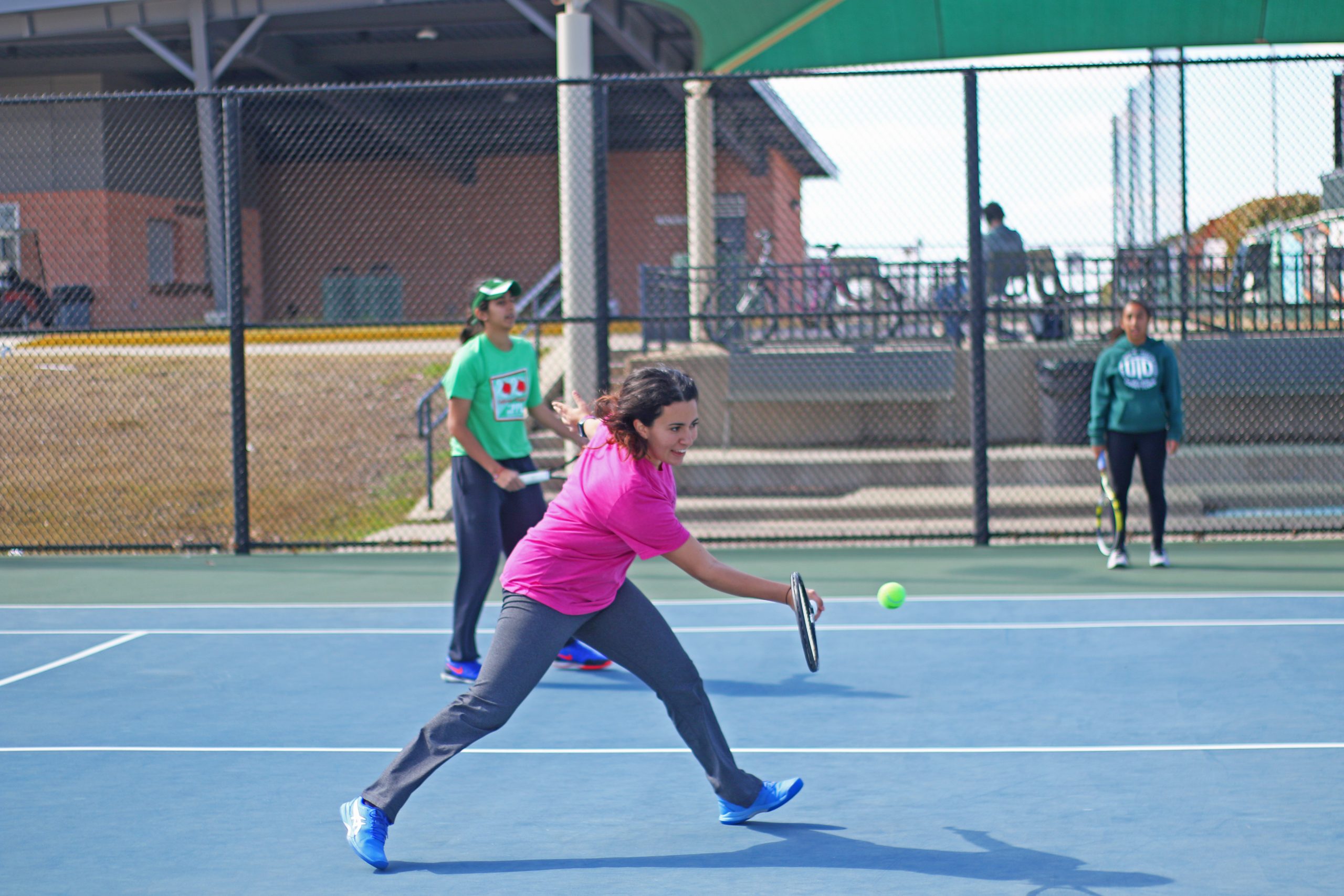 The women's tennis team wasn't able to practice as much due to poor weather conditions in the past month. Photo by Esther Mathew | Mercury Staff

The UTD women’s tennis team season is only a small part into their season and has many games ahead of them, but with the prospect of being repeat conference champs, the end of the season couldn’t come sooner enough.

The team played against Southeastern Oklahoma on Feb. 7, where they lost 6-3, and Collin College on Feb. 8, which was an exhibition match. Their upcoming game on March 1 against fellow ASC East conference competitors, the Ozarks, will be important for rankings in the postseason. Every match against a team that’s not in the division has the sole purpose of getting us ready to play the ASC East teams, said Bryan Whitt, coach of the women’s and men’s tennis teams.

Whitt has been a coach at UTD since 2004 and has played tennis for 40 years. Yet for him, every season is different, this season included.

“Being defending champs changes the dynamic of everything,” Whitt said. “We were voted preseason number one, for men and women, to win the East. So that adds a little bit of pressure, adds a little bit of expectation that we might have had, but nobody else had necessarily for us in years past. So it’ll be interesting to see how our teams handle that.”

One player who already is aware of this pressure is junior Laila Kamel, who transferred from UT Austin to UTD this past semester. Although she had played club tennis previously, this is her first season officially playing for a college team.

“Expectations are set pretty high for us to compete well during conference,” she said. “Everyone knows that and is aspiring towards that. I think our goal is just maintaining the good team dynamic we have going on right now, keeping up with that.”

As a student athlete, each player has had to find a good balance between school, work and sports, which takes time to figure out. Regardless, the players enjoy their game, which is why they keep playing after all these years, Kamel said.

“Even being able to be on the team is a privilege, really, to have that time to put towards it,” Kamel said.

With only two games under their belt and a large part of their practices cancelled due to the bad weather, the women’s team has not been able to be on the courts as much as they would like, Whitt said. Senior Kathy Joseph said she has bittersweet feelings about playing for her last year.

“I love competing,” Joseph said. “Every game, you can use a different strategy. I love playing different people and seeing how different people play the same game differently. With tennis, even if you’ve lost a few games, you’re still in the match. You can come back at any point, so I love how exciting it is in that the game is never over until the last point.”

Although the team has the group goal of defending their conference champion title, athletes still maintain individual goals. Joseph, for example, is aiming to make it to nationals with her doubles partner junior Samantha Wong. At the Intercollegiate Tennis Association Regionals last fall, the duo was undefeated up until the finals, where they lost 6-4, 6-2 to Trinity.

“I feel like tennis is an individual sport, because you go out there, you have to focus on your match first and try to win your own match,” Joseph said. “But then you focus on supporting the team. Really when you win your match, you’re not doing it for yourself, because your team has to win together.”

Wong transferred from University of Arkansas where she played Division II tennis, so she’s used to the grind of preparation.

“We’re trying to practice every day, the weather doesn’t necessarily permit it,” Wong said. “But we’ve been practicing and training with weights, to try to keep us in shape.”

During practices the team as a whole requires discipline, but during matches the coach lets the players figure out their own strategies to beat their opponent, Wong said.

The team currently has no wins and one loss, as opposed to having one win and no losses at the same time last season. That being said, it’s still early in the season; regardless of how the team’s next couple of matches go, there is still plenty of time for the players to adjust and prepare for the postseason.

“In this business, you get a pretty quick answer on whether you’re doing it right or not,” Whitt said. “You win or lose and you get to work and improve towards changing those results, to some degree.”