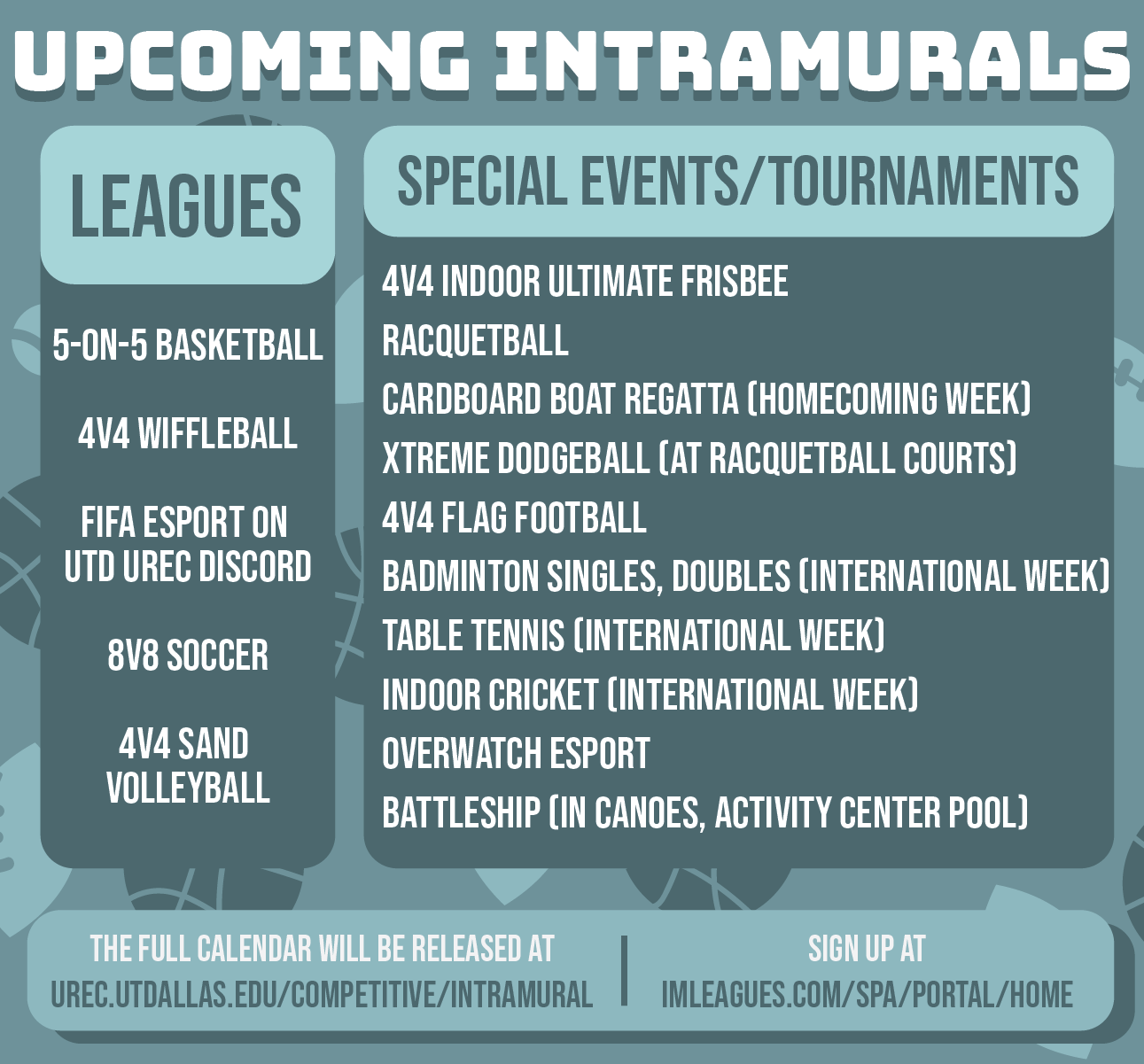 After a semester of limited operations, intramural sports will return to full force for the spring semester with a lineup that includes basketball, FIFA and wiffleball leagues as well as special events like table tennis, Overwatch and a version of Battleship played on canoes in the AC pool.

Ben Piper, associate director of programs for UREC, said that the biggest change from the fall is that basketball and soccer, the two primary leagues, will be back in their full formats — a five-week regular season and two-week playoff. Piper is also working to bring more of the one- and two-day tournaments and special events, which he said were popular during the fall semester.

“You always run into things like weather if we’re working outside, or sometimes life happens across campus and we have to make adjustments,” Piper said. “But I think the students, in those situations where we had that scenario happen, they stuck around. They were, I think, a lot of times just happy to be able to participate and have that camaraderie to compete or just try something new.”

Piper said that many of the changes that were made during the fall semester — such as running mini leagues for flag football and soccer — were implemented while his department worked to get staffing numbers back up to pre-COVID levels.

“Probably like anybody else on campus after we came back, [there were] issues with resources in terms of facility space or having the manpower to be able to do some things with your programs that you used to do or wanted to do wasn’t there — specifically staffing was an issue,” he said.

There was no one on staff to officiate at the start of the fall semester, and while the number has grown, UREC is still hiring more students. Piper said that officiating intramural sports can be a tough job since it requires thick skin, adaptability and the ability to learn the sport quickly. Recruiting was especially difficult this year since students haven’t had much visibility into the program in the last couple of years.

“There’s no one, single focus [to recruitment]; it’s kind of a compilation of things, but the easiest way if somebody’s interested is to reach out to us and we’ll set them up and go from there,” Piper said.

Since COVID-19 positivity and transmission rates on campus have remained low, Piper said he doesn’t anticipate needing to adjust the formats of intramurals, but his department is prepared to do so if necessary.

“The good news is, a lot of departments on campus and across the country are now in that mode where if we have to take a different approach based on some new information that’s come down, we’re pretty much ready to do that,” Piper said.

Registration for the intramural programs that occur early in the semester – including the basketball league – will open on Jan. 3. Specific schedules and registration information will be available on the IMLeagues website.

“We’re happy to get back to where we were before, and hopefully the students are and will show up coming off of that as well,” Piper said.