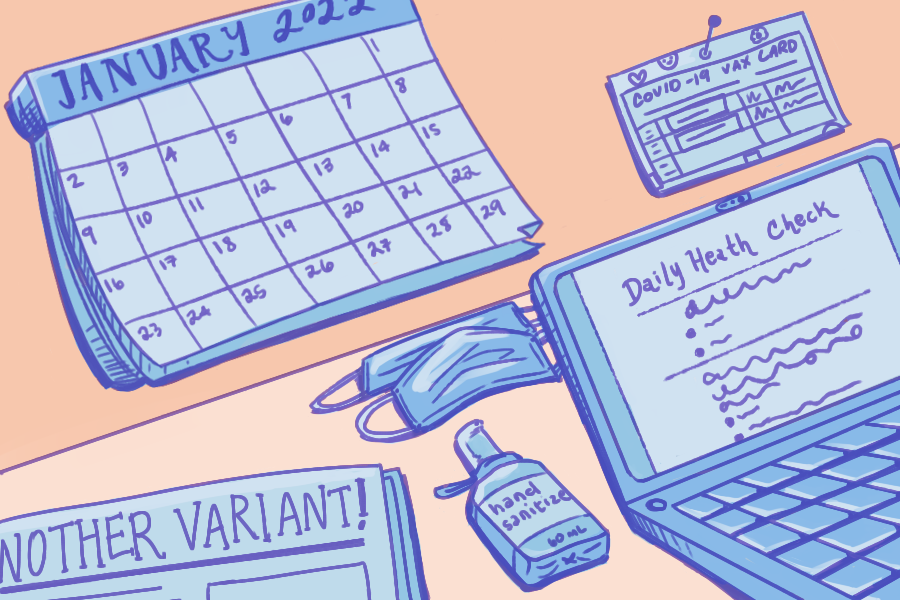 As finals conclude and students set their eyes on returning to campus next semester, UTD is doing the same with regard to its COVID-19 protocols.

By and large, Vice President and Chief of Staff Rafael Martín says that the current plan is to treat the spring semester as they had planned this fall before the Delta variant was introduced to the DFW area. This means that UTD will essentially return to the current status quo — full density in-person classes, Daily Health Checks, encouraged mask-wearing and random testing across campus — unless circumstances dramatically change over the next month. If positive trends continue into the spring as boosters become more accessible, the University may eventually return to “normal” operations.

“The plan right now — which, of course, big asterisk, is subject to change — is to come back full density just as we are now at the start of the spring semester,” Martín said. “We will obviously be monitoring local cases throughout the break, and if things start to take a turn for the worse, and especially if we start to see an increase in the number of cases within the community — we will ask people to continue to do the Daily Health Check throughout the winter break — that may affect our decision on how we start the spring semester.”

Unlike the last two semesters, UTD will not test every student upon their return to campus in the spring. However, Martín says that does not mean that the Proactive Testing Program is over just yet.

“We are going to continue the Daily Health Check and Proactive Testing Program through the start of the spring semester, definitely through January, and maybe longer if we think it’s warranted and we still have high levels of transmission in the North Texas area.”

While the same number of weekly tests will likely be administered in the spring — about 10% of the community — Martín said that the University is considering oversampling the portion of the community that has not registered its vaccination status in that pool, if community spread rates remain low.

“We know that they’re at higher risk,” Martín said, “both for contracting and transmitting COVID-19. We would probably still continue to test a smaller portion of the registered population, because it’s a much larger number, and we want to make sure that we are catching any breakthrough cases or spikes in that population. That’s one option about how we might tweak the Proactive Testing Program. But as of right now, the plan is just to kind of roll into the spring semester with a 10% sample of the whole population weekly.”

One other change that may be implemented is the introduction of seating charts to classrooms — an initiative that Martín credits Student Government with advocating for.

“[This semester] we could’ve saved ourselves a lot of time and labor if we had better seating charts in the classrooms for when we got a report in a classroom environment, to be able to identify who the close contacts were of the positive case and be able to target our resources much more efficiently. If you print out a blank form at the start of class, hand it out and have people fill in where they’re sitting — that then gives you a paper record faculty can retain if emergency management says, ‘Hey, there was a close contact in your class on this date.’ So, I’m going to be talking with the provost and the president about making that a mandatory protocol for the spring semester.”

On-campus quarantine housing will remain available for students who test positive or report symptoms and require accommodation. However, Martín said that there was a trend of students returning home for their quarantine period this semester rather than choosing to remain on campus. Accordingly, Associate Vice President of Student Affairs Matt Grief said there will be 10 housing units in CCHN — and 10 additional units in UV — reserved as quarantine residences. The peak occupancy this fall was 19 students quarantining on campus.

Since UTD released an update to the Voluntary Vaccine Report Form on Nov. 8, OEMCP reports that 15.29% of staff and faculty have reported receiving a vaccine booster, whereas only 2.29% of students have so far. That number will likely go up as boosters become more widely available. In fact, Martín said that the Student Health Center is currently working on establishing a system to deliver booster shots to eligible students on campus, but more information will be provided as the details are finalized.

“Overall, I feel like we have done a good job — not a perfect one, but a really good job — this semester. I credit that to the high vaccination rates we have on campus,” Martín said. “We’ve got to continue to be vigilant. We don’t know if Omicron is going to show up here, and if so, how effective vaccines will be, so we hope the community will continue to do everything we can to keep each other safe.”