skate fast, have a blast

UTD's skateboarder culture boasts an inclusive, supportive enviroment for those looking to join 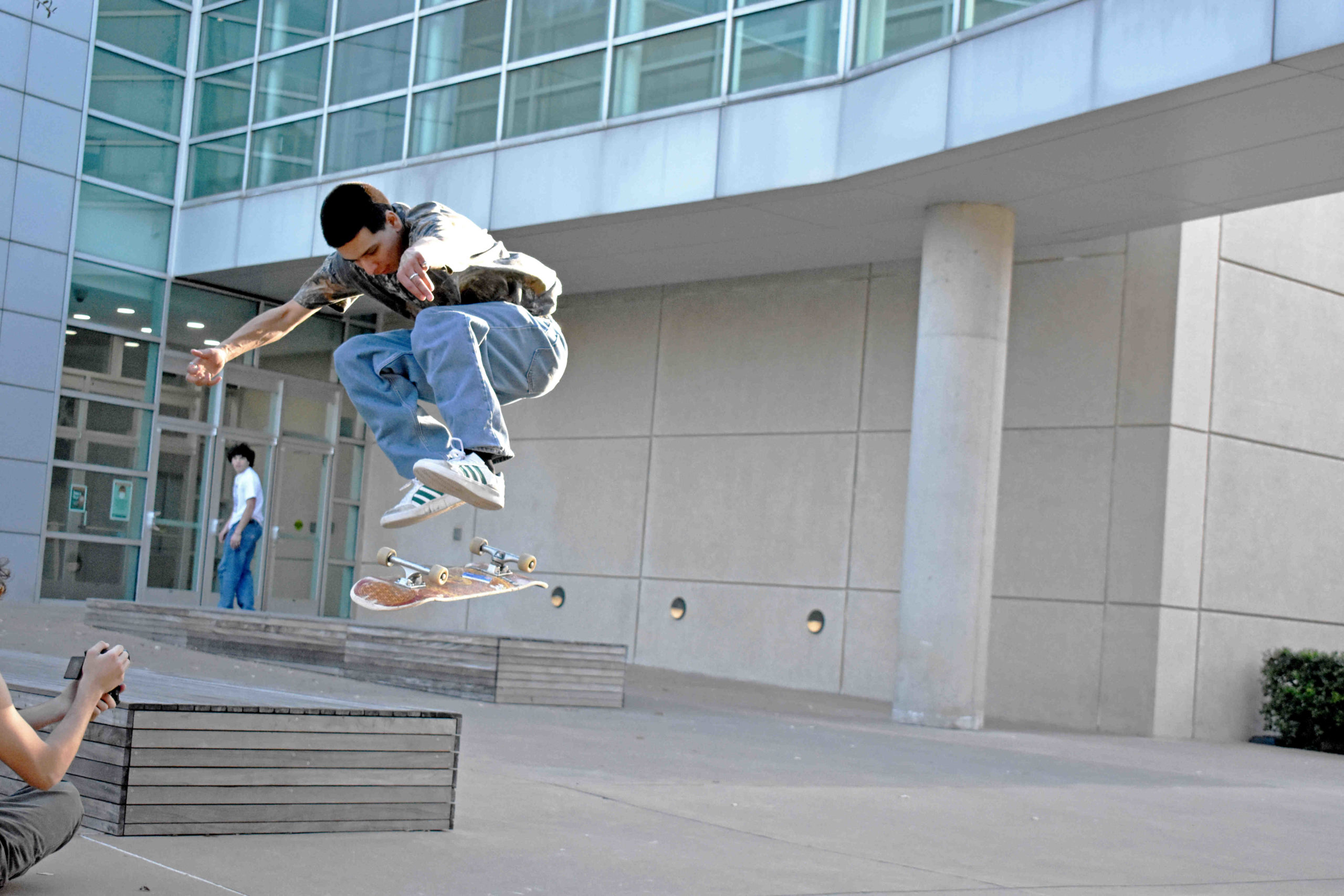 Computer science senior Nathan Breen glides past blossoming trees behind Green Hall, grinding a bench and trey-flipping the deck of his board as he rolls across smooth concrete. Now that spring is here, he and many other students have come out to get back into their favorite hobby: skating.

Breen has been rolling for 12 years. He first picked up a skateboard when he was 10 years old, riding on and off noncommittally. After the pandemic started, however, he found himself bringing his board to campus more frequently.

“There was just an urge to do it,” Breen said. “And after a while skating, I felt the need to go and [skate]. It pulled me in – I couldn’t not do it.”

Since he’s gotten back into skating, Breen said he’s done some introspection, examining why the activity is so captivating to him- aside from it being “a hell of a lot of fun.”

“One of the main things is it’s freeing have something to yourself,” Breen said. “It’s not a team thing where you need to work with other people to achieve a goal. You just pick your board up whenever you feel like it and improve on this thing that you like. Having control over this wooden board with four wheels is kind of dope.”

Even though skateboarding is an individual activity, Breen said he’s made a lot of friends through UTD’s skate community. Many of the skaters Breen’s befriended or observed often ride together outside of the Sciences Building, Green Hall, the SLC, ATEC, ECSW and ECSS – which are all sustainable areas for tricks such as ollies and grinds because of smooth concrete, bends and benches. There’s even an informal skateboarding GroupMe, with over 180 members, where trick skaters share videos and schedule times to meet up.

“So, many people are into the same thing and we all like to learn from each other,” Breen said. “The social aspect is really chill because everyone that you meet who skateboards is open. It doesn’t matter what your background is, everyone is there hanging out because they like to skateboard. We don’t care about your major, or race, or gender or whatever boxes people want to put you in- we’ll skate with you anyways. The only thing at hand is hanging out with your homies and having a good time.”

Rob Cahill, co-founder of the 4DWN Project – a skateboarding nonprofit based in South Dallas – and a first-generation street-skater, describes skateboarding as an inherently “alternative and out there” activity, accepting of all “weirdos.” Many of the features that attracted Breen to skateboarding, such as freedom, community and inclusivity are traits that Cahill said are ingrained in not only the Dallas skate community, but the nature of skateboarding itself.

“’Normal’ people – the police and most people that were better well-off, generally weren’t fond of street skaters,” Cahill said. “[Street] skating emerged as a way of rebellion against skate parks becoming inaccessible – it was born as this rebellious thing, and it continues to become even more and more rebellious. It’s inherently an ingenuity, bent on being progressive, freer and open to anyone.”

Even with skate culture’s intrinsically rebellious, progressive nature, Cahill acknowledges the obstacles it had to overcome in order to become a real community.

“One of the negative stereotypes of skaters … is that we’re a homogenous group of kind of stand-offish people that keep to ourselves, and it makes sense,” Cahill said. “Skateboarding was inherently attractive to a lot of people, but we were mostly white macho men before the early 2000s – I think because the narrow social identities and norms of the time, for women, people of color, et cetera, didn’t favor them to participate in or attract them to skateboarding at first. But within the last couple of decades, these sort of rigid parameters around the roles of women and people of color opened a little bit – and once opened a little, it’s expanded wide open.”

Along with the culture becoming more diverse and socially accessible, Cahill said skateboarding became more physically accessible once it moved onto the streets and sidewalks, like at UTD.

“Anyone with a skateboard can ride it,” Cahill said “If you go overseas, you’re gonna see kids playing with a soccer ball in any alleyway or any street or any little bit of yard. Same thing with skateboarding – if you just have a little bit of an open path and a board, you can do it. And it doesn’t have any rules like a sport does. There isn’t any proper way to do it. As long as you can ride, you’re skating quote-unquote ‘properly.’ And if you get that feeling that you like this thing that you’re riding, you’re a skateboarder.”

This sort of accessibility is what allowed computer engineering sophomore Kennan Wu to join UTD’s skating community easily, despite no prior experience in the activity. In his freshman year, Wu began riding around purely as a means of transportation. When he got that “a-ha” moment Cahill described, he began making skater friends to ride around with and learn tricks from, who readily accepted him despite his inexperience.

“Everyone was super chill and accepting and I got to learn all the good spots on campus,” Wu said. “Security doesn’t really like us grinding and stuff, but you know, we do it anyways – it’s fun, we aren’t harming anyone. And we can seem like a pack, but we really aren’t intimidating. So, you know, if you want to skate, walk up to any skater. We don’t bite. Unless you hate skateboarding.”

This is the only food website you’ll ever need