Silent performance for an empty campus

Students in Contemporary Art Practices take their performances to the Plinth 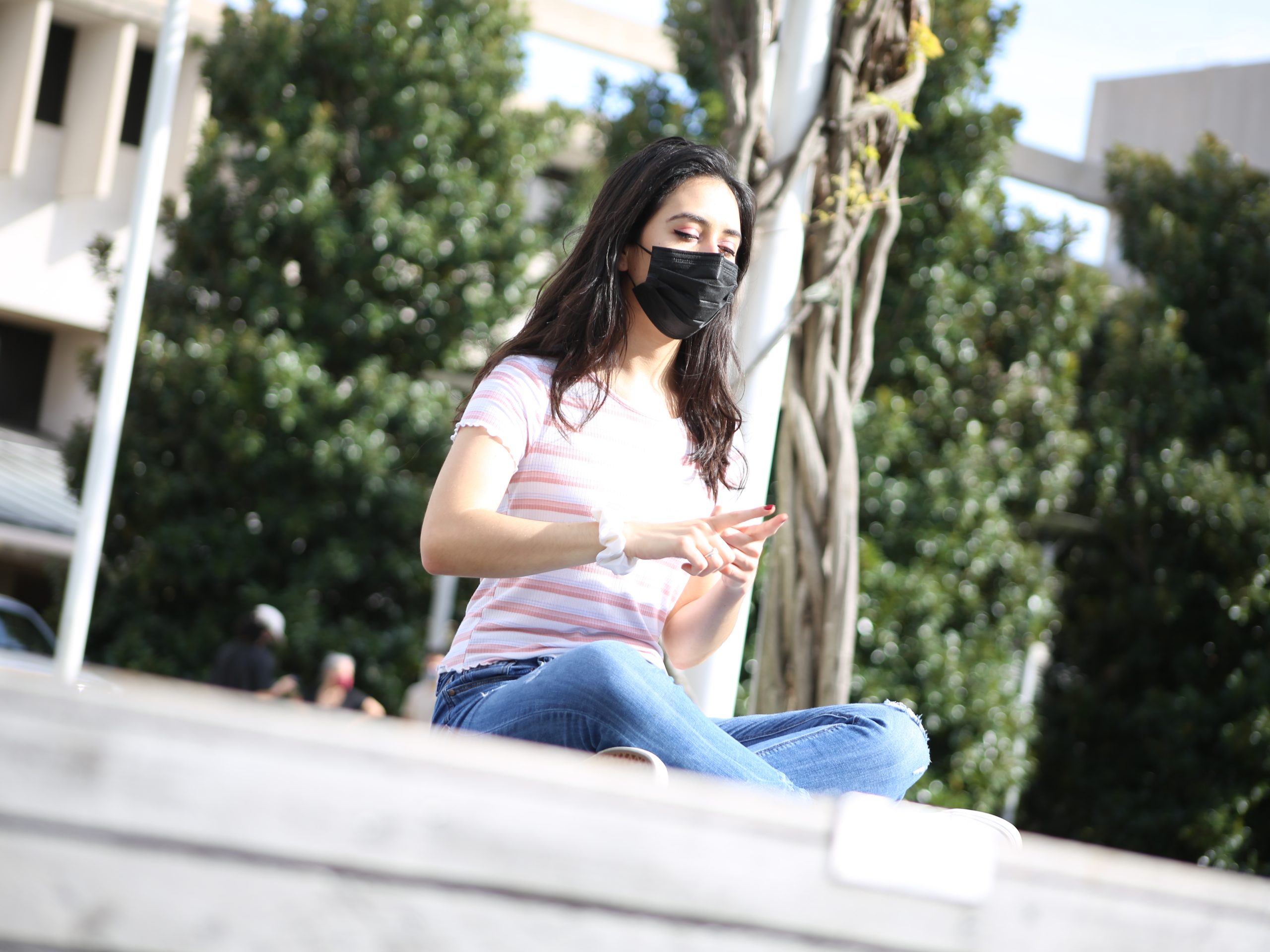 Biomedical engineering senior Laura Vargas Ortiz said that her silent performance piece – signing about her loneliness in ASL – was focused on the emptiness she felt surrounding the pandemic.

Psychology senior Eva Rahman stood silently at the Plinth with two X’s across her chest and a sign reading “Not Yours,” while biomedical engineering senior Laura Vargas Ortiz sat across the circular pool signing about her loneliness in American Sign Language.

Both performances were a part of an art project in instructor Colette Copeland’s Contemporary Art Practices course, a course she says is designed to help students maintain a lifelong artistic practice outside of an academic setting.

“So I designed this course. It’s kind of my dream course – what I wish I would have had in art school,” Copeland said. “We focus with non-traditional materials using non-traditional processes. The emphasis is on creative play and experimentation and not mastering a specific skill.”

The performances that Rahman and Ortiz did were a part of the first performance project of the class, where the focus was on using the body rather than a paintbrush or musical instrument as a tool for making an artistic work. Each student put together a proposal on a theme for their performance before performing either on campus or at home.

Rahman’s focus was sexual assault on women, and while the piece was performed in front of only a few people walking by that day, she said it was a nerve-wracking experience.

“This piece was supposed to be an ode to sexual assault, not specifically on campus but just worldwide. There are a lot of women out there who have been survivors and victims of sexual assault, and I wanted to perform something that would say that women are not, quote-unquote, yours to desecrate, to sexualize, to assault,” Rahman said. “It still took something out of me to actually stand up there. It’s a very public, sort of very political, controversial kind of piece. So I think that’s what I got from it, is this ability to be like, okay, I can do this.”

Meanwhile, Ortiz’s piece was about her loneliness during the ongoing COVID-19 pandemic and how she was handling the situation. She chose to use American Sign Language for the project because of her interest in deaf culture and ongoing learning of ASL.

“I wanted to go to all of the places that I used to be at that were always super full and sit there and feel the emptiness,” Ortiz said. “I just signed how I was feeling and stuff. It was the concept of, if no one’s there to listen, why speak?”

The class is made up mostly of online students, with Rahman and Ortiz being part of the four that chose to take the class in-person. Copeland said she was surprised by the online community, which bonded together well and gave thoughtful feedback to each other on the various projects virtually. She was thankful for the ability of students to take the course online and said that the feedback she’s received demonstrates that students felt very connected and engaged.

“So far [of] what I’ve seen, both of the students had very thoughtful and important things to say with their performance, using their bodies to make a statement about the current climate of the world we live in,” Copeland said. “Many students who are online, they need to be online for various reasons. So I’m just thrilled that they had that opportunity to be able to participate.”