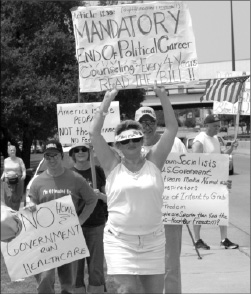 Eric Prince| Staff Protesters confine their dialogue to what fits on a poster board at an Aug 20 rally in Dallas.
Archives
Editorials
Opinion

From the editor’s desk

I’d watched the recent health care town hall shenanigans with little interest, annoyed with the amount of attention the media was giving it. But in fairness, it isn’t entirely the media’s fault that sane, hard-working, educated people aren’t taking control of this debate.
Then Pamela Pilger yelled “Heil Hitler” as an Israeli described his country’s health care system at a Las Vegas town hall meeting and mocked his recent experience with disease, annihilating my apathy in an ugly instant.
If it’s come to this, then we aren’t dealing with passionate, albeit moronic, protest. Our society is standing at a crossroads not unlike the one that actually involved the fascist in question.
Pilger’s Hitler reference is all the things its being called. It was anti-Semitic, cruel and an unfortunate illustration of Godwin’s Law.
I contend it is also dangerously stupid — nothing less than a national embarrassment.
Other countries — the countries we want to underwrite our debt, believe our investment system has really, really gotten its crap together this time (pinky swear!) and unceremoniously brain drain — aren’t looking at us and thinking, “hmm, perhaps there’s something Nazi-ish going on with that health care thing.” They’re thinking “The Organization for Economic Cooperation ranked the United States. secondary education at No. 18 out of 36 nations last year. That seems a little high.”
Similar incidents across the country are dragging nonsensically vile Internet-forum-style commentary into what should be a debate about how we get the most out of our health care expenditures. It’s a life and death issue for many, and it always will be.
A year ago, we thought the world might be in the grips of a second Great Depression by now. I don’t want anyone to endure that kind of suffering, but seeing assault rifles, swastikas and socialism slogans at meetings across the country makes me think we were worried about the wrong precipice.
If we can’t suppress our fascination with hysterical behavior long enough to have a conversation, what’s left? If the Founders’ greatest gift to us — the proclamation that there are certain rights a government simply doesn’t have the authority to transgress — are invoked to justify vicious, intellectually bankrupt temper-tantrums, then where are we going as a society?
If a person can stand in front of an Israeli and praise the genocide of his ancestors, or tote an assault rifle to a site crawling with police and Secret Service agents, they surely have the balls to say: “I don’t think lower and middle class people deserve health care just because they were born here.” Or, “I don’t think this country should risk taking on another fiscal burden right now.” Or perhaps, “I absolutely refuse to comprehend that more than half of all money spent on health care comes from the U.S. Government.” And, most importantly, “I will not change my mind when that person who can’t afford to survive a curable disease is me, or someone I love.”
That’s not intended as an attack on the beliefs of every person who opposes health care reform— real compromise is the only thing that can stitch together our polarized nation. Reform proponents certainly need to wrest attention away from the wannabe reality TV contestants if anything is going to get accomplished, but reform opponents have an even greater imperative — these people are making you look like Tyler Durden, only without the abs, the wit or the awesome editing.
This is where young people saving the world comes in.
We invented Internet culture, in all its crass, irreverent, “that’s 30 seconds I’ll never get back” glory. But it seems some of our parents and a few older siblings have stolen the keys to the truck, drove it down the tubes and are taking it off-road… to town hall health care meetings… which they apparently think are like 4chan, only with important people.
So we have to rebel by being sane. Young people haven’t bought into the health care debate like we did with the 2008 election, forming an unusually visible presence on both sides. This may be because dire and chronic health issues are often less personal for younger Americans.
But we do know what kind of society we want to inherit, and we need to defend it now.
If someone tries to turn a debate into a stage for non-sequiturs and weird performance art, we need to tell them, “the grown-ups are trying to talk here.”
We can contact political leaders. While we’re at it, we might suggest that they have an actual health care reform plan for people to discuss and debate before convening more town hall sessions. This would reduce the number of parallels between a health care town hall meeting and a Jerry Springer filming — a general theme, a bunch of people who love to yell and one person in a suit.
We can e-mail and call media outlets and ask them to do their jobs by giving only proportionate coverage to town hall crazies and their counterparts in other venues, meaning if 30 questions are asked and only one or two are patently insane, it is not  the lead story.
We can turn to our peers and neighbors and say, “Nice Obama-Joker shirt. What do you think we should do about health care and why?” Your freshman rhetoric professor used up all that oxygen talking about arguments needing a solid basis in fact — now’s your chance to power trip people about having a reason for their beliefs.
I encourage real grown-ups to do the same, but I don’t think most university staff and faculty would hesitate to call someone out on such antics anyway.
If you’re ready to commit a non-random act of sense-filled discourse, the Facebook group, “Say something sane about health care reform” contains some links you might find useful.