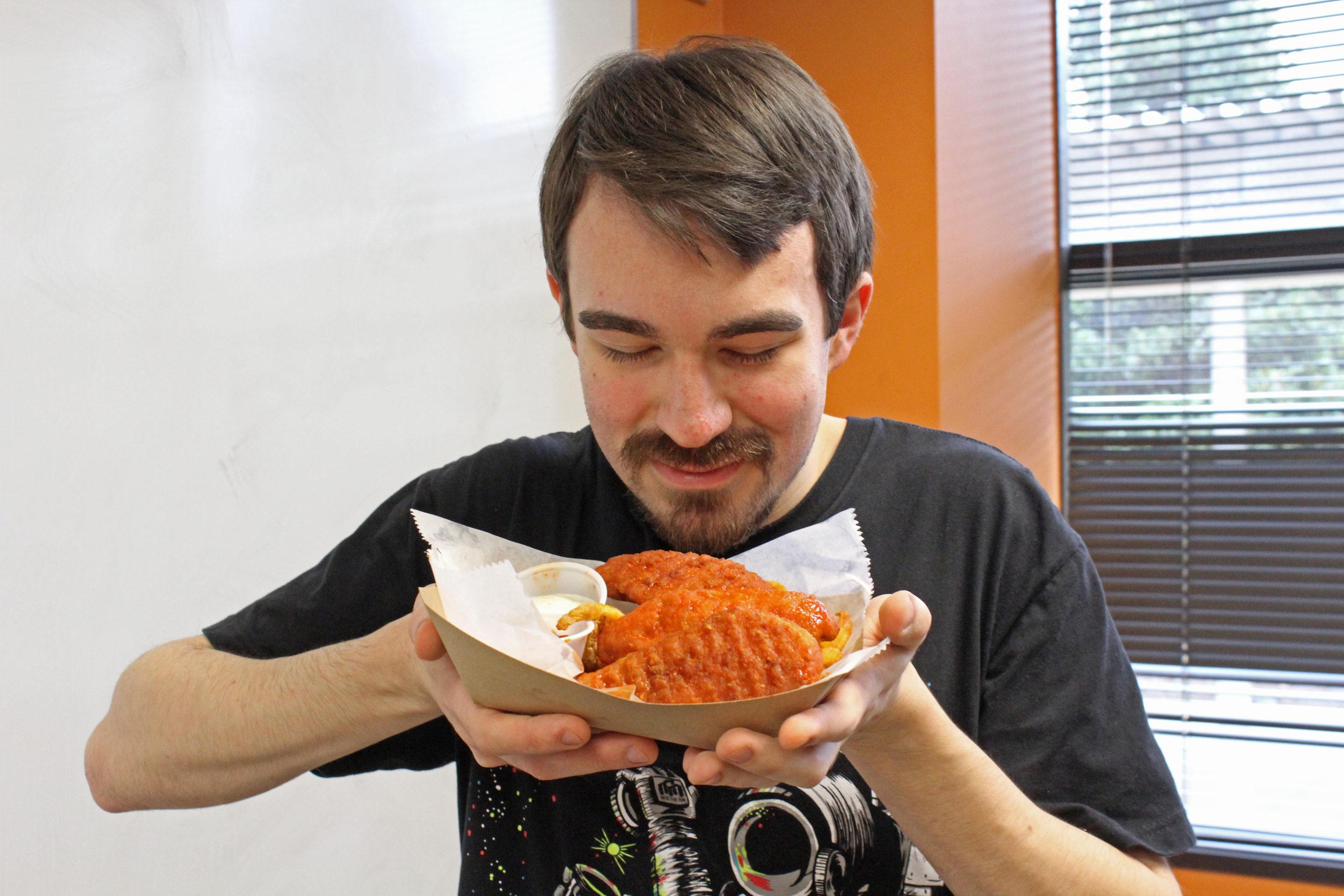 Economics senior Joshua Evers has been using the UTD subreddit as a platform to share his reviews of vaious chicken tender restaurants since April 2019. Photo by Anna Phengsakmueang | Photo Editor

A playful online joke between friends has now grown into a Reddit sensation at UTD. The centerpiece of the content? Chicken tenders.

Economics senior Joshua Evers said it all started in April 2019 when he had a friend who was constantly making jokes about chicken tenders. At some point, he suggested that they just go to the UTD Pub for some chicken tenders.

“I looked at my friend and I said, ‘How funny would it be if I hopped on the UTD subreddit and I just wrote the most meme review of these, like I was some food critic?’” Evers said. “And he was so into it.”

Under the username u/ThrowawayforTendies, he posted the first of now five chicken tender reviews to the UTD subreddit. In the beginning, reviews were posted within one to two weeks of each other, and over time the reviews have gotten more and more elaborate, with more things considered when reviewing the chicken tenders. Criteria include the aesthetic of the restaurant, the crunch factor, the seasoning and even the fries.

“I feel like the classic meal whenever you’re not sure what to get at a restaurant is always chicken tendies and fries and those two are so related, ” Evers said. “So you (have) to know how the fries are going to taste, how it’s all going to complement each other.”

Originally, Evers ranked the restaurants on a number rating, but quickly realized that when most places are similar, it becomes difficult to easily compare everything. Evers fixed this by starting to keep a ranking of everywhere he has reviewed, so that comparison becomes easier over time.

“Right now, Super Chix is at the top, because they fry their tendies in peanut oil. It’s like Raising Canes and Chick-fil-A had a love child that’s just better than them. It’s got the sweetness of the Chick-fil-A frying, the seasoning and freshness that you get at Raising Canes,” Evers said. “It just comes together in this beautiful harmony.”

Following Super Chix is Raising Canes at number two, then Chick-fil-A, the Pub and Chili’s at the bottom.

But why specifically the chicken tenders? Evers said that chicken tenders are something that has universal appeal, so that regardless of age they can be enjoyed.

“It’s not small like a nugget, it’s not grown-up feeling like a bone-in wing. It’s that perfect Goldilocks zone right in the middle,” he said. “I’ve never met somebody that has not had a soft spot in their heart for chicken tenders.”

Although he took a short hiatus, Evers was called back to action by a subreddit post on Jan. 18 asking about the absence of chicken tender reviews. With previous reviews gaining hundreds of upvotes, and the masses of UTD’s subreddit and more asking for his return, Evers returned to review Super Chix, and soon Golden Chick.

Evers has decided to keep doing reviews since they’ve been well received and it’s just been fun to do.

“May your tendies always be crispy and may the sauce always be bountiful,” he said.