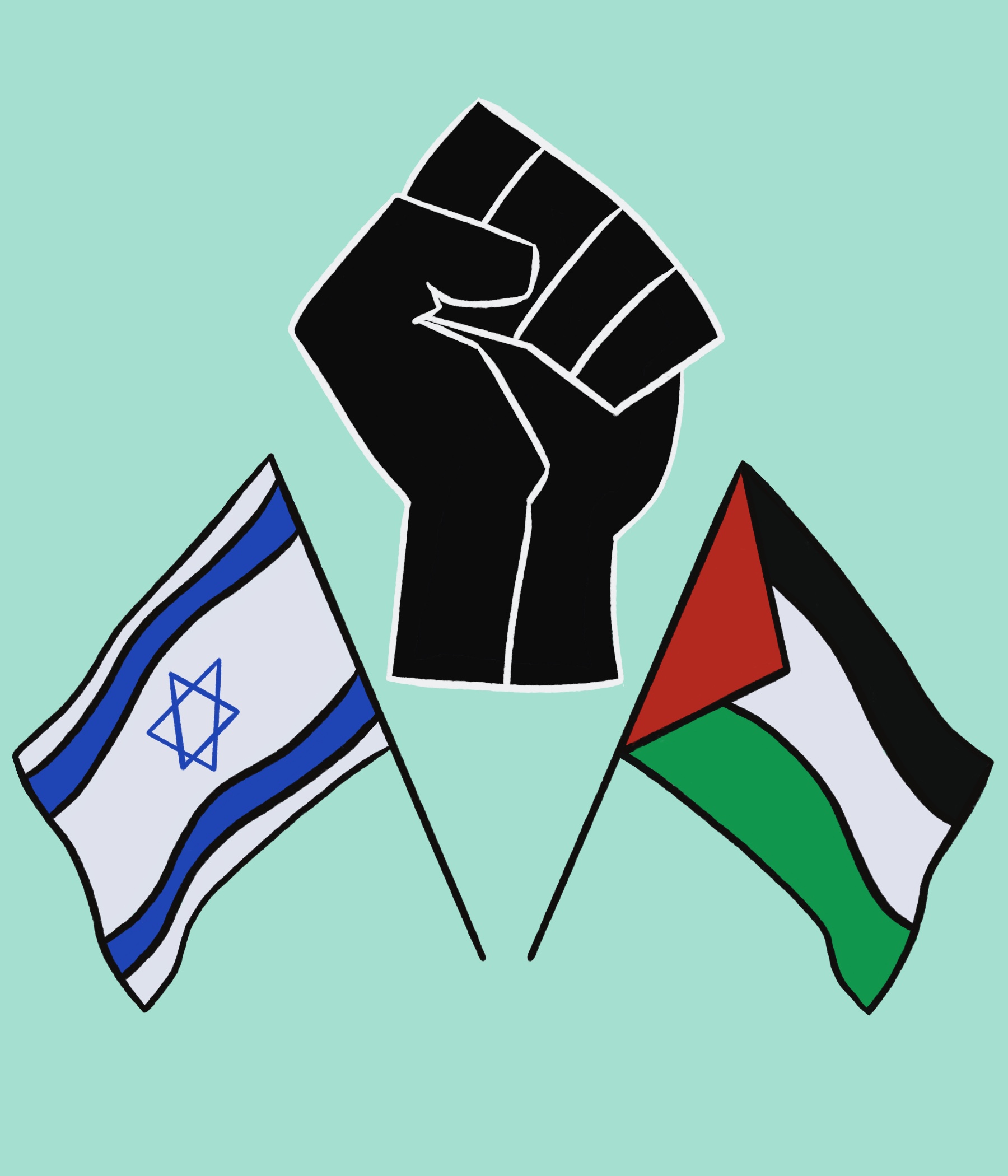 The powerful cries of “I can’t breathe” and “Israel, we know you murder children, too” have joined hands to bring justice to those who are suffering the most. By contrast, certain pro-Israel groups have embraced the BLM movement whilst failing to acknowledge discrimination against Palestinians.

Since the establishment of the Israel state on May 14,1948, and the following U.S. de jure recognition, tension between Jews and Arabs in the region has been continuously unsteady. For years, both groups have been fighting for land that is either considered to be holy or simply a place to call home. As the Israeli government currently controls more than 90% of the land, Palestinians have seen a rise in systemic inequity. Based on international law, illegal occupation of Palestinian land, unequal distribution of resources, unjust policies and murder of unarmed protestors and children are just some of the atrocities committed against such second-class citizens.

From the Black Lives Matter movement, Palestinians have been further mobilized to advocate for basic human rights. This influence has garnered much backlash. In 2016, the Movement for Black Lives, M4BL, published a document listing demands for reform and ending violence against all black people. A particular statement that censured the U.S. for supporting the “genocide of Palestinians” led to complete withdrawal of support by Jewish groups such as Jewish Community Relations Council and Zionist Organization of America. In contrast, The Reform Jewish Movement, Jewish Federation of North America, Religious Action Center, National Council of Jewish Women and J Street were some that supported parts of the BLM but condemned the use of the words “genocide” and “apartheid.” Jews of Color Caucus amongst others backed all of M4BL and the fight against Palestinian discrimination.

In 2020, JCRC has taken a cautious stance on the Black Lives Matter movement alongside The Reform Jewish Movement, criticizing any acts of anti-Semitism. Jews for Justice for Peace, Jews for Justice for Palestinians and Brooklyn for Peace have remained static on their stance against all injustices whilst in support for a peaceful Israel. Pro-Palestine groups such as ALLMEP, EcoPeace and Mejdi have also adopted a need for alliance while few others hold extreme ideals for a one-state policy like PLO. It is thus evident that there are a wide variety of perspectives based on Israel and the BLM movement across the spectrum. The concern, however, is about groups that openly support BLM in present day but have a recurrent history of silence towards or cherry-picking information on the repression of Palestinian rights.

Two major pro-Israel groups in the U.S. tweeted condemned police brutality against African-Americans. American Israel Public Affairs Committee vehemently spoke against “racism, intolerance and inequality,” while affirming its commitment to “equality, freedom and justice.” Anti-Defamation League also condemned “racist policing and violence” by raising awareness to others who have died at “the hands of police officers.”

While ADL claims “to secure justice and fair treatment to all,” it has also been linked to a questionable past. ADL has been involved in attempts of collaborating with the FBI, domestic spying of Arab-Americans and civil rights organizations and unfairly categorizing Muslims when protesting against the construction of a mosque near Ground Zero. Today, it seems that ADL has changed its outward look through continuously advancing “A World of Difference” curriculum “designed to combat prejudice,” creating an Interfaith Coalition on Mosques, criticizing Islamophobia and censuring an instance of extremist crime against a Palestinian teenager. Despite such glowing support for minorities in current years, ADL’s outcry against the news of annexation of the West Bank has raised concern.

In a recent article published by the deputy national director, the group argues that both Israel and Palestine need the two-state solution. This is a perfectly reasonable stance to uphold, but the apparent fear of the other option, a one state solution with Palestinians as a majority, is troubling. The belief “this majority would either have equal rights to those of Israelis, threatening Israel’s Jewish character, or they would be kept as second class, non-voting citizens, which would threaten Israel’s democratic character” is emphasized. Furthermore, the view that “no longer could Israel be a Jewish state, deciding its own destiny when the parliament would be divided fairly equally between Jews and Palestinians” is incredibly unsettling when the group speaks so often against inequality. The organization has been known to pride itself in its commitment to “fighting all forms of hate” and has called for support in “combatting the bigotry, racism and discrimination that targets marginalized communities today.” Thus, there exists both a shining support of the BLM movement, yet a downplay of the fight for Palestinian civil rights as dissimilar and a movement “undermining the Jewish state” on its platform.

AIPAC has followed suit. While the group was criticized for its lengthy silence on BLM protests, its support for the movement has brought new controversy. In the past, the organization has stayed silent on “laws that either deny the migration of Ethiopian Jews, or classify them as second class citizens” in Israel. It has also allowed Steven Emerson, head of investigative project on terrorism, to publicly speak for the group after making anti-Muslim comments in 2016. Despite this, in 2019 AIPAC released a public tweet that separated itself from a far-right political party in Israel, Otzma Yehudit, that argued against Arab rights. However, as annexation looms as a growing possibility now, AIPAC has remained publicly silent again. Behind the scenes, AIPAC has allowed criticism among lawmakers regarding the annexation so long as military aid to Israel does not cease. The annexation of the West Bank will certainly lead to the displacement of many Palestinians. Yet AIPAC’s letter to its Black-American members which states pride in standing “shoulder to shoulder with you” and lack of words for its Palestinian counterparts is clear.

When organizations like BLM UK or individuals like Ilhan Omar speak their own personal criticism on such groups, they’re often labelled as anti-Semitic. A recent tweet by BLM UK that denounced British politics for “gagging the right to critique Zionism” brought much denunciation. Campaign Against Antisemitism, a British pro-Israel group, tweeted that “BLM should aspire to be a movement against racism that unifies people and achieves lasting change.” In addition they have claimed that there’s been violence against them from “prominent BLM supporters with no official condemnation.” Yet, by stating themselves that “the right to ‘self-determination of peoples’ is universal” this underlines that one should and must not bring the same harm towards others, and in this case, Palestinians.

Both groups have its supporters and critics from varying backgrounds and perspectives. Jewish Voice for Peace and Union of Reform Judaism have condemned ADL for its past. ”Pro- Palestine groups, including Al-Awda, Students for Justice in Palestine, Answer Coalition, Code Pink and Neturei Karta” have given speeches against AIPAC. Representative John Yarmouth has also taken a stance against AIPAC in a tweet explaining why he would not join the group’s conference in 2019. While others such as the American Jewish Committee, The Reform Movement and many Rabbis wholeheartedly support AIPAC and denounce its opposers. Whether one may agree or disagree with ADL or AIPAC, it is noteworthy to recognize how these two organizations have been incredibly influential in gaining support for Israel and a rightful home for Jews of which they have been denied for so long. Yet, it is also critical to note the irony in the public support of such groups on BLM but not that of Palestine.