Resolve to not Resolve 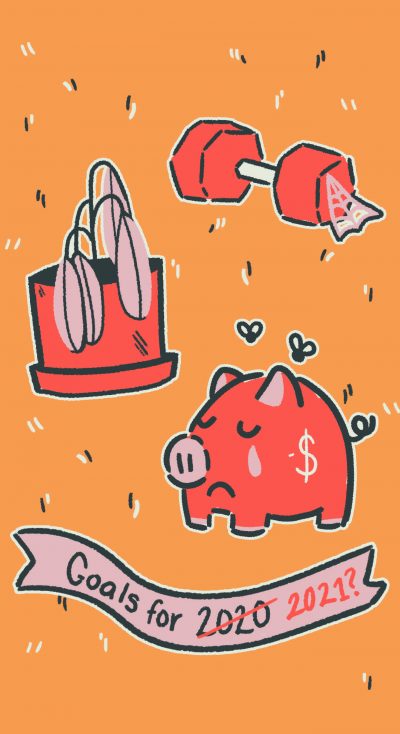 Why New Year’s resolutions accomplish nothing

As 2020 approaches and electro swing hopefully becomes vogue for the Roaring 20’s reboot, some people might wistfully look to the future and make a New Year’s resolution. But they shouldn’t. New Year’s resolutions are a timeless tradition of lying to yourself about self-improvement. Instead, focus on making and achieving goals in pursuit of a vision all year round.

Some might argue that New Year’s resolutions are a New Year’s tradition, harmless and made all in good fun. After all, it’s not bad to make goals in the spirit of self-improvement. But the issue isn’t with starting goals: it’s completing them. According to the University of Scranton, only 8% of people follow through on their New Year’s resolutions. That’s a lot of people not accomplishing — and, ultimately, feeling unfulfilled about — something they promised themselves they would do. It really is like lying to themselves about doing something.

The trouble is that New Year’s resolutions are too broad. Take the common resolution of losing weight. How is this goal going to be accomplished? Some people think that getting a new gym membership will help, leading to an almost comical rise of people at the gym in January, with the International Health, Racquet, and Sports Club Association reporting a 12% increase in membership at fitness clubs in January. But it almost always dies out as February comes along. Without a step-by-step plan, the goal of losing weight seems constantly out of reach, almost futile.

Instead of diving headfirst into vague goals, these resolutions should be broken down into smaller goals. In the book “The Entrepreneurial Instinct: How Everyone has the Innate Ability to Start a Successful Business,” author Monica Mehta says that the more times someone succeeds at doing something, the more dopamine the brain will release, helping the person continue to succeed. Setting goals too high or too broad increases the chances of failure, and consequently, an absence of dopamine.

Take the example of improving grades: break it down to its essential goals. Some readers may be familiar with the concept of a SMART goal. Specific, Measurable, Attainable, Relevant and Timely, goals patterned after this fashion create a specific goal for you to achieve. So for getting better grades, an example goal might be to set aside 2 hours for study every other day for a specific class. This goal specifies exactly what should be done, is measurable because of the time set, attainable  and relevant to the overall goal of improving a grade.

Now then, some people may still defend the New Year’s resolutions as something fun and accomplishable. And that can be true. People still manage to achieve their broad and non-specific New Year’s resolutions, and other studies done by the University of Scranton point to self-efficacy and readiness to change as traits of those who successfully met their resolutions. But this article isn’t for them. It’s for the people like me who are rather lazy, and perhaps not as ambitious, and more prone to be distracted and not finish things.

At the start of 2019, I resolved to go to the gym more, like so many others do. And it did not happen for the majority of the year. Sure, I went to the gym sometimes, and sometimes is more than not at all, but ultimately, I did not succeed in what my goal really was: to go to the gym on a regular basis. I was too lazy to go. I had “more important things to do” like study and play “League of Legends.” By the time 2020 has come around, I fell into the majority of people that do not live up to their New Year’s Resolutions.

So when I was reminded of SMART goals for a second time in my freshman seminar class, I resolved to start accomplishing something, however small it was. Funnily enough, it was not any of the SMART goals I created for the assignment that I put focus into, but one regarding my finances: Save at least $20 dollars a week. It fulfilled the SMART goal outline, and it was a nice small thing to accomplish every week, seeing up to even $30 or $40 dollars go into savings if I budgeted that week particularly well.

This leads to one more point about New Year’s resolutions: Why wait for the new year? Don’t limit those goals or self-improvements to New Year’s: start making those goals all the time. There’s no magic moment of the year for self-improvement; self-improvement is a constant and evolving process. Be the change you want to see and manipulate your dopamine receptors to start being more productive. Start small, so that larger goals can be accomplished. Maybe this time, that January gym membership won’t go to waste.