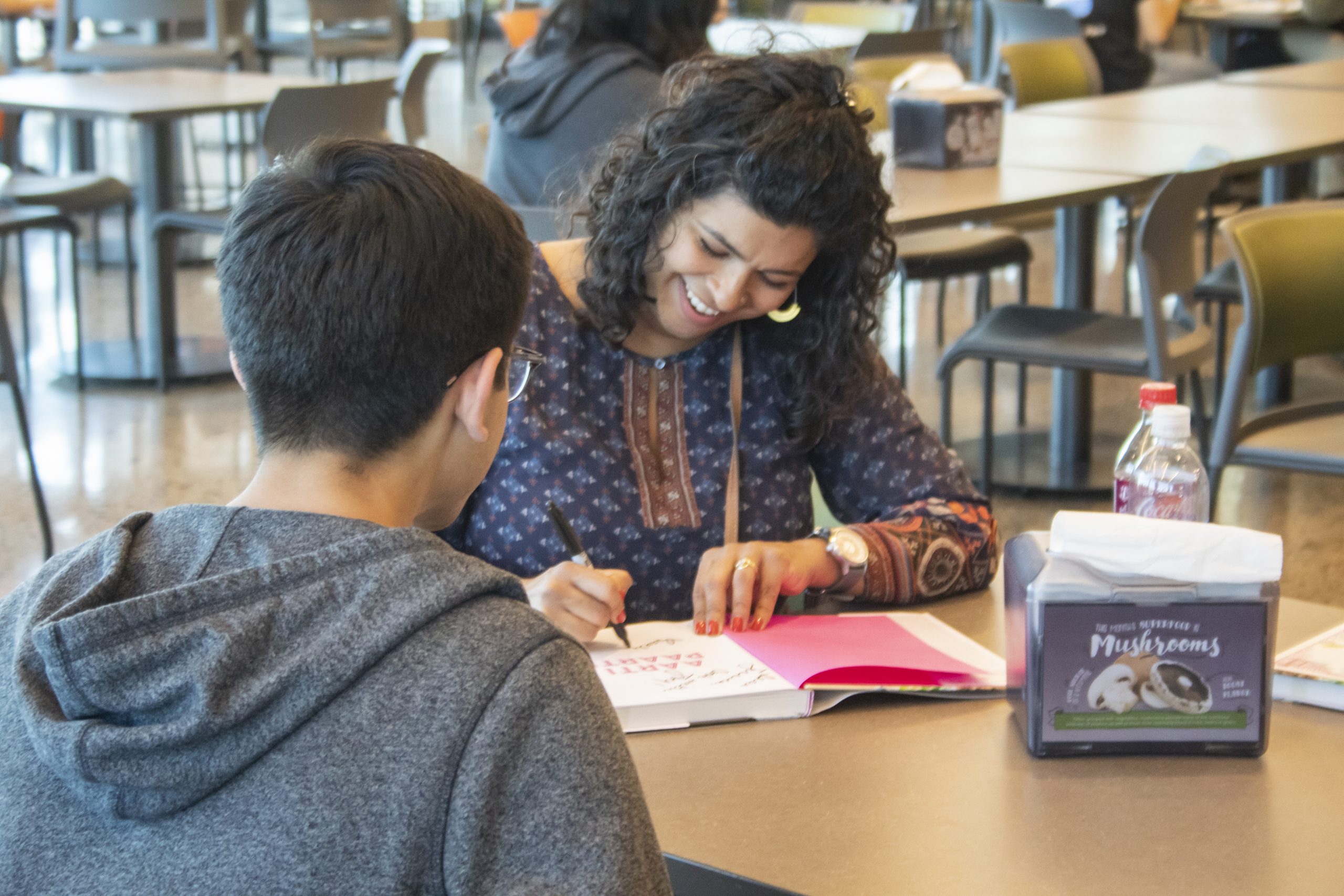 UTD Dining and Auxiliary Services hosted chef, television star and journalist Aarti Sequeira this month. Sequeira graduated from Northwestern University as a journalist, worked for CNN and produced a show on HBO. Not long after, Sequeira was the winner of the sixth season of Food Network’s “The Next Food Network Star” and hosted her own cooking show “Aarti Party.” She’s known for her cooking style: American classics with an Indian twist. The Mercury sat down with Sequeira to talk about her career path, her love of spices and diversity in media today.

Q: Something that you’ve consistently incorporated into your dishes is the influence of Indian and Middle Eastern flavors. Could you explain the importance of staying with those themes?

A: Guy Fieri calls me the spice queen. It’s like his new name for me. I was like ‘Alright, I’ll take it.’ Because I am. I’m obsessed with spices. I’m obsessed with those flavors. And I think it’s because, yes, I grew up with them. The idea of going to spice market, I mean, I would do that over going to see Beyonce, you know what I mean? I want to go to a spice market. I think for me, the thing about spices is that they’re just little gifts. Not only do they offer so much flavor, they help take something humble, like a cauliflower, and they just transform it into something that is royal. There are dishes in India, and I’m sure it’s the same all over the world, that the highest of high classes eat and the lowest of low classes eat, and it’s the same dish. And to me, that’s super powerful, right? It’s the great equalizer. In India and in the Middle East, a lot of that is spices, so that’s one part of the gift. The other part of that gift is that they are naturally so good for you. I mean, who is not taking a turmeric pill right now? I’m just really obsessed with them for those two reasons. They can transform humble food and make it something awesome, and that they offer so many health benefits.

Q: After winning “The Next Food Network Star,” you hosted your own show, where you became one of the only Asian hosts on like a popular TV network. How do you feel about the current representation of Asians on popular TV shows such as Food Network and beyond?

A: When I look at the landscape right now, I’m amazed, I would never have guessed. When I won, I remember that there were things that I wanted to do and I got the impression that I wasn’t a man, and I wasn’t white. I needed to just lower my ambition just a little bit because it just wasn’t realistic, you know? Now I’m kind of sitting in pole position — and not through my own doing, I’m standing on the shoulders of other people — but I just think that there’s so many more opportunities for everybody. And listen, I’m married to a white man, so I don’t want that voice to be extinguished either. I hope the next step is that we’re not noticing people’s gender or race, we’re actually listening to the words that are coming out of their mouth. You know what I mean? We’re not looking at their dress size, we’re not looking at their exquisite skin, we should be listening to what people have to say, because that’s much more important: that comes from the inside. I’m really excited about it, but I’m ready for the next thing where we’re not counting and saying, ‘Well, there’s one black person, one Asian person, one white person.’ You know what I mean? It needs to get to a point where it’s like, ‘There’s a bunch of people and they are really smart, and they have great things to say.’

Q: What advice would you give to us students who are trying to figure out what we want to do with the rest of our lives?

A: I think that the biggest thing that I have learned is to expect to get uncomfortable, to expect the rug to be pulled out from under you, and to be okay with it. It’s hard, you’re going to freak out, but the freak out was part of the lesson. When I realized that I was not going to be a journalist anymore — I had put so much of my identity in that — I didn’t know who I was anymore. There were mornings I would wake up and I was like, ‘Lord Jesus, why did you wake me up again? I don’t even know what I’m supposed to be doing.’ Especially as college students, your entire life up to now has been school, and your path, and the next thing you do, and making a living, and all of that kind of stuff. Of course, I can’t come around and be like, ‘Well, it’s not that important.’ It is important. But your identity is not your career, okay? It’s okay, if things go sideways. At some point, they may, they may not, they probably will. And it’s okay. You can be comfortable in that. Know that that’s a period where you’re actually going to figure out who you are. It’s okay if you end up doing something that you didn’t go to school for, or you didn’t expect yourself to do. There’s usually a huge gift coming your way in those times.