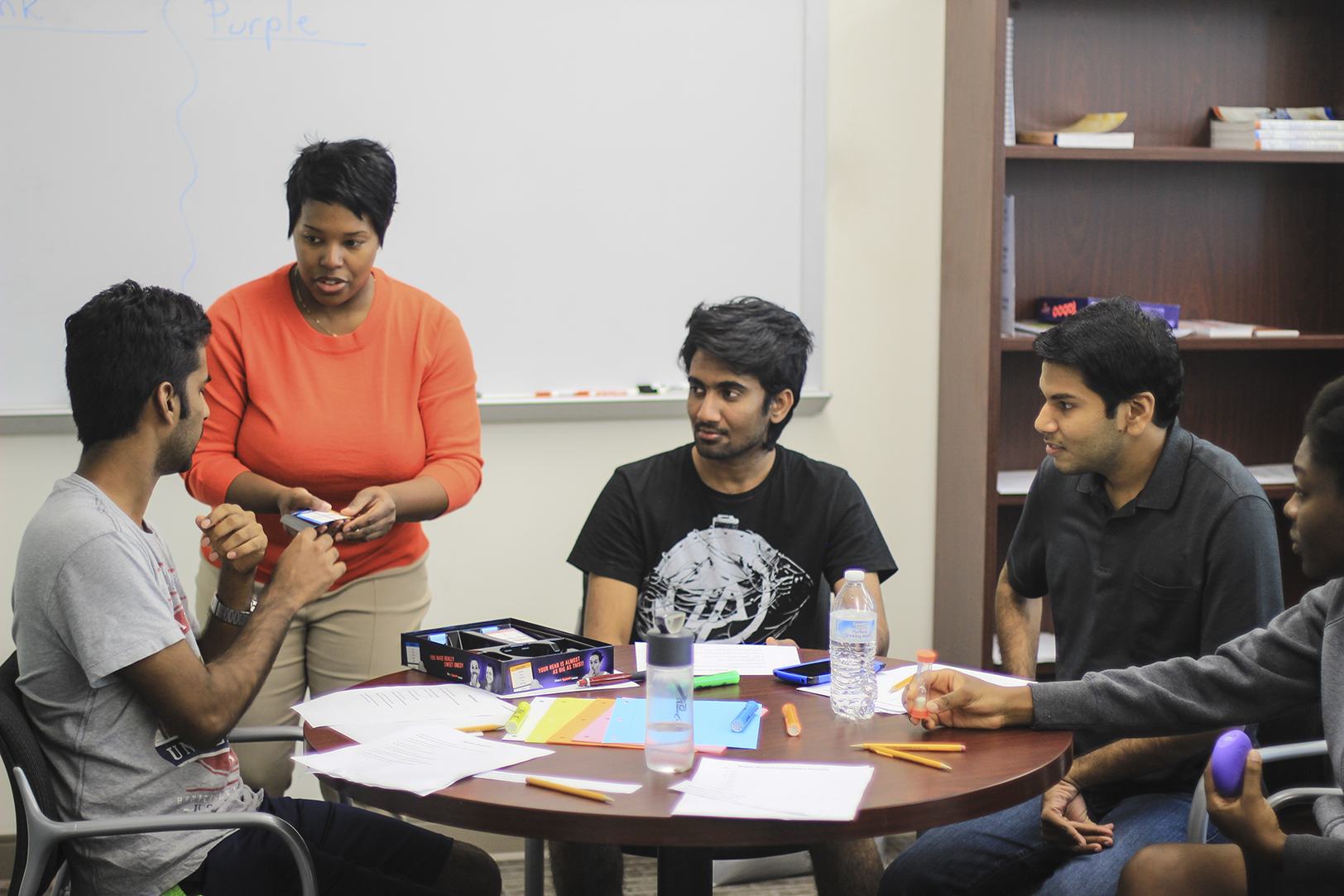 From the Mercury Archives: May, a learning specialist at UTD with a focus on ESL, runs her speech program for international students in the Jindal School of Management. Photo by Ankith Averineni | Mercury Staff.
Campus News
News

For over a year, international students in the Jindal School of Management have been receiving help from a faculty member to work on an aspect of English that is crucial to their communication: their accent.

Every Thursday, a group of students meet with Morgan May, an ESL specialist who runs the accent improvement workshop.

The workshop is open to all JSOM students (with a focus on international students) and teaches them how to communicate more effectively in either a social setting or a future workplace.

“So we can build a solid rapport, so we can learn from each other … I think that is one of the main reasons (I do this work),” May said. “The goal is to hopefully encourage students to become invested in their language learning and their communication skills. Language learning … is almost like playing a sport or playing an instrument. You have to practice regularly.”

Some students said having a strong accent makes it difficult for them to get their point across in conversations.

Olajumoke Faleti, an accounting junior from Nigeria, said she used to repeat herself often while trying to speak in English. People weren’t able to recognize the words she was saying because of her accent.

“When I first came, they wouldn’t get what I’m saying, so sometimes I wouldn’t want to talk because I know that they cannot understand what I was saying. It was really hard,” she said. “English is the official language back home, but they don’t teach us the right phonetics. The phonetics (were) really bad. I would advise (international students) to attend workshops like this because … you actually understand why the Americans speak … the way they do. It’s better than just imitating actors (since) you don’t really know why you’re doing it.”

Hollywood movies are often the only experience these students have with the American accent and American slang. However, Faleti never used movies for an educational purpose.

“I used to watch a lot of American movies back in Nigeria,” she said. “But I wasn’t watching to learn English. I still got what they were trying to say … but I’ve never watched a movie to work on my accent or anything.”

On the other hand, Sukumar Atluri, an informational technologies management graduate student from South India, said American movies were quite helpful.

“Actually, there is no proper teaching medium for English back in India. (Here), the lessons are taught in English, and all the communications will be going on in English … you will have interactions with (other people) so you will learn a lot better,” he said. “My biggest challenge is my accent. For me, there are two ways of improving. One is watching more number of Hollywood movies, and the other is having more interactions with international students because you learn a lot better like that.”

Informational technologies management graduate student from South India, Joseph Veeravalli, said American English was different from what he was accustomed to.

“Basically in India, we spoke in our mother tongue at home,” he said. “We just spoke basic English, but the pace and slang is completely different, so I just want to improve on that.”

Veeravalli was watching movies at home too, but he realized guided learning with May would be far more effective in improving his pronunciation.

“First, we do practice with some words and their slang (equivalents). Later we practice sentences (with) those words. We concentrate on those words which are typical (so) we can have conversation with others,” he said.

Faleti said the workshop consists of a variety of activities.

“We do a lot of different things. We practice an international phonetic alphabet, then we apply it to different words. You will be shocked like, ‘Wow, I can’t pronounce this word!’ But she will correct you and you can work on what you’re doing wrong,” she said.

May puts an emphasis on application in her workshop through games like Taboo and a card game that requires players to understand what a word means using terms that are uncommon.

“(May) tells us to incorporate (my learning) in everything we do … I use it in class, when I’m doing presentations. I try to use it anywhere, even if I’m talking to someone on the bus,” Faleti said.

Communicating in public with a better accent reduced Faleti’s anxiety.

“It’s easier when you can use what she’s teaching you because it makes your speech easier. It’s less stressful,” she said.

Hadeel Alzuwaydi, an accounting graduate student from Saudi Arabia, is new to the workshop. She studied English in Saudi Arabia, but said her skills were strengthened only after she had studied here.

“Back in my country, English is the second language. We study it in … school … so when I came here, I had basic knowledge English from the movies or TV shows,” she said. “My English got better (because) I got academic English for a year… I studied at University of North Texas.”

For Alzuwaydi, the accent workshops and English improvement are not just preparation for a future career, but actually a requirement because it is spoken by almost everyone she interacts with. Alzuwaydi said that English will help her further her academic pursuits.

“My goal is actually to just continue studying and learning accounting,” she said. “I want to learn about different cultures and try a different life.” 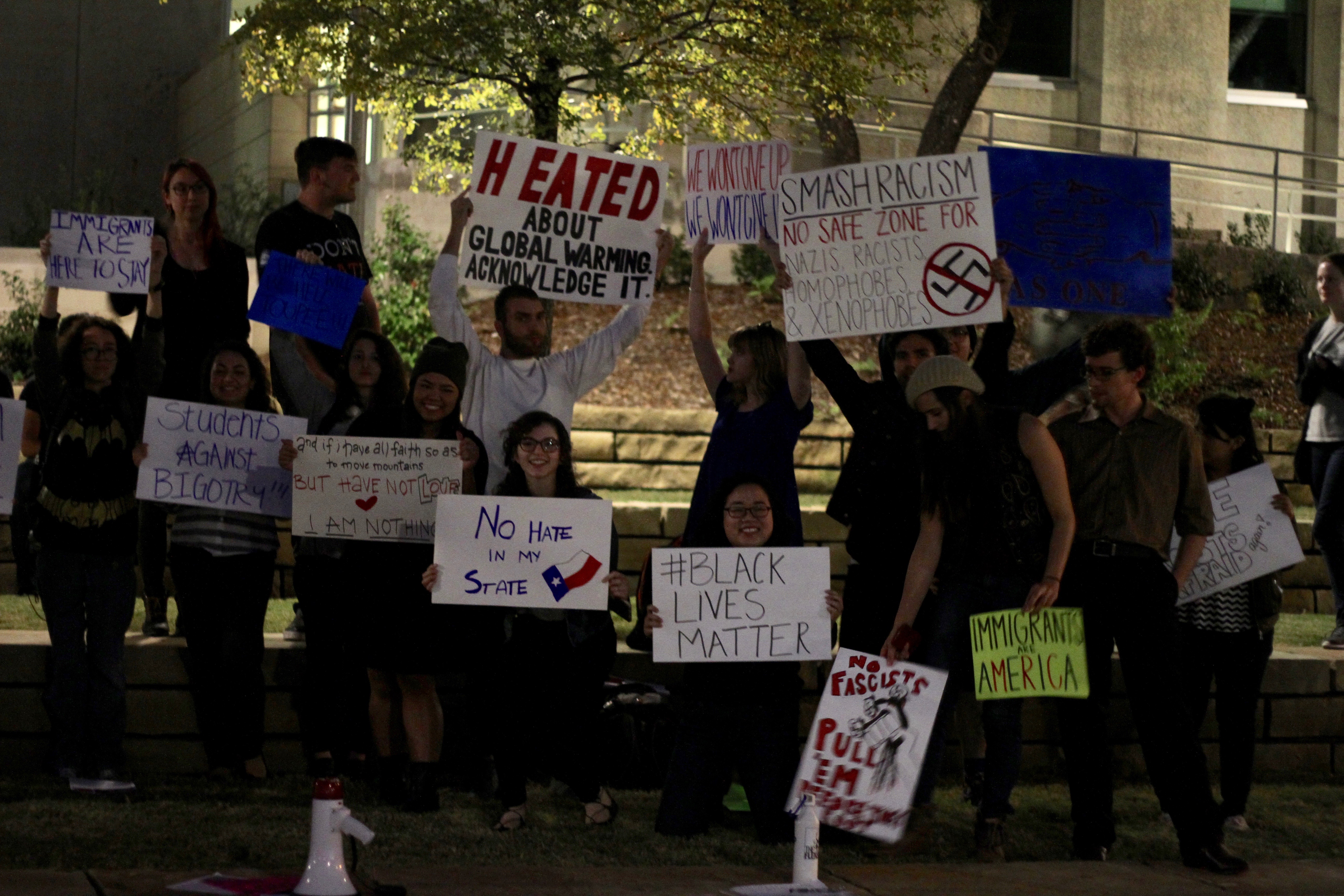