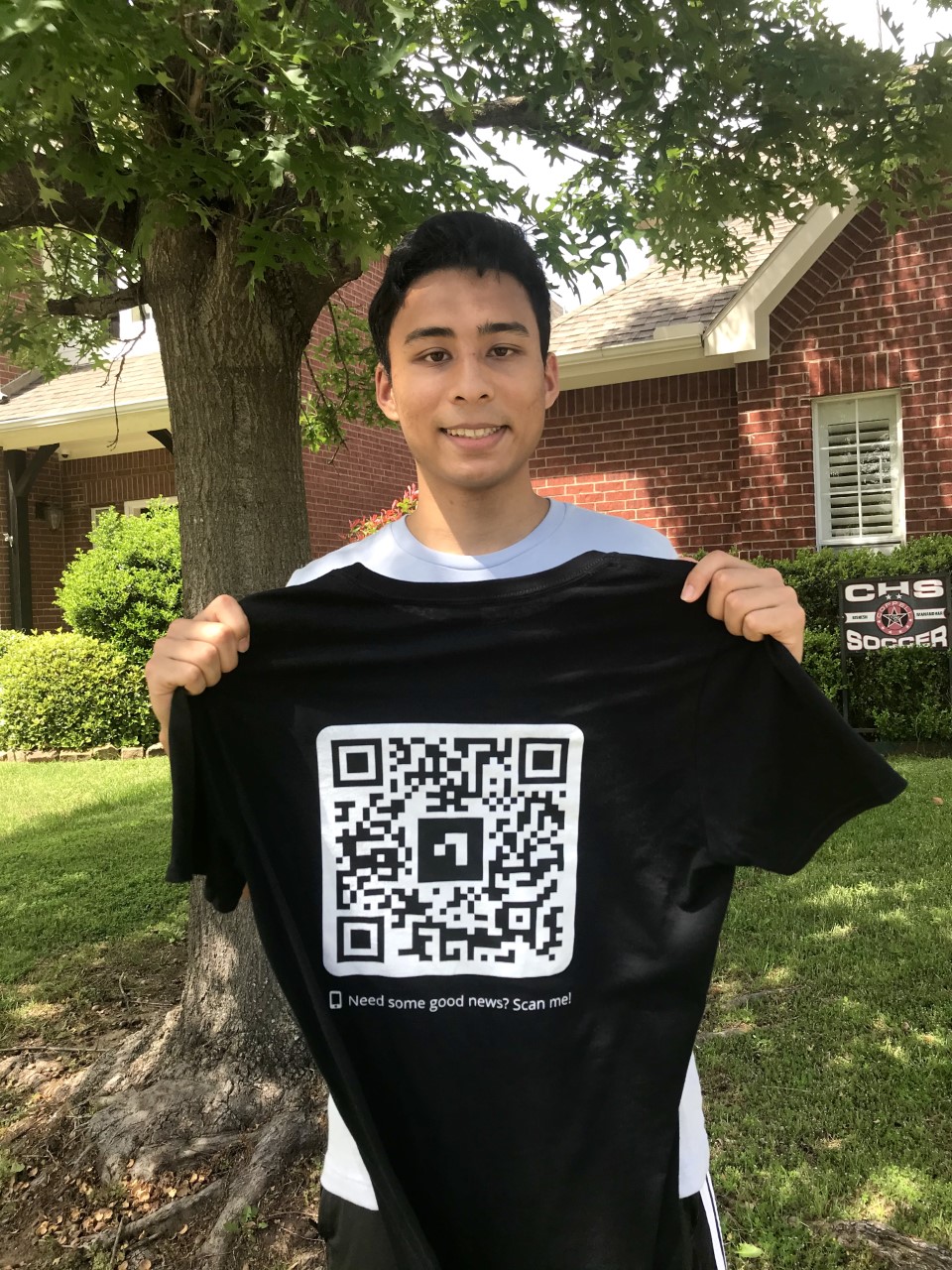 Computer engineering senior Bishesh Manandhar launched his business on April 3 and has donated over $200 to various mental health charities since the opening. Photo Courtesy of Bishesh Manandhar

An engineering student aiming to lift moods and brighten days recently launched a business to bring his idea to fruition using T-shirts.

Computer engineering senior Bishesh Manandhar sells shirts with graphic designs on the front and QR codes on the back which, when scanned with a phone, link to positive articles, videos, quotes and other content.

“Let’s say, you’re at Starbucks, you’re waiting in line, and you’re having a bad day. And the person in front of you, you see the back of their shirt,” Manandhar said. “Then you can scan it and then see something that might make your day a little better.”

ShareHealth, Manandhar’s business, currently has five collections which are designed to be centered around a specific aspect of mental health: Comfort, Educational, Cultural, Funny and Inspirational. Each collection has a different graphic design and QR code to fit the collection’s intent. The Comfort collection, for example, links to uplifting news stories from this year, while the Funny collection links to funny videos of dogs and cats. It is these QR code links that allow the ShareHealth wearers to share a bit of happiness to whoever may cross paths with them.

“You never know who (will) scan your shirt,” Manandhar said. “So you’re spreading that aspect, whether it’s funny, whether it’s cultural, whether it’s comfort, you’re sharing that with other people who you don’t know.”

It was shortly before spring break when Manandhar first had the idea for the business pop up in his head.

“I was in the lecture hall, and there was a person in front of me, and I was just kind of staring at the back of their shirt. While I was zoning out, I was thinking, ‘Oh, it’d be cool if there was this idea, where I could help other people that are having a bad day and can’t necessarily talk to someone about it,’” Manandhar said. “I thought to myself, when people go out, they usually always have two things on them, they’ve got some clothes on and their phone. I wanted to put those two things together and create something that that’ll help people — especially with mental health, as it’s something that everyone goes through.”

Being able to help improve people’s mental health and spread awareness is a cause that Manandhar believes in, which is why ShareHealth donates to American Foundation for Suicide Prevention, Brain & Behavior Research Foundation and The Jed Foundation.

“Everyone’s gone through things that are more internal. There’s external pain, but there’s also pain going inside your mind that can only be fixed by talking to someone or reaching out to certain resources,” he said. “There’s a lot of help for external pain, but for what’s going on inside, it’s not as readily available. I kind of wanted to spread awareness to that.”

Two months after Manandhar initially had the idea, he began selling shirts. The business opened on April 3 and so far has raised more than $200 to donate to the three mental health charities.

“I don’t really care if I sell 10 shirts or 10,000 shirts, as long as the message behind it is what’s really out there,” he said. “You never know who’s having a bad day, so just a simple something like this can cheer anyone’s day up. So as long as that’s out there in the world, I’ll be happy.”

Manandhar said he hopes to expand the business by selling shirts that the customer can personalize. It would allow them to customize the link from the QR code to display websites, photos and videos of their choosing.

“Even though I’m a computer engineering major, I don’t want to be solely just an engineer. I kind of like doing it all. I like doing the engineering aspect. I like doing the business aspect. I like marketing. I like talking to people. So, I don’t have one specific career goal that I have in mind,” Manandhar said. “But whatever I do, as long as I’m starting my own thing and doing it to help others, then I’ll be good.”

So close, yet so far