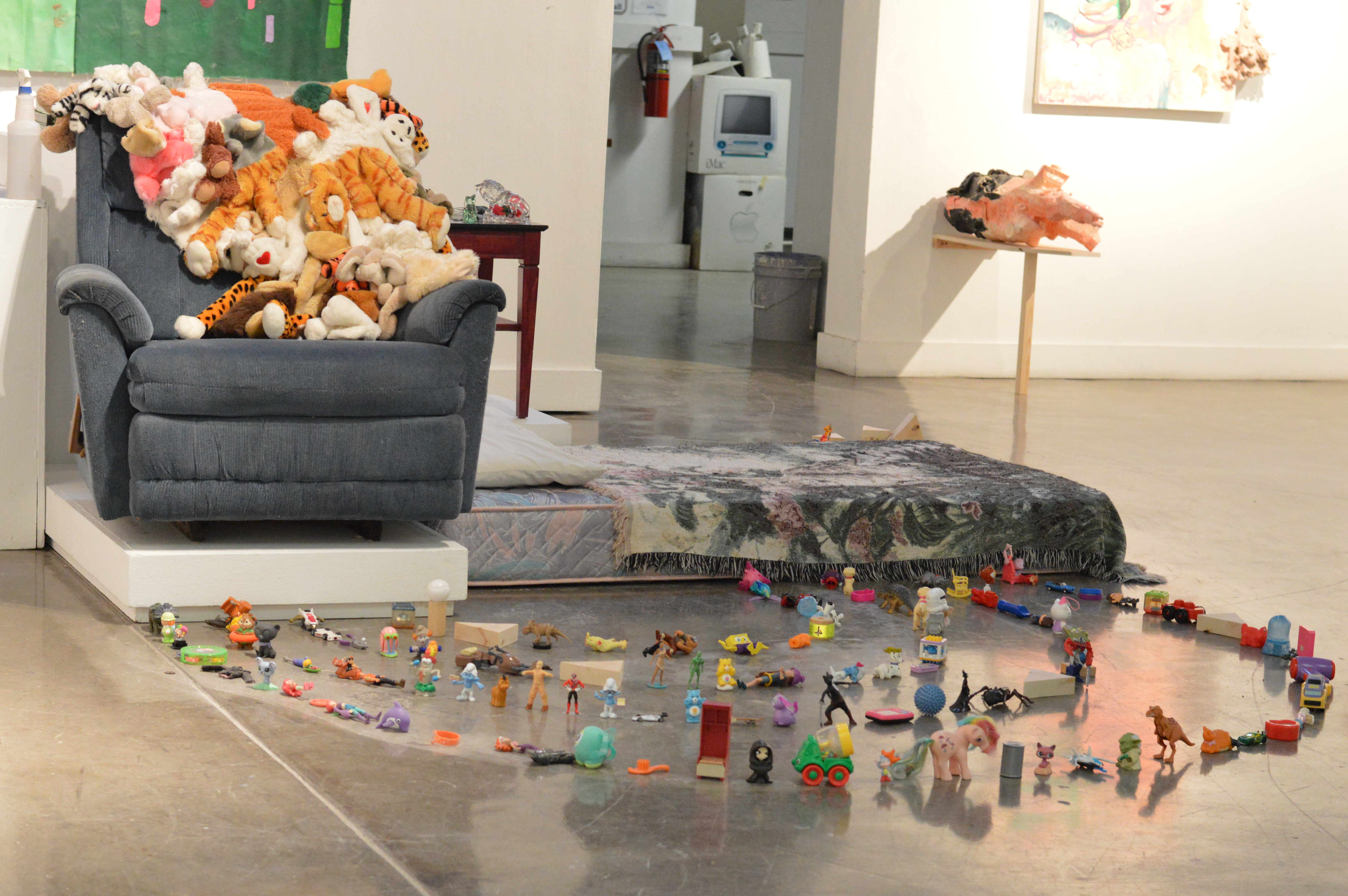 When he was four years old, Val Curry’s teacher noticed his love for creative projects and crafting beauty. In fact, after several days of coloring, Curry approached his teacher and boldly told her he was going to be an artist.

Now a graduate from the School of Arts and Technology, Curry is presenting his exhibition, “A Moving Target,” alongside Art and Performance senior Luke Harnden’s exhibition, “An Old Friend,” at the main gallery of the Visual Arts Building from Jan. 23 to Feb. 7.

“These guys are past their breaking points,” said senior ATEC lecturer Greg Metz. “They are going to be artists.”

For Curry, his hope was to revive the childlike curiosity and playfulness that seemed to slip from his fingertips in the moments of adulthood.

He said his art exhibition was almost like his abstract self-portrait, displaying sculptures, paintings and sketchbooks from his past, the childhood he longed for again.

“I wanted to present to the viewer a representation of myself through the elements that make up my life and through the projects that consume me,” Curry said. “In searching for the direction to take my art in, I never felt content because I realized I was trying to find myself.”

In his exhibit, Curry has displayed writings and drawings from when he was a child and also, an illustration of a home environment including toys, plants and a book shelf surrounded by sculptures.

He arranged the toys to where they symbolized a playful spirit and curiosity, while also, acting as a visual element with their texture, colors and shapes. It was like placing iron filings on a magnet and seeing the magnetic lines, Curry said. He incorporated his captivation with this concept of magnetic forces into his arrangement.

“As an artist, we try to retain that fascination of being a kid, looking at the most mundane things fresh,” Curry said. “I thought it was interesting to have that rawness of an untrained artist contrasting to the artwork of when I went back to school.” Art and Performance senior Luke Harnden includes projected light displays as part of “An Old Friend,” his exhibition in the Visual Arts Building.

Like Curry, Harnden also shares a connection to the materials he uses to create his artwork. He said the title, “An Old Friend,” could also refer to the Visual Arts Building because of the relationship that has developed for Harnden with the building throughout the years.

Harnden said the focus in his exhibition was on the act of mark making – one of the most important forms of human expression. The imagery in his exhibition is hypnotizing in its intricate arrangements of marks that appear almost unreal and digital.

At first glance, his exhibition is meant to feel innocuous, appearing as monochromatic, straight-lined canvases that are innocent and easily dismissible, Harnden said. It isn’t until one stops and ponders the process behind the painting when the painting’s real effect embarks.

“I think it’s important to have the ability to be fascinated by everything and to see the world differently, but you also have to think about how this is going to translate into a bigger idea that people can understand, or maybe you can understand,” Harnden said.

Whether they are intentional or not, marks are the visible results of a relationship between a subject and an environment, Harnden said.

It is similar to the tire marks on a road, the raindrops on a pond, or more directly connected to Harnden – the pencil marks on a paper. The histories of these relationships remain imprinted even after the source is no longer present, the action irreversible and transformative, yet seemingly ordinary.

Harnden said “An Old Friend” refers to this timeless process of mark making, while also considering the status of this process in an age when even the most common forms of mark making, such as writing, have been largely replaced by a more efficient means of technology.

“I like for things not to be explicit, so that can add some room for interpretation,” Harnden said. “Each line has its own characteristic, as well as operating in a system with the other lines. There’s this tension between whether it’s handmade manually or created through a system, or coding of some sort, but they are the result of a personal relationship to the physical world.”

Raised by an artist mother, Harnden was introduced to the artist lifestyle early on. He said it has been a lifelong practice, observing his mom’s painting of abstract landscapes.

Metz said he noticed Harnden’s talent in 1998 when he was creating graffiti art on a wall in downtown Dallas. Although Harnden was very young, he was also very good, Metz said.

“Luke is a good example of someone who comes into the program and makes discoveries,” Metz said. “He’s embarking on a process where there’s no way of anticipating what would happen.”

Metz was introduced to Curry 10 years ago after spotting his artwork at an alternative art circuit he was attending. He describes Curry as a harebrained researcher, eclectic and interested in everything.

“Val is as much of a piece of art as the things he creates,” Metz said. “He’s not afraid to try things out, and that’s the kind of interesting artist and researcher that really emphasizes that there is a kind of randomness in the universe that we as individuals bring together.”

Metz said every time he enters into either artist’s studio, he is surprised by how much they have began to trust in themselves and in their intuition.

“Artists are never truly confident,” Metz said. “As an artist, you like to scare yourself to keep your sensibility sharpened and to keep yourself on the lookout. But true artists are always going to find an influencing niche in life they work to perfect and a goal that they have some creative control to exercise and practice.” 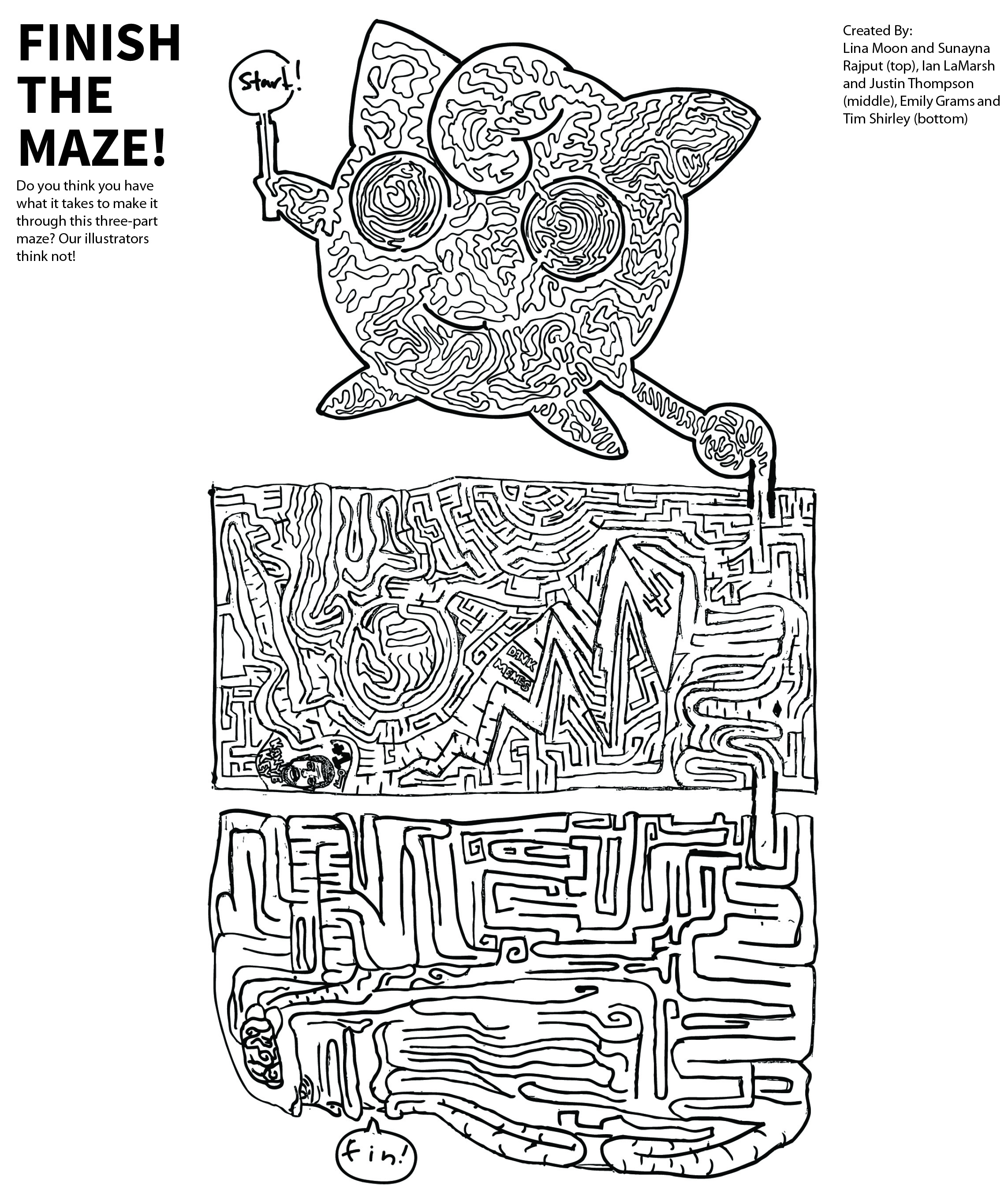